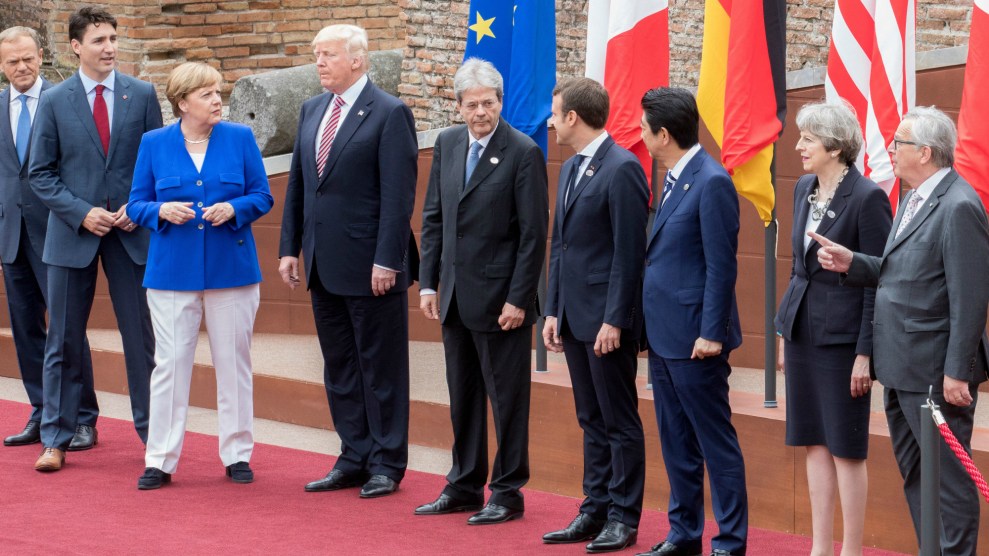 Update, May 27, 2017: The G7 broke with tradition to release an unusual statement where six nations reaffirmed the Paris climate agreement, without the US. “The United States of America is in the process of reviewing its policies on climate change and on the Paris Agreement and thus is not in a position to join the consensus on these topics,” the communiqué reads. “Understanding this process, the Heads of State and of Government of Canada, France, Germany, Italy, Japan, and the United Kingdom and the Presidents of the European Council and of the European Commission reaffirm their strong commitment to swiftly implement the Paris Agreement.”

Trump says he’ll be ready to make a decision on Paris “next week”:

I will make my final decision on the Paris Accord next week!

One year ago Friday, when speaking on a campaign stop in North Dakota, Donald Trump declared he’d “cancel” the Paris climate agreement within 100 days of his presidency, framing it as a “bad deal” that undermines domestic interests. The 100 days have passed, but his unfulfilled pledge hangs over the G7 meeting in Italy.

Trump has already appeared to push a NATO leader aside in Brussels and caused a diplomatic scuffle in Italy after accusing Germany of being “very bad” on trade. But his decision on Paris is far more significant, especially in terms of the response of the 195 signers of the 2015 agreement. The question is whether the rest of the world sinks to the low bar that Trump has set, and the G7 is the first key test. On the one hand, Trump’s resistance may force the G7 to downgrade its climate ambitions and show how US denial is already taking its toll on the global stage. On the other, a G7 that reaffirms Paris goals would demonstrate that the rest of the world won’t be dragged down by America’s new president.

“I think what the other countries are concerned about is that there is not any question about the rest of the industrialized countries raising ambition over time,” says Union of Concerned Scientist’s Director of Strategy and Policy Alden Meyer, who’s followed global climate negotiations for more than 20 years. “That’s why this is so tricky to go along with the US’s minimalist demands in negotiations.”

“I think what the other countries are concerned about is that there is not any question about the rest of the industrialized countries raising ambition over time.”

After world leaders from Germany, France, Canada, Japan, Italy, and the United Kingdom meet on Friday, senior officials will gather to hammer out a text to try to represent a unified front, with global warming usually ranking among the top priorities. Climate change may not be important to Trump, who’s regularly called it a hoax, but it is to leaders of the G7—and has been for a long time. Meyer, who’s followed global climate negotiations for more than 20 years, points to 2005 as when concerns began, but David Waskow, World Resources Institute’s International Climate Initiative director, says the focus extends even further back, receiving some mention in every G7 text for the last three decades.

That’s not to say there were never any disagreements. In 2015, Canada, home to carbon-intensive tar sands and then led by the conservative Stephen Harper, resisted strong climate goals but eventually agreed to a long-term decarbonization target that involved phasing out fossil fuel use by the end of the century. Japan, which has higher emissions than most countries in the G7, save for the United States, has also historically resisted stronger climate language and has become more reliant on coal ever since it mothballed nuclear plants after the 2011 Fukushima disaster. Yet both these countries have changed. Canada’s Prime Minister Justin Trudeau is more committed on climate change than his predecessor was, and Japan has vowed to fulfill its pledges in the Paris agreement. European countries, especially Germany, are expected to take on new leadership in climate negotiations. France’s new President Emmanuel Macron urged Trump in Brussels on Thursday not to abandon the deal.

“We’re seeing a much broader set of actors playing a real leadership role,” says Waskow. “It ranges from major emitters, like the EU, China, and Canada coming together, to many of the most vulnerable countries, to many countries in between, as well as cities, states, and businesses. It’s no longer dependent on one or two countries playing that leadership role.”

But Trump could change everything. The United States is still the major polluter in the G7, at 18 percent of global greenhouse gas emissions, according to self-reported data to the United Nations, and second in the world only to China. France, Italy, and Canada are each responsible for less than 2 percent of global emissions, and Germany and Japan’s slightly higher emissions hardly compare to pollution in the United States. If it were up to Trump, the G7 would probably break its tradition on climate change and ignore the issue entirely. His administration is divided on the Paris decision, and the uncertainty has spilled over into other international negotiations.

Even if the United States remained in the agreement, it would likely push for lower engagement across the world, urging countries to include language that recognizes the long-term dominance of fossil fuels, which the oil, gas, and coal industries would appreciate seeing. In a Wall Street Journal op-ed earlier this month, Rep. Kevin Cramer (R-N.D.), who was an energy adviser on Trump’s campaign, argued that the United States should advocate “advancing technology for clean coal and pushing for increased investment and a better regulatory environment” in future climate talks.

On the other hand, the United States will face pressure to flip on Trump’s insistence that we do nothing. We saw that at an Arctic Council meeting with Nordic countries, Russia, and Canada earlier this month, where Secretary of State Rex Tillerson agreed to text that loosely reaffirmed the Paris climate agreement and global action to cut greenhouse gas emissions. Headed into the Arctic Council, it wasn’t clear if the United States would attempt to remove language on Paris entirely.

Meanwhile, the world waits for Trump to decide: recommit, drop out, or come up with some understanding for continued engagement.

“Some of the Europeans seem to think he may make a decision on the spot in the [G7] meeting,” Meyer says. “No one obviously knows. Maybe even including him.”