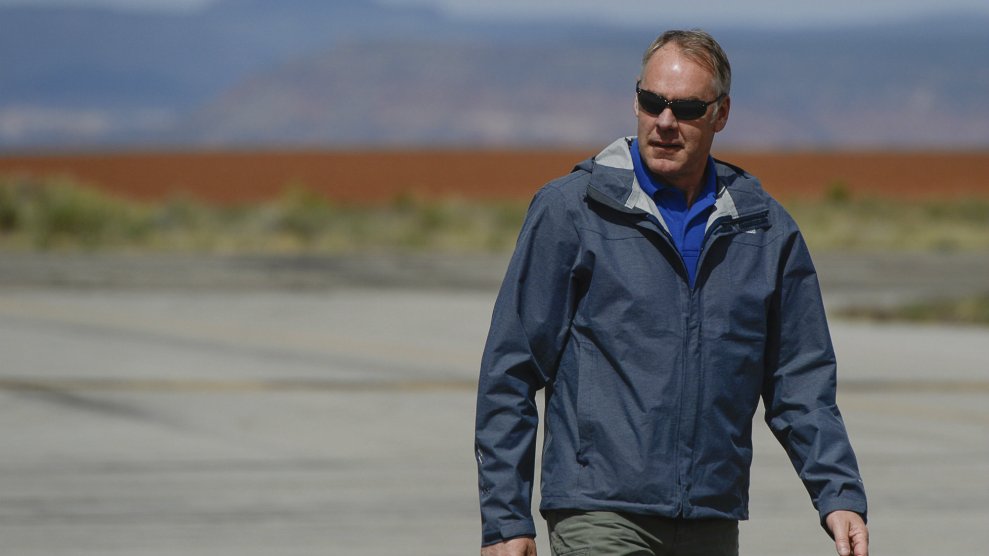 WASHINGTON — With the Trump administration’s hard push for increased fossil fuel production, it may come as little surprise that Interior Secretary Ryan Zinke would address the American Petroleum Institute, an oil and gas industry trade group.

But the location of a March 23 API board of directors meeting, where Zinke was a guest speaker, is raising eyebrows. As a recently published log of the interior secretary’s scheduled meetings shows, the speech was held at Trump International Hotel in Washington, which has been at the center of conflict-of-interest concerns.

The half-hour talk was listed on Zinke’s schedule as: “Address API Board of Directors Meeting.”

Of all Zinke’s meetings with energy industry representatives, the API event was the only one held at a location that financially benefits President Donald Trump, the nonprofit watchdog group Citizens for Responsibility and Ethics in Washington noted in a post Monday.

Trump’s D.C. hotel, which occupies the historic Old Post Office under a 60-year lease with the federal government, has been attacked as an obvious conflict of interest for the president. The hotel has drawn scores of foreign dignitaries and lobbyists since Trump’s election.

Details about the March 23 meeting, including who was present and what Zinke discussed, are not provided in the Interior Department’s calendar entry. While it’s possible Zinke addressed the board via phone or video call, the listing appears to indicate he attended in person.

Neither the Interior Department nor API responded to HuffPost’s request for comment Monday.

Zinke, like Environmental Protection Agency head Scott Pruitt, has emerged as an oil-loving administration ally of the fossil fuel industry. He said in April that Trump’s executive order aimed at opening now-protected areas of the Arctic and Atlantic oceans to oil and gas development would “cement our nation’s position as a global energy leader.”

Zinke, who’s tasked with managing some 500 million acres of federal land, has also compared oil drilling to hunting and fishing, and has suggested natural areas can actually benefit from the extraction of oil, gas and minerals. “We can responsibly develop our energy resources and return the land to equal or better quality than it was before extraction,” he wrote in a May op-ed for the conservative Washington Times.

Zinke, a former Montana congressman and Navy SEAL, was confirmed March 1 as interior secretary. API President and CEO Jack Gerard said after Zinke’s nomination in December that Zinke “knows the great potential that our federal lands hold when it comes to developing our nation’s energy resources.”

Gerard told The Washington Post last month that Zinke “has been open to constructive dialogue and has shown a willingness to work with all stakeholders.”

Four days after Zinke’s appearance at API’s board meeting, Trump signed an executive order to roll back Obama-era policies meant to curb global climate change, namely the Clean Power Plan, which limited greenhouse gas emissions from power plants. Zinke praised the order in a statement, saying Trump “took bold and decisive action to end the War on Coal and put us on track for American energy independence.”

The order was among a number of Trump actions celebrated by API.

API spent $2.7 million lobbying in the first quarter of 2017. Those efforts targeted the Interior Department on a number of issues, including offshore drilling and national monument designations.