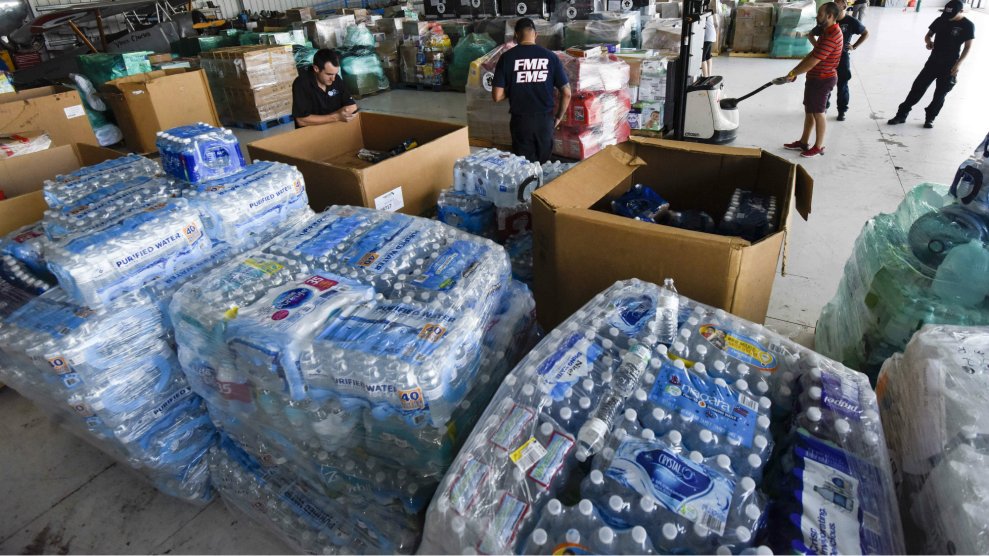 Last week, Hurricane Maria slammed into Puerto Rico as a powerful Category 4 storm, bringing with it 20 inches of rain and 155 mile-per-hour winds. Much of the island was devastated: Nearly all of the 3.4 million people on the island lost power, 80 percent of the agriculture was decimated, and the storm is responsible for 16 deaths so far. The mayor of the capital city of San Juan says residents are living in “near-death conditions.”

The storm is testing Puerto Rico’s already fragile water infrastructure. About 1.5 million people—44 percent of the island—are without clean drinking water and are relying on water bottles or unsafe water sources for cleaning, drinking, and cooking. FEMA says it has transported about 6 million liters of water to Puerto Rico and the US Virgin Islands (which were recently battered by Hurricane Irma). The Mayo Clinic recommends two or three liters of water per day for drinking alone.

Hurricane Maria led to vast power outages, causing pumps at water treatment plants to fail across the island. After loss of water pressure, especially in a water system that’s as aging and leaky as Puerto Rico’s, there’s an immediate threat of bacteria and other contaminants seeping into the water supply. “The lack of ability to treat the water means that the raw sewage and floodwaters can contaminate the drinking source,” says Erik Olson, a lawyer at the Natural Resources Defense Council.

For many communities, clean drinking water won’t be available until the electricity returns. It’s unclear when power will be fully restored, but Olson says “some areas may be waiting four to six months.”

“There are a lot of supplies that are at the airport and the ports, but it’s difficult to get it where it’s needed.”

Even before Maria, Puerto Rico’s water system was in extremely poor shape. According to the Natural Resource Defense Council, the island has the worst rate of drinking-water violations of any state or territory. In 2015, 99.5 percent of Puerto Ricans got their water from systems that had violated the Safe Drinking Water Act, the federal law that regulates toxic chemicals in the US water supply; nearly 70 percent, or 2.4. million Puerto Ricans drank water from systems that had SDWA health violations. “We’re certainly concerned that it’s going to get worse” after Maria, Olson says.

In the meantime, Puerto Ricans are trying to sustain themselves with bottled water. FEMA is on the ground with supplies, but with badly damaged roads and bridges, some communities are completely cut off from the supply chains and running dangerously low on water. “There are a lot of supplies that are at the airport and the ports,” Ramon Cruz, an environmental policy analyst, explains, “but it’s difficult to get it where it’s needed.”

Another option for water is the grocery stores that have been able to reopen. However, store owners are making sure there is enough to go around. “The few supermarkets that are working are rationing everything right now,” says Cruz, “which is good because you can reach more people but you have limited access.”

In 2015, 99.5 percent of Puerto Ricans got their water from systems that had violated the Safe Drinking Water Act.

People without the ability to get to an open grocery store have been collecting water from open or leaking pipes, but that water may be contaminated. “That water is often coming from shallow groundwater which is very susceptible to sewage and other contaminates,” Olson explains. “But it’s understandable because people are desperate.”

Aid workers, politicians, and Puerto Ricans have been criticizing the Trump administration for taking so long to waive the Jones Act, a regulation that requires items shipped between American ports to be transported in ships that are American-owned and manned by Americans. The law is often waived in disasters in order to allow for faster shipment of supplies, and the Trump administration lifted it in the wake of Hurricane Harvey for Texas. “Waiving the Jones Act is key,” Cruz says. “Cuba and the Dominican Republic would like to help. Those countries could come with bottled water and filters.” Trump has lifted the shipping restrictions for 10 days; perhaps more supplies can reach desperate Puerto Ricans.

However, no amount of supplies can stop some toxins from getting into the water system. Puerto Rico is home to a five-story-high pile of coal ash, the byproduct of burning coal. “When it gets wet, it can seep into the ground water and cause contamination,” Mekela Panditharatne, an NRDC lawyer says. The pile is located in the southern region of the island, next to a low-income community.

When water service returns, Puerto Ricans may not still be in the clear. The water system will likely be riddled with contaminants and toxins. “You don’t have to have a huge water upset to create a very serious problem,” says Olson. In 1993, Milwaukee’s water supply was compromised after the system’s filters stopped working properly. More than 400,000 people were sickened and 69 people died. “This is the kind of thing that happens when a source water becomes contaminated,” says Olson.