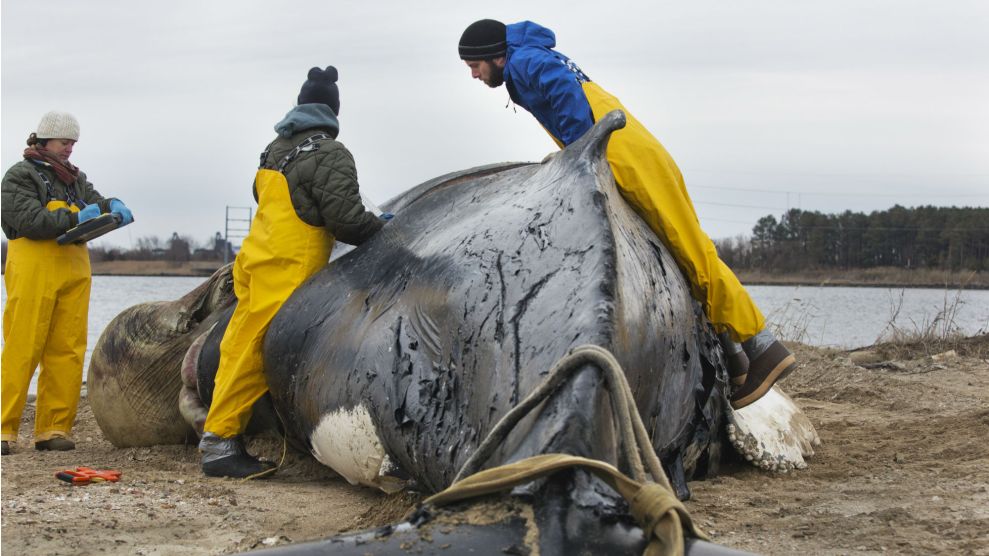 Scientists examine a dead juvenile humpback whale in in Portsmouth, Virginia in February 2017. The' N. Pham/AP

There are only about 450 individual North Atlantic right whales left in the wild—and the ones remaining are in serious peril. The species is dying in record numbers and the National Oceanic and Atmospheric Administration declared in June that a recent spike in right whale deaths, 17 just last year, is being considered an “unusual mortality event.” Although NOAA hasn’t yet concluded the cause of this event, most of the deaths, experts say, have been due to commercial fishing activity.

But now things are getting even worse: Researchers are claiming they haven’t spotted any newborns in their usual warm-water calving grounds off the Florida-Georgia coast this winter, their usual birthing season.

“If they stop having babies—and we keep killing them at the rate we are—then we’ll have an extinction.”

“The math does not look good,” Scott Kraus, the vice president for research at the New England Aquarium, tells Mother Jones. “If [right whales] stop having babies—and we keep killing them at the rate we are—then we’ll have an extinction.”

While the right whale has been in decline since 2010, President Donald Trump’s Department of Commerce, as we reported last month, is being blamed, at least in part, for the disturbing trend due to its allegedly slow response in addressing the problem. At least two lawsuits against the Trump Administration were filed so far this year in the US District Court for the District of Columbia: one from the Humane Society, the Center for Biological Diversity, and Defenders of Wildlife, and another filed by Earthjustice and the Conservation Law Foundation.

“The right whale situation has really become a crisis,” Kristen Monsell, lead attorney on the lawsuit on behalf of the Humane Society, the Center for Biological Diversity, and the Defenders of Wildlife, told Mother Jones last month. “2017 was just an absolutely devastating year for the species.” The lawsuit alleges that the Department of Commerce is in violation of the 1973 Endangered Species Act and the 1972 Marine Mammal Protection Act over its management of the North Atlantic lobster fishery, which “frequently entangles right whales” in fishing gear.

“As has happened once before, when there was a near complete failure of reproduction in 2000, we could have 40 young produced next year.”

The average number of right whales born each year is 17. But because adult female whales only give birth about once every three years, fluctuation in calving rates is natural, and there’s hope that next year could look better. “For the last five or six years, there are whales sitting around biding their time, trying to build up the body storage to reproduce,” Richard Pace, a research wildlife biologist with NOAA in Woods Hole Massachusetts, tells Mother Jones. “As has happened once before, when there was a near complete failure of reproduction in 2000, we could have 40 young produced next year.” (In 2000, only one right whale calf was born, and then 31 in the following year.)

North Atlantic right whales aren’t the only whale species conservationists are worried about. In April, NOAA declared an “unusual mortality event” in the case of the humpback whale and, in January, for the minke whale.

Still, the rise in right whale deaths, and the lack of recent births, has been a kind of wake-up call for the fishing and shipping industries, says Kraus. “I feel optimistic. It serves to focus the mind of the industry,” he says, and is hopeful that, with regulation and “cultural change” in the industry, the whales can recover.