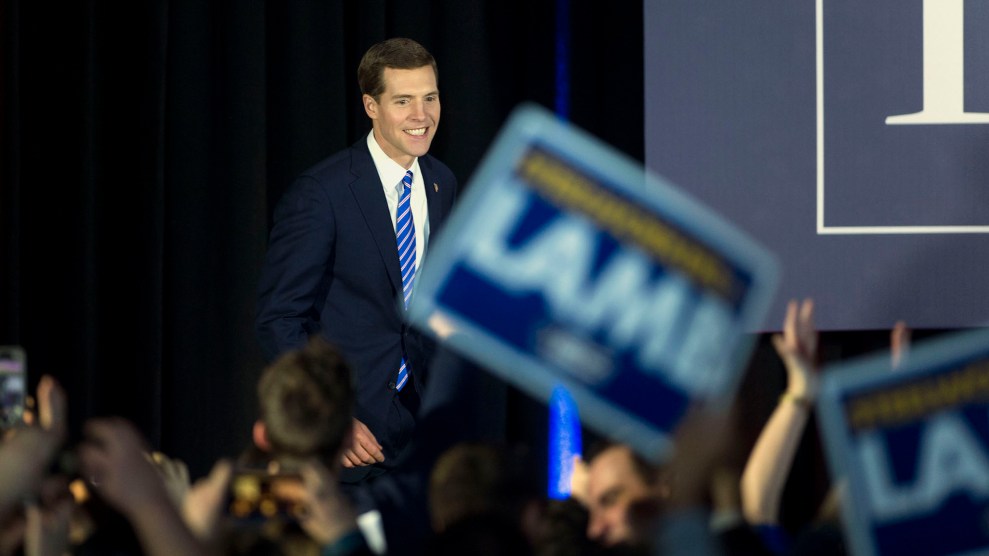 A few days before Democratic candidate Conor Lamb eked out a narrow lead over Republican opponent Rick Saccone in Pennsylvania’s special election for the House, President Trump was on the campaign trail repeating a familiar tune to crowds of his supporters. “By the way folks, some of you who are in the coal world,” Trump said. “Your coal is coming back. Big, big, big, big.”

In 2016, the fantasy of a revived coal industry worked, helping Trump carry the same district by nearly 20 points despite the fact that the local United Mine Workers Association did not endorse anyone for the presidential race. But in the days leading up to Tuesday’s election, it was Lamb who got a bump from the UMWA. The union’s support wasn’t about bringing shuttered plants back to life, but focused on an old policy debate over how to ensure nearly 90,000 ex-miners still get their pensions even when the coal industry is going bankrupt around them. Congress may be voting on legislation to address the issue before the end of the year.

In the week before election day, UMWA’s national president President Cecil Roberts had endorsed Lamb at a campaign stop with labor union members, noting his full support for coal miner pensions as a deciding factor. As the Washington Post reported, Saccone didn’t even try to outflank Lamb on the issue of pensions: “On Monday, as he campaigned at Canonsburg’s famous Sarris Candies with Trump Jr., Saccone dodged a question about the bill on miners’ pensions and accused a reporter who asked about it of talking to ‘liberals’ instead of real miners.”

Indeed, the UMWA saw Saccone as dismissive of the issue. In a press release issued Wednesday, they pointed out he seemed to prefer “to eat ice cream rather than answer whether he supported the American Miners’ Protection Act.”

“They may still agree with the President about a lot of things, but they know that if they lose their pension they will be scrambling just to survive.”

After Tuesday night’s results came in, UMWA’s Roberts acknowledged in a statement that many of the local members probably had voted for Trump or not voted at all in 2016. “They may still agree with the President about a lot of things, but they know that if they lose their pension they will be scrambling just to survive,” he said. “All the other things any politician is doing or saying fall by.”

Concern over pensions was actually a minor issue in the 2016 presidential election. As Natalie Schreyer reported then for Mother Jones:

The dispute has its roots in 1946, when, in response to a massive coal strike, the Truman administration nationalized the mines. In order to end the strike, then-United Mine Workers of America union president John Lewis and Interior Secretary Julius Krug worked out a deal in which coal companies would pay royalties into a pension fund for retired miners and would also contribute money (deducted from miners’ paychecks) into a health insurance fund.

In recent years, the pension and health care funds have lost much of their value as coal mines have closed, companies have declared bankruptcy amid cheap natural gas prices, and the 2008 financial crisis gutted many pension funds. Some troubled companies have offloaded workers’ benefits into volatile offshoots that don’t always honor commitments to health and pension benefits. Phil Smith, a union spokesman, told Schreyer, “As coal firms slashed their workforces, the amount of money being paid out in retirement benefits surpassed the amount coming in.”

If the UMWA fund runs out of money, Congress would play an important role. The federally backed Pension Benefit Guarantee Corporation would foot the bill, but it too could run out of money and require taxpayer bailout. They would have to juggle a number of competing demands, not just from former coal miners, but multi-employer pensions in other declining industries.

The UMWA has lobbied for federal intervention for years, and while there’s bipartisan support for it, congressional action has languished. Senate Majority Leader Mitch McConnell blocked a vote on one fix at the end of 2016. There have even been a few proposals that would not have increased the budget deficit. According to the Washington Post, one intervention would have charged slightly higher “merchandise processing fees” for importers in 2025. Congress last year scraped together a solution at the last minute for the 22,000 ex-miners who were about to lose health care benefits, but the pensions issue remained in limbo.

In 2018, Congress has created a bipartisan 16-person committee comprised of House and Senate members to come up with solutions to the problem. They aren’t just looking at pensions for coal miners, but multi-employer pension funds in other industries backed by the Pension Benefit Guarantee Corporation, and potentially affecting 1.5 million workers in states like Kentucky, Michigan, Ohio, Missouri, West Virginia, and Wisconsin. The committee’s first hearing was the day after the Pennsylvania election, as it worked towards a bill that can be put to a vote before the end of the year.

This issue could come up again in other districts with deep coal roots. And as Tuesday’s election shows, it might even be a deciding factor in places where Trump triumphed in 2016.