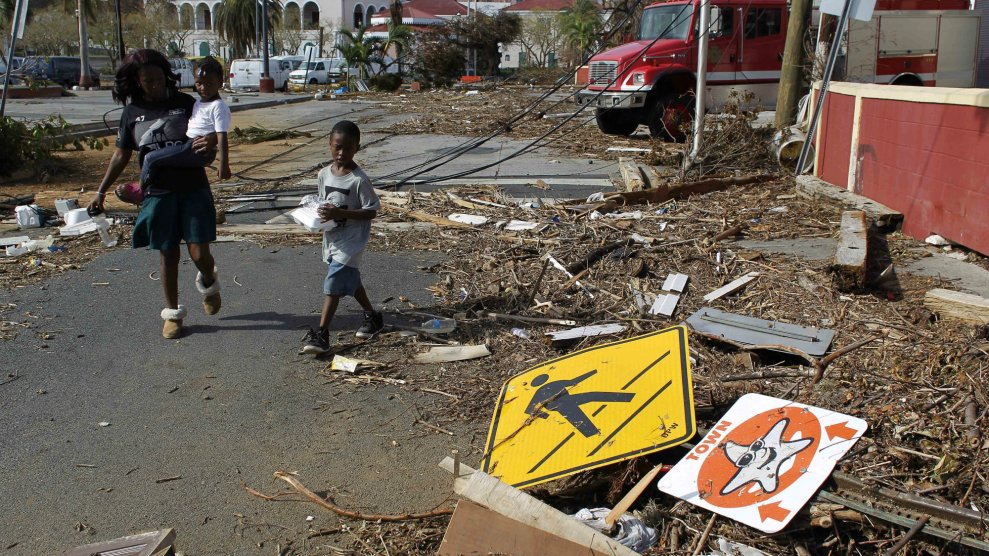 A woman and her two children walk past debris left by Hurricane Irma in Charlotte Amalie, St. Thomas, US Virgin Islands, in September 2017. Ricardo Arduengo/AP

Aurio Correa entered the hospital on the island of St. Thomas last August to prepare for knee surgery. The 89-year-old Virgin Islander had Alzheimer’s disease and dementia but was otherwise in good health for his age, according to his daughter, Luz Correa Chesterfield.

Before he could have the surgery at Schneider Regional Medical Center, Hurricane Irma struck the US Virgin Islands in the early hours of September 6. The Category 5 hurricane ripped through the island territory, which includes St. Croix, St. John, St. Thomas, and several minor Caribbean islands, with winds reaching 185 miles per hour.

The islands’ emergency plan was for patients and vulnerable people like Correa to shelter in place when the hurricane made landfall. But the storm badly damaged the two hospitals on the islands. “We had no idea the type of devastation that was going to occur to our hospitals and other clinical facilities,” USVI Health Commissioner Michelle Davis says.

With its health care system crippled, the Virgin Islands government, along with federal relief agencies, decided to move patients. Correa was flown to nearby Puerto Rico. Less than two weeks later, with Hurricane Maria approaching, some of the medical evacuees were moved again, this time to the mainland.

In total, more than 1,000 medical evacuees have been sent off the Virgin Islands, including critically ill patients, dialysis patients, people in nursing homes, and their caregivers, Davis says. The National Disaster Medical System, a federally coordinated partnership between the Departments of Health and Human Services, Homeland Security, Defense, and Veterans Affairs, helped cover the cost of care and housing for 803 of the evacuees. The costs for the other 200 individuals have been picked up by the government, private insurance, or other sources, Davis says, and medical evacuations are still ongoing.

The majority of medical evacuees were sent to Atlanta, with some elsewhere on the mainland or in Puerto Rico. Nine months after Hurricane Irma, the whereabouts of many medical evacuees are unknown. And the Virgin Islands, still struggling to rebuild in the aftermath of the hurricanes, can’t accommodate all of those who want to come back home.

Only 147 individuals taken off the islands remain under the government’s care, Davis says, while 51 have passed away. The rest have left the emergency health care system. “We are checking up on as many evacuees as we can find,” she says.

More than 1,000 medical evacuees have been sent off the Virgin Islands, including critically ill patients, dialysis patients, people in nursing homes, and their caregivers.

Iffat Walker, a Virgin Islander and founder of the civic action group Community Action NOW, has been volunteering to help the dozens of medical evacuees sent to Georgia. She calls their arrival a disaster. “Everything was disjointed,” she says. “We have been more involved in this process than the Virgin Islands government, and that is shameful.”

Some evacuees arrived without identification or medical records. Their paperwork was carried in plastic pouches around their necks. “They were being moved in rain, in windy conditions, and many of them lost their medical records,” Walker says. “A lot of them came here with no shoes, only the clothes on their backs, and no identification.”

Davis, whose department was involved in orchestrating the evacuations, says it’s true that some evacuees arrived without their records. “We were just trying to get people out of here,” she says. “Some had clothing, some had money, some had medical records, some didn’t.”

Eva Davis, a 61-year-old from St. Croix, was airlifted to Atlanta in November. Davis (no relation to the health commissioner) was showing signs of rejecting a kidney transplant she had received years earlier and couldn’t get the treatment she needed on the island. After spending a week at a hospital in Atlanta, she now lives in a hotel paid for by the US government. Next month, she plans to leave the hotel and stay with family in North Carolina. “They wanted me to get out of here earlier,” she says. “It’s been stressful, but I am just thankful that I have someplace to stay.” As with other medical evacuees waiting to return home, her house is still damaged from the storms, and there are few affordable places available to rent on the island.

“They all want to go home,” Walker says. “But it is not safe medically for them to go home.”

The islands’ only hospitals are currently offering “less than 40 to 60 percent of their services,” Michelle Davis estimates. On the largest island, St. Croix, the roof of Juan F. Luis Hospital and Medical Center was nearly destroyed during the hurricanes, and the building was badly damaged. The hospital can’t do any high-level surgeries or dialysis, and only a fraction of the beds in its emergency room are available, according to Davis. The only other hospital on the US Virgin Islands, Schneider Regional Medical Center on St. Thomas, suffered major structural damage and can provide only limited inpatient care, emergency services, and dialysis.

A Kaiser Family Foundation report six months after the storms found that many health care providers were migrating off the islands, and more than 170 employees had left Schneider Regional Medical Center. Many private providers have closed, according to the report.

This year’s hurricane season started on Friday, though the strongest storms tend to hit the Caribbean in late summer and fall. “We are going into the new hurricane season with hospitals that are in worse shape than before Maria and Irma,” says USVI Sen. Nereida Rivera-O’Reilly. “The situation before the hurricanes was pretty bad. Since the hurricanes, it has gotten worse. As of today, it’s abysmal.”

O’Reilly said some evacuees have also been forced to go back to the islands even though their homes are damaged. “Every day, our office fields calls from the medical evacuees or a relative,” she says. “Yesterday, we got a call from a dialysis patient who is going to be sent back home.”

The territory’s governor, Kenneth Mapp, has said both hospitals will probably need to be torn down and rebuilt, though a Federal Emergency Management Agency spokesperson said in an email that the agency is still working with the USVI government to “determine the best course of action.” Portable hospital units and dialysis trailers were supposed to be ready before hurricane season. The temporary facilities, which could help avoid off-island evacuations and allow more patients to come home, are now more likely to be ready by late summer or fall, according to Davis. “Basically, our entire public health and health care system was devastated, and the length of time it has taken us to acquire our temporary facilities was much longer than anticipated,” she says.

After the hurricanes, more than 33,000 of the territory’s 103,000 residents applied for assistance from FEMA. As of March, US agencies had spent $800 million on the Virgin Islands’ recovery.

“The federal plan and playbook are not written for territories,” says USVI Health Commissioner Michelle Davis.

For this upcoming hurricane season, FEMA and the USVI are drafting response procedures, including a medical evacuation plan that has yet to be released. Gov. Mapp said at a meeting with territory officials last month that evacuating Virgin Islanders to Puerto Rico is no longer an option because the island “is still struggling, and we need to ensure our patients will get the best care.”

“If we ever have to have this type of mass evacuation again, we are thinking that it may run a little more smoothly working with the states than with the federal government,” Davis says. “The federal plan and playbook are not written for territories. They are written for those contiguous 48. When you are a territory surrounded by water, everything has to be shipped in and flown in.”

As for Aurio Correa, his daughter said at a USVI Senate hearing on medical evacuees in April that her father “was treated like an animal” when he was sent to Puerto Rico.

When she visited her dad, his body was covered in bed sores and his own feces. He was still wearing the same red shirt her family dressed him in days before. A few months later, he passed away. “Up to this day, they can’t tell us exactly when my dad died,” she said.

She begged lawmakers and health and hospital officials at the hearing to do better.

“When the next hurricane season comes around, please have a good plan,” Correa Chesterfield said. “Don’t let our loved ones suffer like they did.”