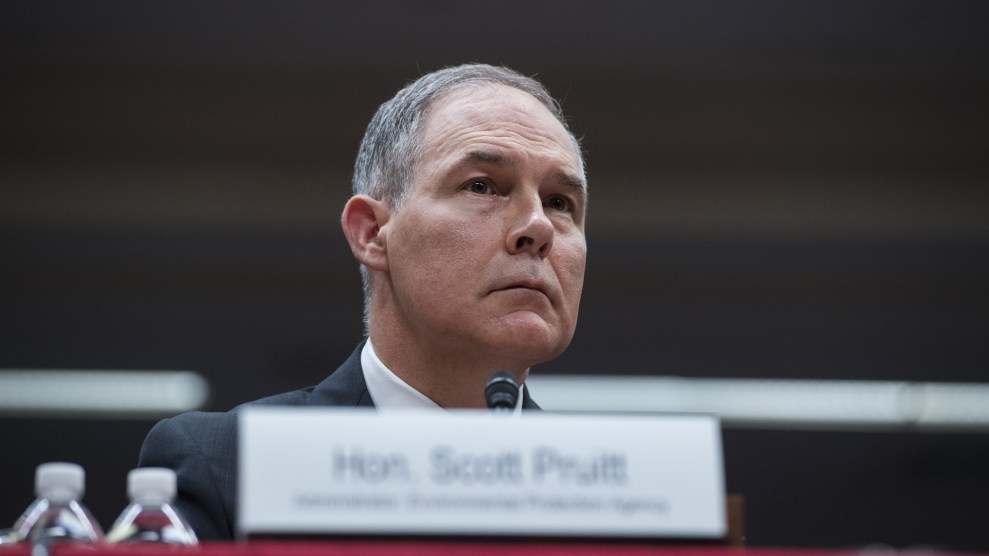 President Donald Trump tweeted on Thursday that he accepted Environmental Protection Agency administrator Scott Pruitt’s resignation. Andrew Wheeler, who worked as a coal lobbyist before being confirmed by the Senate in April for deputy EPA administrator, will succeed Pruitt.

Fox News first obtained Pruitt’s resignation letter to Trump. Taking a jab at the dozens of media reports on his controversies and use of public funds for private gain, which Pruitt characterized as “the unrelenting attacks on me personally, my family,” Pruitt spends most of the letter praising Trump for his deregulatory agenda. In a reference to his conservative evangelical faith, he wrote that he believes Trump is “President today because of God’s providence,” and added, “That same providence brought me into your service.”

Mr. President, it has been an honor to serve you in the Cabinet as Administrator of the EPA. Truly, your confidence in me has blessed me personally and enabled me to advance your agenda beyond what anyone anticipated at the beginning of your Administration. Your courage, steadfastness and resolute commitment to get results for the American people, both with regard to improved environmental outcomes as well as historical regulatory reform, is in fact occurring at an unprecedented pace and I thank you for the opportunity to serve you and the American people in helping achieve those ends.

That is why is hard for me to advise you I am stepping down as Administrator of the EPA effective as of July 6. It is extremely difficult for me to cease serving you in this role first because I count it a blessing to be serving you in any capacity, but also, because of the transformative work that is occurring. However, the unrelenting attacks on me personally, my family, are unprecedented and have taken a sizable toll on all of us.

My desire in service to you has always been to bless you as you make important decisions for the American people. I believe you are serving as President today because of God’s providence. I believe that same providence brought me into your service. I pray as I have served you that I have blessed you and enabled you to effectively lead the American people. Thank you again Mr. President for the honor of serving you and I wish you Godspeed in all that you put your hand to.