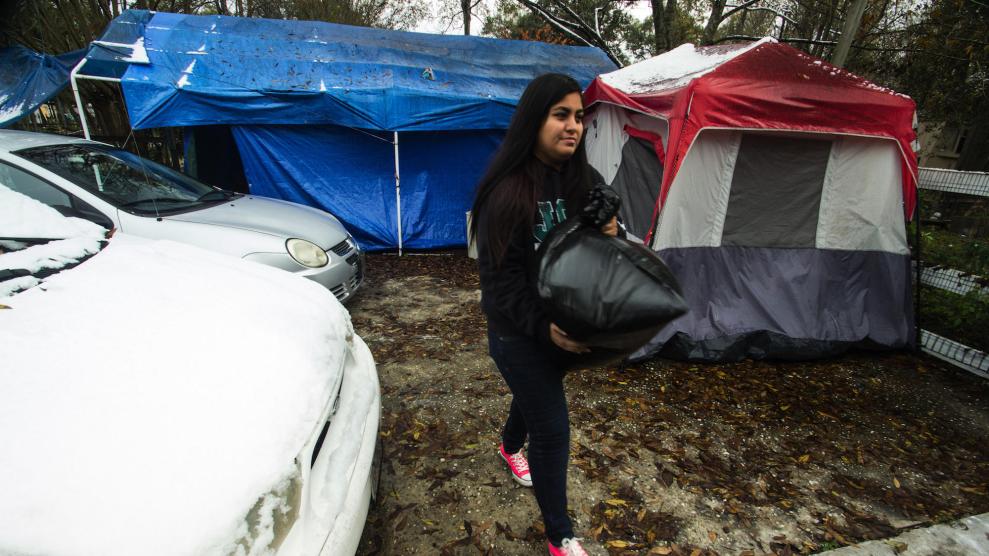 A young woman walks through the parking lot of a Conroe, Texas, house whose owners have installed tents. A thin sheet of snow blanketed the Houston area on December 8, 2017. Alicia L. Pérez/EFE/ZUMA Press

It’s no surprise that a list of places most at risk from climate change and sea-level rise reads like a Who’s Who of global cities, since historically, many great cities have developed near oceans, natural harbors, or other bodies of water. Miami ranks first, New York comes second, and Tokyo, London, Shanghai, and Hong Kong all number among the top 20 at-risk cities in terms of total projected losses.

Cities in the less developed and more rapidly urbanizing parts of the world, such as Ho Chi Minh City and Mumbai, may experience even more substantial losses as a percentage of their total economic output. Looking out to 2050, annual losses from flooding related to climate change and sea-level rise could increase to more than $60 billion a year.

But global climate change poses another risk for cities: accelerated gentrification. That’s according to a new study by Jesse Keenan, Thomas Hill, and Anurag Gumber, all of Harvard University, that focuses on “climate gentrification.” While still emerging and not yet clearly defined, the theory of climate gentrification is based, the authors write, “on a simple proposition: [C]limate change impacts arguably make some property more or less valuable by virtue of its capacity to accommodate a certain density of human settlement and its associated infrastructure.” The implication is that such price volatility “is either a primary or a partial driver of the patterns of urban development that lead to displacement (and sometimes entrenchment) of existing populations consistent with conventional framings of gentrification.”

The study, published in Environmental Research Letters, advances a simple “elevation hypothesis,” arguing that real estate at higher elevations in cities at risk for climate change and sea-level rise appreciates at a higher rate than elsewhere. It focuses on Greater Miami (defined as Miami-Dade County), the area of the country and of the world most at risk from climate change. The authors track the differential in values, between 1971 and 2017, of properties at different levels of elevation and risk from sea-level rise (based on data from the U.S. Geological Survey), while controlling for other factors. They draw from data on more than 800,000 property sales (from the Miami-Dade County Property Appraiser’s Office), including information on property value, building size, year built, bed and bath counts, and tax-assessment values.

The study finds considerable evidence of climate gentrification, and for the elevation hypothesis in particular. Properties at high elevations have experienced rising values, while those at lower elevations have declined in value. In fact, elevation had a positive effect on price appreciation in more than three-quarters of the properties and 24 of the 25 separate jurisdictions the authors examined. The study also found support for a secondary hypothesis, the “nuisance hypothesis,” which posits that price appreciation in lower-elevation places had not kept up with higher-elevation places since approximately 2000 due to nuisance flooding.

Generally speaking, the areas that had the strongest regression coefficients—that is, the places where elevation best predicted the change in real estate prices—are all along the coast and at the highest risk of flooding, as the graphic below shows. They include Key Biscayne, Miami Beach, and a number of exclusive island enclaves, as well as Sunny Islands and Golden Beach to the north.

But these positive associations spanned land-locked communities as well as coastal ones. In fact, more than half of the jurisdictions with positive correlations—13 out of 24—were landlocked. All of these have significant water exposure in the form of lakes and drainage canals. The largest jurisdiction in the sample, unincorporated Miami-Dade County, showed the lowest, but still positive, correlation.

Climate gentrification typically occurs via three main pathways, according to the study.

The first, and most common, is simply where investors start to shift capital to more elevated properties. (The authors dub this a “superior investment pathway.”) The second occurs when climate change raises the cost of living so that only the wealthiest households can afford to stay in place. This is a “cost-burden pathway.” Lower-income households are forced to move away as the escalating costs of insurance, property taxes, and repairs price them out.

The third pathway is when the environment is reengineered to be more resilient. This is a “resilience investment pathway.” The researchers cite the example of Copenhagen: As some of its neighborhoods have been upgraded for resilience, more advantaged households have moved in, and less advantaged, lower-income households have been forced out.

The study confirms an important, and under-emphasized, point about gentrification. It does not simply reflect the preferences and decisions of so-called gentrifiers. It is often the product of larger structural forces and major public investments.

In Miami, the wealthy have long preferred the coasts. But as the risk of climate change grows, this will likely change, with the wealthy colonizing the higher, less flood-prone ground inland and especially in and around downtown. Indeed, as the study shows, it is the higher places—traditionally home to the less advantaged and the poor—that have seen the largest jumps in price appreciation.

As water levels rise and flooding increases, Miami will segregate along new lines, with the poor pushed farther into the region’s hinterlands, or perhaps out of the region altogether—exacerbating the substantial spatial inequality that already defines the region.