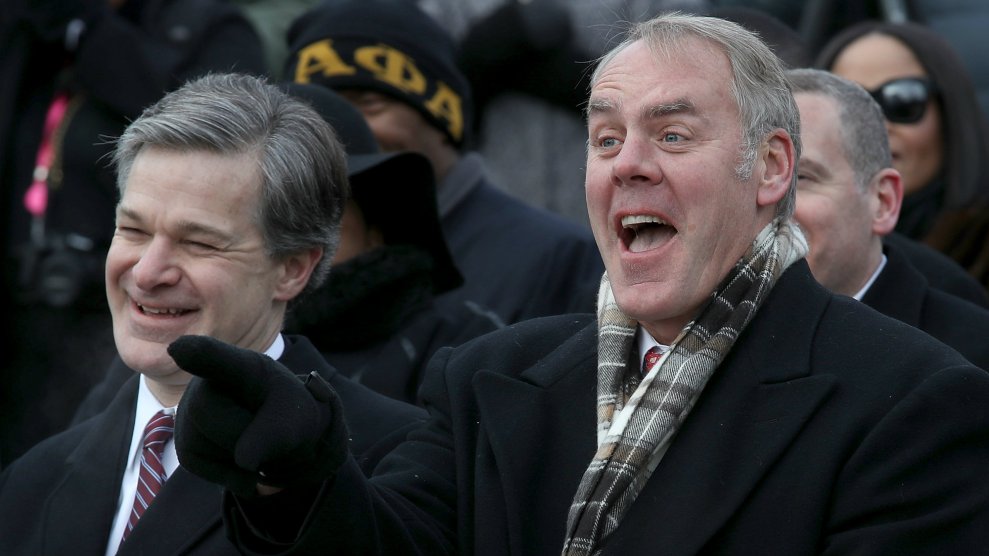 At a conservative event in Steamboat Springs, Colorado, on Friday, Interior Secretary Ryan Zinke pounced on the opportunity to blast his critics, including the “environmental terrorists” he blames for wildfires in the West. The left, he said, is “angry,” “intolerant” and “uninformed” when it comes to public lands and environmental issues―and they aren’t interested in debate, one of the things that has “made America great.”

On Sunday, Zinke traveled to fire-ravaged California, where he made it abundantly clear that the Trump administration has no interest in the scientific research showing climate change is contributing to the extreme fires raging across the West or that the effect on wildfires is expected to grow as climate change drives up global temperatures and fuels droughts.

“It doesn’t matter whether you believe or don’t believe in climate change,” he said during another interview this weekend while touring neighborhoods torched by the deadly Carr fire west of Redding, California.

“What is important,” he added, “is we manage our forests.”

I have no words that describe the loss and devastation experienced by the community. I’ve been to a lot of fires and this is just something else. We are here for you. 🙏🏻 #CarrFire pic.twitter.com/eRyZdTRwyF

To be fair, Zinke acknowledged that “there’s no doubt the [fire] season is getting longer, the temperatures are getting hotter,” as the Sacramento Bee reported. But he didn’t dwell on those factors and instead argued for more logging and thinning of forests while taking another swing at environmental groups that he says stand in the way of such efforts.

It’s true that the accumulation of fuel is among the factors that have contributed to increased fire activity, and California is taking additional steps to improve forest health. But a 2016 study found that human-caused climate change had doubled the amount of land that burned in Western forests over a 30-year period by significantly drying out vegetation.

The numbers paint a clear picture of the threat California is facing.

Thirteen of the state’s 20 most-destructive fires on record have occurred since 2003. Coming in at No. 6 is the Carr fire, which has burned more than 200,000 acres, destroyed 1,599 structures and killed seven people, including three firefighters. Additionally, 15 of the state’s 20 largest fires have occurred since 2002. The Mendocino Complex fire, which has burned nearly 300,000 acres north of Santa Rosa, surpassed last year’s Thomas fire as the largest wildfire in California’s history.

California is already way ahead of where it was at this time last year, both in terms of the number of fires fought and the acreage burned.

That a member of President Donald Trump‘s Cabinet would dismiss the link between climate change and wildfire is par for the course. What makes Zinke’s statements during his trip to California so astonishing is that they come two days after he stressed the importance of being informed and open-minded.

As HuffPost reported last week, the administration appears to be using the disaster in California as an opportunity to push partisan policy. While Zinke works the logging angle, Trump and Commerce Secretary Wilbur Ross have attempted to connect devastating California wildfires to a longstanding fight between farmers and environmentalists over water resources.

Last week, Ross issued a directive that prioritizes water for fighting wildland fires over protecting endangered species, without offering a shred of evidence to show that firefighters actually need it.

The move came just two days after California fire officials dismissed Trump‘s claims that the fires have been exacerbated by a water shortage resulting from “bad environmental laws.” As they see it, the problem is the one that Zinke and other administration officials refuse to acknowledge.

“It is our changing climate that is leading to more severe and destructive fires,” Scott McLean, deputy chief of the California Department of Forestry and Fire Protection, told HuffPost last week.

Zinke traveled to California on the taxpayer’s dime to learn about the wildfire threat and tour the damage. It would be a shame if he left without looking at the actual facts.