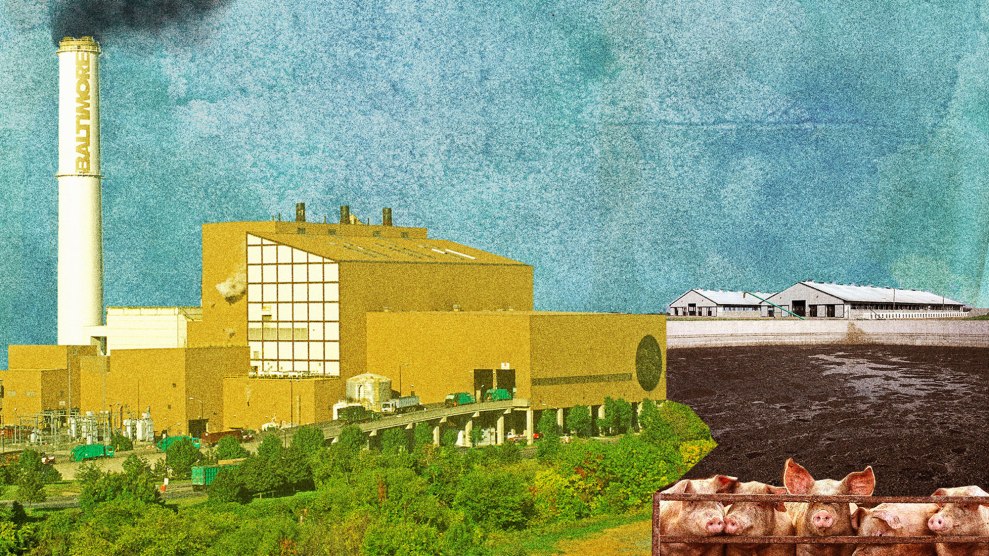 Drive down Interstate 95 through Baltimore and you can’t miss the Wheelabrator trash incinerator, its smokestack emblazoned with the city’s name. The Charm City’s single largest source of industrial air pollution churns out well over 600,000 metric tons of carbon dioxide annually.

In 2017, those emissions were equivalent to what’s given off by more than 130,000 cars driven for a year. It is also one of Maryland’s major sources of nitrogen oxides—a principal component of smog. One analysis estimates the facility’s air pollution kills an estimated 5.5 people per year.

James Alston is a resident of the South Baltimore neighborhood of Westport. He resides roughly five blocks from the incinerator in a home his family has lived in since 1967. From his front porch, the smokestack is clearly visible. On bad days, he says, a rancid, overpowering odor wafts over from the facility to his community. When he learned how much pollution comes from the Wheelabrator site—and its potential health impacts—he thought of neighbors who had died. Could they have lived longer lives if it weren’t for the facility?

“They’re here, and they pollute, and from what I gather, they don’t care,” Alston says. He wants the facility out of the majority-black community. “It’s environmental racial injustice as I see it,” he adds.

In the eyes of the state though, the energy Wheelabrator creates from burning as much as 2,250 tons of trash each day is considered renewable. Thus, the company gets subsidies—an estimated $3.4 million in 2015—from utility companies and ratepayers as a result of the state’s renewable energy policy.

In a statement to Grist, Wheelabrator says the facility “adheres and exceeds strict federal and state air regulations established by both the U.S. Environmental Protection Agency and the Maryland Department of the Environment.”

Trash incineration isn’t the only polluting industry that Maryland considers a renewable energy source. Poultry litter incineration and paper mill waste burning are also lumped in alongside wind and solar energy, according to the state’s plan.

Maryland’s not alone in ranking some surprising sources of energy as renewable. The state of Oregon set a goal that by 2040, 50 percent of the energy generated by large investor-owned utilities should be renewable—and that includes incentivizing energy from manure digesters and burning wood.

In 29 states plus the District of Columbia, policies like these that are termed “renewable portfolio standards”(RPS) set benchmarks that stipulate what percentage of the state’s energy should be generated from renewable sources. When most people think of “renewables,” they picture sources like solar and wind. But the nonprofit Food and Water Watch analyzed the 30 policies across the country and found that every one also included “dirty” sources such as mill residue, wood, waste incineration, and waste-methane burning. Some of these generation processes emit large amounts of carbon dioxide, and many release other pollutants.

“These states sort of fudge renewable by saying, ‘You know, there’s always going to be trash, so of course it’s renewable,’” says Liz Nussbaumer, Food and Water Watch senior researcher and co-author of the organization’s recent report. “It’s a regenerating source of energy. But as far as it being clean, that’s absolutely not the case.”

For right now, the definition of “renewable” is surprisingly subjective, experts say. “There’s no sort of industry standard definition,” says Galen Barbose, a research scientist at the Department of Energy’s Lawrence Berkeley National Laboratory (LBNL). “It’s kind of in the eye of the beholder, I guess.” As a result, a policy intended for environmental benefits doesn’t always quite achieve those goals.

Renewable portfolio standards started cropping up in the ’90s, Barbose says—and because states create their own policies, each is somewhat different. Some are guided by incentivizing job creation. Others seek to promote energy independence or slash emissions, explains Jeff Deyette, director of state policy and analysis for the Union of Concerned Scientists, a nonprofit that uses research to advocate for environmental issues.

In each of these standards, the state announces target amounts of energy—typically expressed as a percentage of the total energy provided by electricity suppliers—that must be generated from renewable sources, as well as dates for each of those targets to be met. Every state’s RPS policy is different, but many include less-than-clean sources that create pollution that can damage the environment and people’s health.

Maryland and many other states rank their renewable sources in tiers, with the top tier being the “more preferred” sources, Barbose says. Incineration is in the top tier of Maryland’s standards, and in 2015 made up about 9 percent of the tier-one credits used to fill the state’s requirement, according to a state Public Service Commission Report. “I’m not aware of any other states that allow municipal solid waste as a tier-one resource,” says Barbose.

In the majority of trash incineration plants, garbage is burned at high temperatures, heating water to create steam to power a turbine and provide electricity. Incinerators that burn only fossil fuel-derived products, such as plastics, generate less carbon dioxide than natural gas plants and roughly half that of coal-fired plants.

However, incinerators that also burn organic material (food waste, diaper contents, etc.) actually generate more carbon dioxide than coal does to produce the same amount of energy. Across the United States, organic material fuels about half the total electricity created by municipal solid waste incinerators, according to the Energy Information Association. (When asked what portion of waste Wheelabrator Baltimore burns is organic and what portion is fossil-fuel based, the company declined to answer.)

In addition, although waste incinerator emissions have decreased significantly since the 1990s, in response to Clean Air Act regulations, they still pump pollutants like mercury, particulate matter, and carbon monoxide into the air. Wheelabrator Baltimore, for example, emits lead, which is implicated in a host of health effects, including developmental delays in children, and methane, a more potent greenhouse gas than carbon dioxide. A 2006 EPA analysis found that in 2000, incinerators were the fourth-largest source of dioxins, highly toxic substances that the agency says can cause cancer.

For those reasons, not every state welcomes garbage burners: Waste-to-energy giant Covanta applied to New York state in 2011 to get incineration into the RPS. The state Department of Environmental Conservation reminded the company that it decided not to include incineration in the RPS when the state’s policy was first created in 2004 because a few years prior, New York trash incinerator facilities were found to release six times the amount of mercury as the average coal-fired power plant.

In the state of North Carolina, energy created from poultry and swine waste is also considered renewable. This can mean burning poultry droppings for energy and capturing methane from lagoons of pig excrement. Those sources are a small fraction of the portfolio, according to Sanya Carley, an associate public professor at Indiana University-Bloomington’s School of Public and Environmental Affairs. But, she says, “They do want the state to make sure that they develop that in conjunction with wind and solar.”