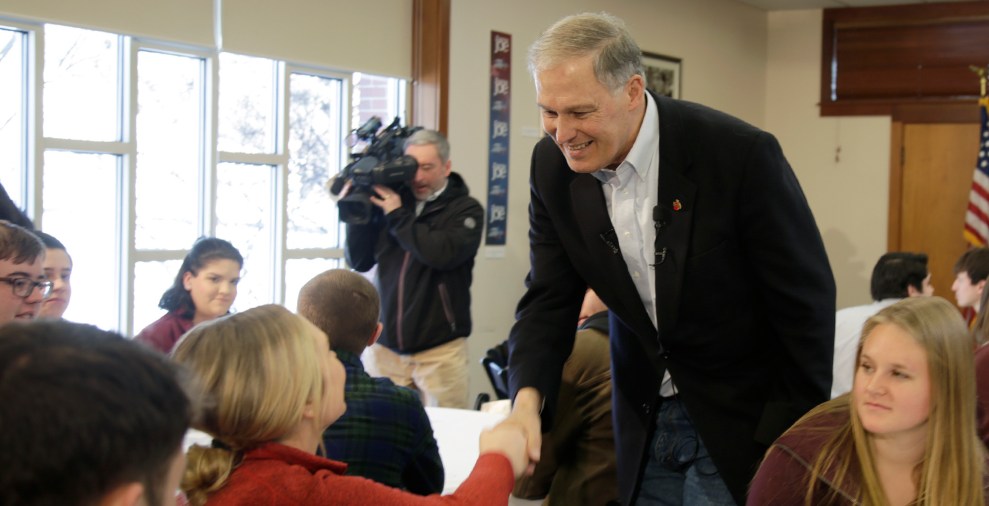 Washington Gov. Jay Inslee joined the Democratic primary frenzy on Friday, launching a campaign with climate change as its central focus, an issue that conventional political wisdom, pointing to the polling, dismisses as a lower priority for voters than health care and stagnating wages.

The race now has a candidate who says he “will make defeating climate change our nation’s No. 1 priority.”

“We have an opportunity to transform our economy and run on 100 percent clean energy that will bring millions of good-paying jobs to every community across America and create a more just future for everyone,” Inslee said in his campaign video announcement Friday. Later, in Seattle, with his wife, children, and the grandchildren he regularly calls his inspiration in the climate fight, Inslee will hold a press conference at a solar installation company.

Inslee plans to visit Iowa, Nevada, and California for a Climate Mission Tour, where he will echo the message he first began testing last month in two roundtables with college students in New Hampshire.

In more than two decades in politics, the congressman turned two-term governor has cultivated a reputation as a serious thinker on how to address climate change. A lifelong environmentalist, Inslee set out an early vision for a Green New Deal-type fight against climate change before the branding caught on. He co-wrote a book called Apollo’s Fire in 2007 about the transformative power of a clean energy economy. Under Inslee, Washington state has taken a lead with other states to fight the Trump administration’s climate denial, joining the US Climate Alliance of states that remain committed to the 2015 targets set in Paris.

But Inslee has waged and lost his share of political fights, including the nation’s first statewide carbon tax ballot initiative centered around environmental justice. Voters rejected the proposal last year after industry opponents raised more than $30 million against it. The Legislature, controlled by Democrats by a razor-thin margin, failed to pass a similar bill last year. This year, the Legislature, which picked up additional blue seats last cycle, is considering a new package of transportation and infrastructure investments in an effort to reverse the troubling trend from 2012 to 2015, during which Washington’s carbon emissions climbed 6 percent.

The 67-year-old Washington native is far from the only candidate to consider climate a top priority, especially as Democrats clamor to get on the Green New Deal bandwagon. But unlike most others, he has a lengthy track record of trying to raise the profile of the fight. Over a decade before the Green New Deal burst onto the scene, Inslee attempted to sound the alarm of a warming planet, comparing the need to mobilize resources to fight climate change to the Apollo Mission to the moon. As one of few governors in the race and the recent chair of the Democratic Governor’s Association, Inslee plans on showcasing his record of implementing programs, not just sponsoring messaging bills in the Senate.

“If there are three tiers, he’s in the third right now,” Democratic strategist Mary Ann Marsh says. “A lot of people don’t know him. A lot of people aren’t familiar with him. He’s certainly doing a lot of cable TV to try to get better-known.”

“It’s hard for people to personalize it in the same way people feel their health care bill or rent or job,” Julian Brave NoiseCat, a policy analyst for 350.org, says. “I’m really curious how someone like Gov. Inslee will message climate and the Green New Deal. How is he planning to take on this pretty significant communications challenge?”

During an interview with Mother Jones in Washington, DC, where he was attending the Democratic Governor’s Association meetings last weekend, Inslee said he was optimistic his message will resonate with younger voters, noting the calls he’s made with freshman Alexandria Ocasio-Cortez and meetings his staff has had with Sunrise Movement activists in recent weeks.

“I’ve never run on popularity,” Inslee said, pointing to positions he has taken throughout his career in politics, especially in Congress. “I voted against the Iraq War. I voted for the assault weapons ban in a red, small agricultural district. I voted for a lot of things that were right that happened not to be popular at the moment.”

Listen to reporter Ari Berman interview Gov. Jay Inslee about his playbook for forcefully taking on President Donald Trump, in court and in person, and what former President Barack Obama’s basketball game is really like, on this episode of the Mother Jones Podcast.