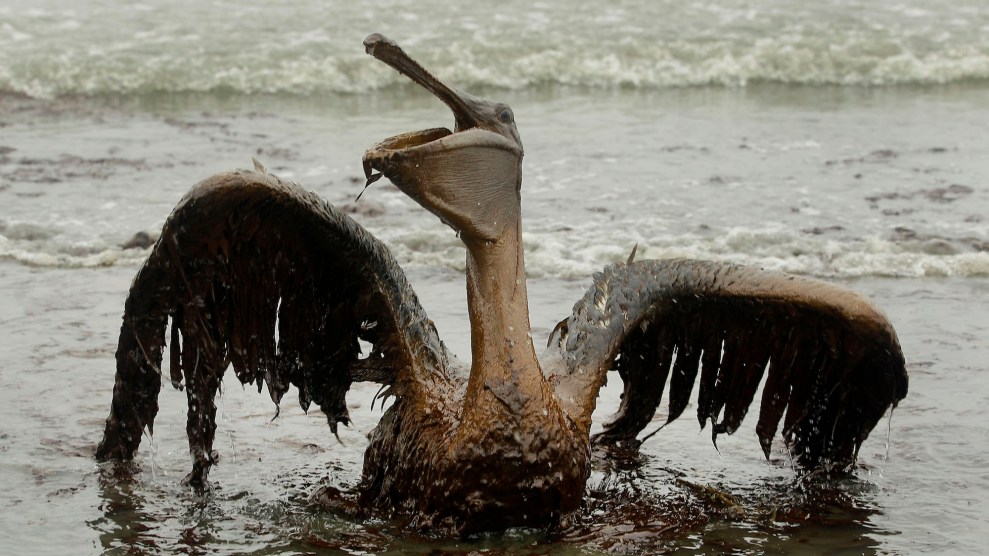 A brown pelican drenched in oil by the Deepwater Horizon spill in 2010.Charlie Riedel/AP

Nine years ago, BP’s Deepwater Horizon drilling rig exploded off the coast of Louisiana, causing the worst oil spill in US history. The disaster on April 20, 2010 killed 11 workers as the flaming rig sank into the Gulf of Mexico. It took nearly three months to stem the flow of oil from the ruptured undersea well. By then, four million barrels of crude had seeped into the surrounding water, endangering marine wildlife and throwing local ecosystems out of balance.

The cleanup effort in the aftermath of the explosion was expansive and expensive. At its peak, more than 47,000 people worked on the response effort in the summer of 2010. By 2018, BP estimated that the spill had cost the company nearly $65 billion in legal fees, settlements, and funds for clean-up and restoration.

Although much of the oil was recovered or dispersed in the ocean, the surrounding ecosystems still have not fully recovered. Some may never recover.

Donald Boesch, a professor of marine science at the University of Maryland Center for Environmental Science who was appointed to the National Commission on the BP Deepwater Horizon Oil Spill and Offshore Drilling under by President Barack Obama, said the spill’s most lasting effects have been in deep-water zones, wetlands, and in the the population of larger marine animals like turtles, whales, and dolphins with long lifespans.

While most of the spill’s acute effects—oil soaked birds, beaches slick with crude—have dissipated, Boesch says some contamination persists. “Areas in the deep water near the site of the blowout still have some level of contamination of oil in the sediment,” he says. “It just takes a long time, once that material is in the sediment, to degrade because of the lack of oxygen.”

That lingering pollution has consequences near the site of the spill, particularly on the delicate microbiomes that are the building blocks of ocean life. A 2018 study led by a microbial ecologist at the University of Southern Mississippi found that biodiversity had been reduced in areas that had been affected by the spill, compared with areas that had not been exposed to the oil.

A relatively small amount of the spilled oil washed onshore. But in fragile coastline areas in Louisiana and Mississippi, oil killed off the plants that had been holding the wetlands together. In 2016, scientists from the US Geological Survey published work showing how petroleum exposure from the BP spill increased the recession of the shoreline as vegetation died at the roots. “There are wetland areas that were oiled and died and they aren’t recovering and they just won’t recover,” Boesch says.

And for long-lived marine animal populations, the oil spill has been deadly. Up to 167,600 turtles from five endangered species were estimated to have been killed as a result of the spill, according to an assessment by the National Oceanic and Atmospheric Administration. The contamination contributed to the Gulf of Mexico’s largest and longest dolphin die-off, and research points to lasting reproductive issues among the region’s population.

The Obama administration heavily limited offshore drilling in the aftermath of the Deepwater Horizon explosion, but last year, the Trump administration began to undo those efforts. In January 2018, the administration opened nearly all US coastal waters to offshore drilling, a move environmental advocates criticized as a giveaway to the oil and gas industry. And in June 2018, President Donald Trump issued an executive order that undid protections put in place by Obama, handing more control of drilling safety to the states while making enhancing “America’s energy security” a top policy goal.

Additional changes to federal regulations would roll back protections put in place in the aftermath of the Deepwater Horizon disaster. Revisions to the Well Control Rule, implemented in 2016, would loosen third-party oversight of safety mechanisms like blowout preventers, which automatically seal leaking undersea wells. In the Deepwater Horizon explosion, a design flaw in its blowout preventer prevented it from working as intended.

The Bureau of Safety and Environmental Enforcement estimated that the changes to the Well Control Rule, proposed under the Trump administration, would result in $946 million in savings to the oil industry over a decade. But Boesch points out that number is a drop in the bucket compared to the 600 million barrels of oil produced by offshore drilling in the United States.

To relax the post-BP regulations, “is to forget the lessons that were learned,” he says. “I can see from an industry standpoint that you don’t want to pay it. But look at the damage that was done, not just to the environment but to the people on the Gulf Coast and to the industry itself. Why are we trying to save a nickel while potentially risking having to fork over another few billion dollars?”

Correction: An earlier version of this article misstated the name of the university where Donald Boesch is affiliated.