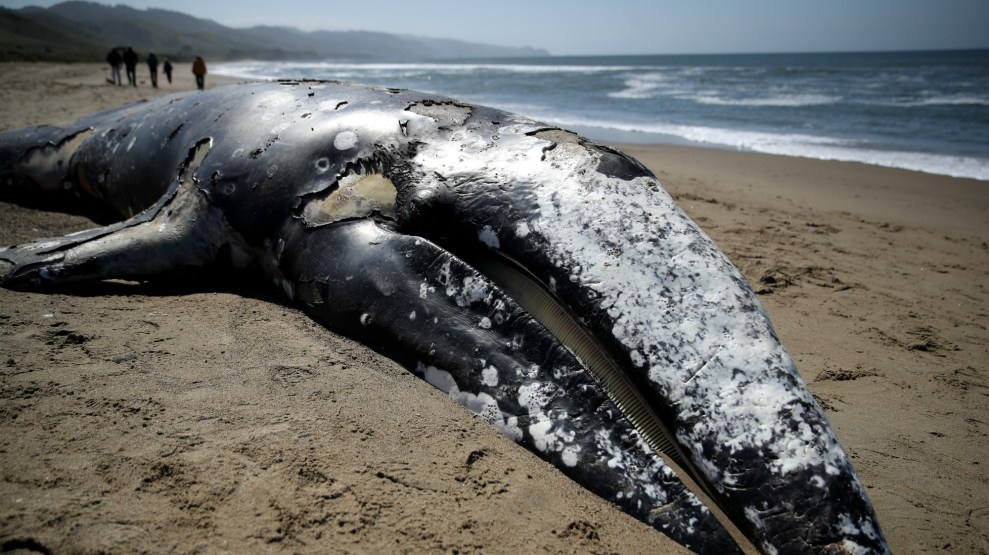 Local organizations have struggled to dispose of 70 dead gray whales that have washed up along America’s West Coast. Now, a federal agency is turning to private property owners for help.

The tragic die-off is the highest in 20 years. Scientists believe most of the massive animals are starving to death and speculate that it’s because food sources are vanishing in the dramatically warmer waters triggered by climate change.

Officials from the National Oceanic and Atmospheric Administration are asking landowners to volunteer space to simply allow the mammals to decompose over time.

Authorities are pitching it as a way to support the natural marine process and provide food for birds and other scavengers. But it can take months for the 40-ton carcasses to break down and the smell can be overwhelming.

A Washington couple is currently hosting the emaciated carcass of a 40-foot male gray whale on their waterfront property. The beast was towed earlier this month by marine stranding responders away from beachfront homes and to the space owned by Mario Rivera and Stefanie Worwag, a veterinarian that participated in the necropsy of the whale. The couple volunteers at the local Port Townsend Marine Science Center.

The smell is “not too bad,” Rivera told the NOAA in a story posted on its website. “How many opportunities do you get to watch something like this happen right out in front of you?”

So far 30 of the dead or dying whales have washed up on the coast of Washington state, with another 37 in California and three in Oregon.

NOAA has declared the deaths an “Unusual Mortality Event” as part of a process to focus more resources into a proper investigation. Officials expect many more whales to die in the coming months.

The whales that have washed up so far are considered to be just a fraction of the death toll, as many of the animals decompose at sea or end up on remote rock outcroppings or small islands.

Gray whales spend the summer in the northern Bering and Chukchi Seas, where they consume nearly a year’s worth of nourishment so they can migrate south to Mexico for the winter. Sea ice has been at or near record lows off Alaska, with rising temperatures likely impacting the population of amphipods crustaceans that are the whales’ primary source of food, according to NOAA.

The emaciated whales, now migrating north, are likely showing the impact of poor feeding last summer, according to officials.

Once common throughout the Northern Hemisphere, gray whales now only exist in the North Pacific Ocean. There are about 27,000 in the Eastern North Pacific population along the West Coast.