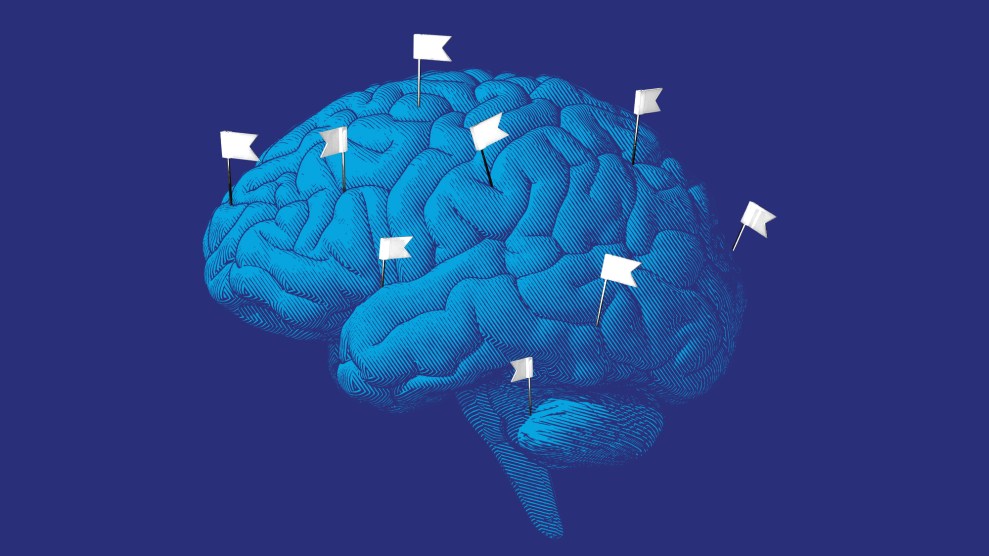 When I first met 11-year-old Baron, his nose was deep in an open package of Fruit Snacks. He was drawing long breaths, like a torturous meditation, in an attempt to generate enough drool to fill a pinky-sized vial. When it was clear the gummies weren’t doing the trick, he tried staring at laminated photos of yummy foods—fudgy brownies, juicy raspberries, gooey mozzarella sticks.

While he gazed and sniffed, a research assistant at a lab next door to Stanford University carefully trimmed a few hairs from the crown of his head. The hair would be tested for nicotine and other drug exposure; the saliva, once he generated it, would be sent to another lab for DNA analysis. The next few hours were a marathon of data collection: Baron worked on vocabulary tests and memory games on an iPad; submitted to an hourlong MRI scan to track his neural activity while he completed tasks involving impulsivity and rewards; and answered dozens of questions posed by friendly researchers about screen time, exercise, substance use, sexual activity, suicidal ideation, family conflicts, and more.

Baron is one of nearly 12,000 kids across the country participating in the Adolescent Brain Cognitive Development (ABCD) Study, the largest-ever longitudinal study of the maturing brain in the United States. If all goes according to plan, Baron and his peers will undergo an annual battery of genetic and psychological tests and biannual MRI scans for a decade, from roughly age 10 to 20. Each young subject will be evaluated at one of 21 research sites funded by the National Institutes of Health, from Yale University to SRI International, where Baron participates. They’ll also check in over the phone with RAs every few months, and occasionally wear Fitbits to track sleep and activity. Some participants have even donated baby teeth, which can provide information about exposure to various toxins dating back to their time in the womb.

Researchers expect this massive endeavor, receiving $30 million in federal funding per year, will transform our understanding of brain development. Neuroscientists are positively giddy about ABCD, and for good reason: It is larger and more racially and socioeconomically diverse than any comparable study to date.

“We’re going to be working with this dataset for decades,” said one scientist. “I think it’s going to be an absolute boon for sciences.”

“We’re going to be working with this dataset for decades,” said Jennifer Pfeifer, a University of Oregon developmental neuroscientist who is not involved with the study. “I think it’s going to be an absolute boon for sciences.”

The kids were recruited at a critical age: Most 10-year-olds are old enough to have the patience to sit through hours of tests, but young enough that they haven’t experienced the many critical neurological changes that come with the second decade of life. Over the course of the study, which is now in its second year, the cohort will have all sorts of experiences outside the lab that could affect their neurological development. They’ll be exposed to varying levels of pollution, screen time, sleep, and physical and emotional trauma. Some will become addicted to drugs. Some will suffer concussions. Some will develop the mental health issues that tend to emerge during adolescence, like depression and schizophrenia.

ABCD is practicing the increasingly popular “open science” philosophy: Its reams of data will not belong to the researchers but will be anonymized and released to the scientific community each year. “A lot of the other studies are only publicly released years and years after it’s done,” said Deanna Barch, chair of the brain science and psychology department at Washington University in St. Louis, an ABCD site. “The taxpayers are spending a ton of money to fund this study. Making it available is the only way to ensure as many different clever, creative minds can look at the data as possible.”

A number of studies have already come out based on the first year of ABCD data. Though it’s too early to draw any conclusions about cause and effect, researchers have made some striking observations. Barch’s team found that boys involved in sports tended to exhibit fewer symptoms of depression. (This didn’t hold for girls, however.) Another study found that living in poorer neighborhoods was associated with smaller amygdala and hippocampal volume, measures associated with slower cognitive processing. One paper looked at rates of suicidal ideation among kids who identify as gay or bisexual; another paper examined the prevalence of eating disorders.

The idea for ABCD originated in 2014, when researchers at the National Institute on Drug Abuse (NIDA), part of the NIH, were being pressed by parents, pediatricians, and policymakers for information about the neurological effects of marijuana and e-cigarettes. There were lots of studies comparing brain scans of cannabis users to nonusers, but such studies run into a chicken and egg problem: Does something about certain kids’ brains predispose them to drug use, or does drug use lead to differences in their brains? To answer the question, “what you need to do is recruit kids before they become addicted to drugs,” said Silvia Bunge, a University of California-Berkeley neuroscientist who is not part of the ABCD study. “Since such a small proportion of kids end up that way, you need to recruit a large sample.”

The chicken and egg problem plagues much of our understanding of brain development. When someone has a traumatic brain injury, doctors have no way of knowing if a brain scan is showing results of a concussion, or if the brain looked like that already. One of the aspirations of ABCD, said study director Gaya Dowling, is “to have something akin to height and weight growth charts that pediatricians use for the brain.”

As NIDA floated the idea of a large long-term study to examine the neurological effects of drug use, other NIH institutes became interested. “There’ll be a sub-group that drinks a lot of alcohol at, heaven forbid, 14 years old,” said George Koob, director of the National Institute of Alcohol Abuse and Alcoholism and an ABCD co-sponsor. “What does that subgroup look like? Is there any change in how the brain develops? Does it last, or does it recover?”

“What is the normal trajectory of healthy human neurodevelopment—and is there even a single trajectory?”

By last fall, when recruitment of 9- and 10-year-olds was complete, the study had morphed to include 10 NIH institutes, 40 principal investigators, and hundreds of research staffers across the country. The focus is still substance use—NIDA covers more than half of the study cost—but the fundamental question the project sought to answer had broadened. As NIDA director Nora Volkow put it, “What is the normal trajectory of healthy human neurodevelopment—and is there even a single trajectory?”

Baron’s mom, Jean, first heard about ABCD in 2017 through a recruitment flier sent to the parents of third and fourth graders in San Jose, California. It piqued her interest: She liked the idea of contributing to science. She liked that the study was prioritizing diversity—and that her child, a Chinese American from a middle class family, could participate. The financial incentive—about $300 for each annual battery of tests—didn’t hurt, either.

While previous neuroimaging studies have been limited to mostly white, well-to-do participants, the makeup of ABCD’s 12,000 participants roughly mirrors the US population: Fifteen percent of participants are black and 21 percent are Hispanic. Forty percent come from families in which neither parent earned a bachelor’s degree—a lower proportion than the general population, but higher than seen in most studies. “We tried to get people to participate that normally are very difficult to recruit and are therefore often not recruited” in longitudinal studies, said Martin Paulus, scientific director of the Laureate Institute for Brain Research, an ABCD study site in Tulsa, Oklahoma.

A 10-year study can be a hard sell to parents—particularly those who are aware of the thorny track record of government-funded studies involving minorities, such as the infamous Tuskegee experiment. “Many US communities have had very difficult intersections with research, with devastating cultural, physical, and health implications,” acknowledged ABCD researchers in a recent paper.

There’s also the question of how much privacy kids should have from parents. The study will keep all information collected confidential unless it poses an immediate health threat: Researchers won’t tell a parent if their kid admits to smoking weed or drinking, but they will notify a parent if a brain scan suggests the child has a tumor. An ABCD ethics group will provide guidance if and when the soon-to-be teenagers use more dangerous drugs like heroin and engage in other high-risk behavior.

Baron likes coming to SRI, where he gets to play games in between tests and picks out toys from a “treasure chest.” He leaves each visit with a printout of what his brain looks like in the MRI. It feels a bit like a daylong summer brain camp. But as Baron gets older, it will take a lot more than trinkets to make sure he keeps coming back. The study’s designers expect about 10 percent of the participants to quit over the coming years. Paradoxically, the kids who develop conditions that scientists are itching to understand—particularly substance use disorders or mental illnesses—can be the most likely to drop out of longitudinal studies. The trickiest participants to retain are those with severe depression who “don’t feel they want to do anything,” said Paulus. “We’re going to have to make sure we know where they live, knock on their doors, make sure we get them to come.”

The study’s success depends on a lot of big ifs: If the researchers can keep kids coming back through adolescence, if those teenagers engage in behaviors that fundamentally change their brains, if the scans pick up those changes, and if researchers across the country can keep collaborating for the next eight years—then, says Koob, the study will be a “gold mine.”