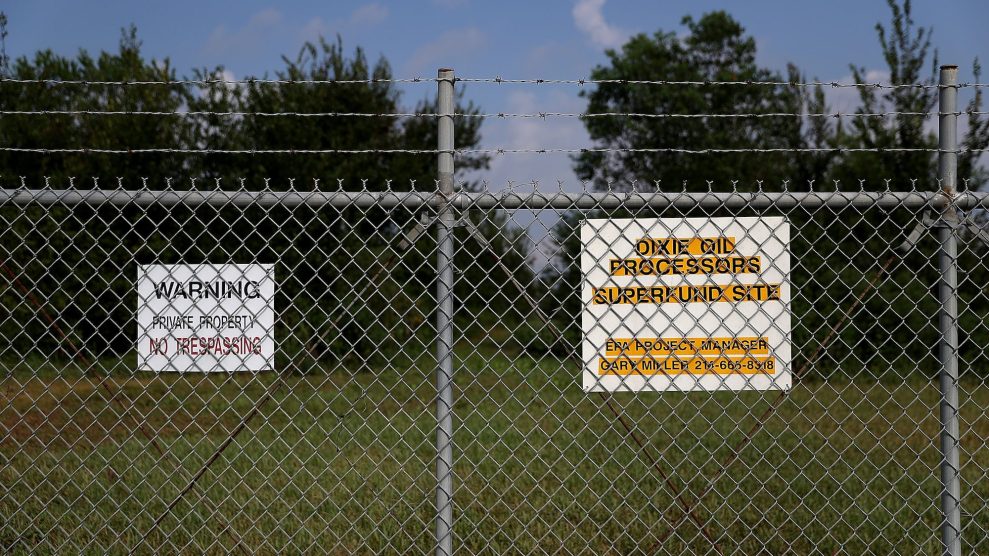 Two years ago, Congress asked the Government Accountability Office (GAO) to determine how prepared the Environmental Protection Agency (EPA) was to address the threat climate change poses to Superfund sites—spaces that store hazardous materials, like coal ash ponds or decommissioned mining sites that the EPA has identified for eventual clean up. The GAO findings just have been made public in a new report, EPA Should Take Additional Actions to Manage Risks from Climate Change. And they’re troubling. The majority of Superfund sites identified are in regions threatened by extreme climate events, and the EPA largely ignored GAO’s recommendations to address those dangers.

The report comes as the result of a request submitted by a group of elected officials, including current presidential candidates Kamala Harris (D-Calif.), Cory Booker (D- N.J.), Bernie Sanders (I-Vt.), and former 2020 candidate Kirsten Gillibrand (D-N.Y.). The GAO found that of more than 1,500 Superfund sites they examined, scattered across all 50 states and four territories, more than 900 are threatened by climate cahnge. As we reported when Hurricane Dorian threatened some sites last summer:

There are thousands of contaminated sites in the United States, the Environmental Protection Agency says on its website, “due to hazardous waste being dumped, left out in the open, or otherwise improperly managed.” And as Hurricane Dorian made landfall over the coast of North Carolina Friday and dropped heavy rainfall in the area, scientists worry about a repetition of what happened with Hurricane Harvey: Chemicals being swept up in stormwaters and spreading into nearby communities.

The increasing number and severity of hurricanes are only one potential problem facing these sites. “What we found is that about sixty percent of the Superfund sites are at some risk of one of these climate change impacts,” says Alfredo Gómez, director of Natural Resources and Environment at GAO who was in charge of the report. “The question is then, ‘How well-prepared is EPA to safeguard these sites, knowing that these risks are out there?’” As the GAO reports, the answer seems to be  not very.

GAO made four recommendations to EPA, suggesting that the agency define how its mission aligns with “actions to manage risks to human health and the environment from the potential impacts of climate change effects” at Superfund sites, and create guidelines and offer help for site managers asses climate risks and responses. It also recommended that EPA update its Superfund site map because, Gomez explained, GAO had to work with outdated mapping information, which does not take into account the fact that Superfund sites can grow and shift over time. “GAO continues to believe that all four [recommendations] are warranted,” the report reads.

In the end, EPA rejected all of the recommendations, except to update its maps, stating that “existing processes and resources adequately” address the issues at hand. Research scientist Jacob Carter at the Union of Concerned Scientists says most of the background work required to satisfy those recommendations—if the EPA chose to accept them—already had been accomplished by the previous EPA administration. “[Office of Solid Waste and Emergency Response] identified different ways to adapt the Superfund sites to the impacts of climate change,” he says. “The groundwork has been done.” Carter acknowledges that the data would need updating, it’s now five years old, but that the resources necessary for that are negligible in comparison to those required for the previous work required to dig up the findings in the first place.

The consequences of inaction can be serious. Carter once described the sites as containing “the most dangerous chemicals known to mankind.” In the case of a flood “you can imagine those materials being picked up by the flood and carried outside the site,” he says, adding that during a wildfire, hazardous materials could burn into the air, infiltrating any community in the wind-flow’s direction.

These are not hypothetical scenarios, either. The GAO outlines situations in which Superfund sites have been overwhelmed by extreme weather, with subsequent serious consequences. One example is a waste pit on Texas’ San Jacinto River, a 60-year old, 40-acre site housing hazardous bleach by-products from a paper mill. In 2010, EPA required the site’s owners to install a “temporary armored cap” atop the waste. Seven years later, the cap failed under the torrent of Hurricane Harvey, and spilled the materials into the surrounding waters. According to the report, “EPA detected high levels of [hazardous materials]” in the contaminated area. In that case, it’s difficult to say whether the overhaul GAO says is missing would have led to a different outcome. But the report makes one thing certain. “In some cases,” Gómez says. “The EPA has fallen short.”