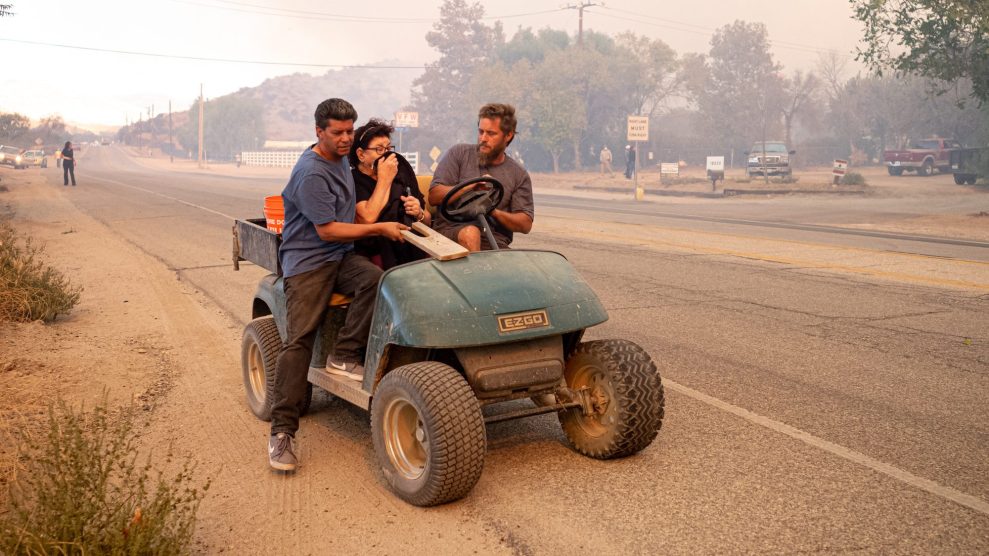 On the evening of October 23, in the middle of the kind of dry, windy night that has become more frequent and more terrifying in recent California autumns, a fire began outside the small unincorporated Northern California town of Geyserville. Over the next two days, as winds reached hurricane-like strength, they carried the fire south, burning some 75,000 acres and threatening some 90,000 structures as of Wednesday afternoon. So on Sunday, the sheriff of Sonoma County did something unprecedented: He ordered some 200,000 residents out of the area, as far west as the Pacific Ocean, marking it the largest wildfire-related mandatory evacuation order that anyone in his office could remember.

The sheriff, Mark Essick, knew some people would be angry about his decision, which no doubt disrupted lives and cost the local economy. “I can understand why someone in [the coastal town of] Bodega Bay is saying, ‘C’mon. What are you guys doing?’ I don’t take these decisions lightly,” he told the Santa Rosa Press-Democrat. But Essick was thinking of the Tubbs Fire, which killed 22 people in the county just two years ago, and of the Camp Fire, which ripped through the 20,000-person town of Paradise last year and killed 83 people just to Sonoma’s east. In Paradise, authorities reportedly didn’t order residents out until the fire had reached the town, where only one road led out of harm’s way.

That’s progress, says Thomas Cova, who studies wildfire evacuations at the University of Utah. “The first thing I think is, ‘OK, no fatalities!’ I actually feel a little bit better when I see that the headlines have to do with the number of people who left, because that means everything went well.”

Ordering evacuations in the face of wildfire is a mix of art and science, in part because officials have only about two decades’ worth of research to rely on. Historically, perfecting evacuations for hurricanes has received a lot more attention, which makes practical sense: They tend to affect millions, not thousands.

But hurricanes can be very different from wildfires. Officials can have days to discuss and implement plans to get people out of the way of large storms, and to communicate those plans through social media or the local news. Even with new early warning systems, fires can develop much more quickly. Residents might only have hours—or less—between a warning and flames reaching their homes.

Since the late 1990’s, more deadly wildfires have swept the western US, due in part to climate change, in part to forest management practices, in part to a struggling utility company, and in part to development along the wildland-urban interface—meaning more people live in fire-prone places. “It’s been really stark raving mad, a real out-of-control madhouse,” says Cova, as he runs down the list of destructive fires.

Those fires have complicated everyone’s understanding of how residents get out of the way of fires—and whether they choose to leave at all. People don’t always evacuate the way officials think they will. One paper published last year, for example, shows that decisions to evacuate are driven by how people feel about different kinds of risk. (Are you someone who generally takes risks—who might skip the seatbelt behind the wheel, or take a skydiving class? You’re slightly more likely to stay after a mandatory evacuation order and “defend” your home. Are you the sort of person who takes financial risks, a literal horse gambler? You’re a bit less likely to hang around during a mandatory evacuation.) It also suggests that a lot of folks go with the “wait-and-see” approach, even in the face of a “mandatory evacuation” order. Can they see or smell the flames? What are their neighbors doing? And once they decide to go, how quickly can they get out?

“I actually feel a little bit better when I see that the headlines have to do with the number of people who left, because that means everything went well.” -Thomas Cova, University of Utah

In the past, fears of mass panic have convinced local officials to skip Amber-like alerts, even where the technology exists. (During 2017 Tubbs Fire, authorities decided not to send to send an alert because they worried an alarm would hamper their rescue efforts.) But years of research suggests that disaster-induced panic is mostly a myth. In fact, social scientists observe more generous behavior—checking on neighbors to make sure they have a way out of town, for example—than anti-social behavior like trampling and looting.

That doesn’t mean wildfire evacuations are always straightforward. Checking on neighbors can take time, and so can making a stop to pick up a family member, a kid, or some food, the kind of behavior that’s been observed in hurricane evacuations. Evacuations are also shaped by local transportation options—whether residents have cars, and how many roads lead to safety.

In theory, these sorts of insights into human behavior should be applied by transportation planners, but that doesn’t always happen. “If you follow the transportation engineering approach, you would see some common assumptions made in developing an evacuation plan: that everyone will evacuate if they receive a mandatory order, and when they do, they’ll take the shortest route,” says Micah Brachman, a geographer who lectures at the University of Maryland and has worked with city planners and emergency management officials on evacuations. But “the routes people take to evacuate are pretty varied, so it’s not a good assumption to say that everyone knows the fastest way to get out.”

Even when engineers talk to emergency management officials, there are times when there’s only one road out. Gridlock happens. (Last weekend, jams snaked out of the towns of Windsor and Healdsburg after the evacuation order; no one was hurt.) For that reason, more emergency management officials have been thinking about an alternative to evacuations: staying home. Or at least close to home. During the Camp Fire, as the flames bore down, some in Paradise sought shelter in a sturdy, steel-and-concrete church—and survived. A more formalized policy, adopted from the Australian approach to wildfire, would see towns and cities identify and even build “fire bunkers,” places where they could concentrate people and fire-fighting resources without demanding everyone flee.

Some of the officials looking at the “shelter in place” option see it as a last resort; others, especially those living in towns with limited transportation options, see it as a smart and viable way to make sure residents survive disaster. As the American West’s now nearly year-round fire season continues, surviving may take all the creativity emergency managers can muster.