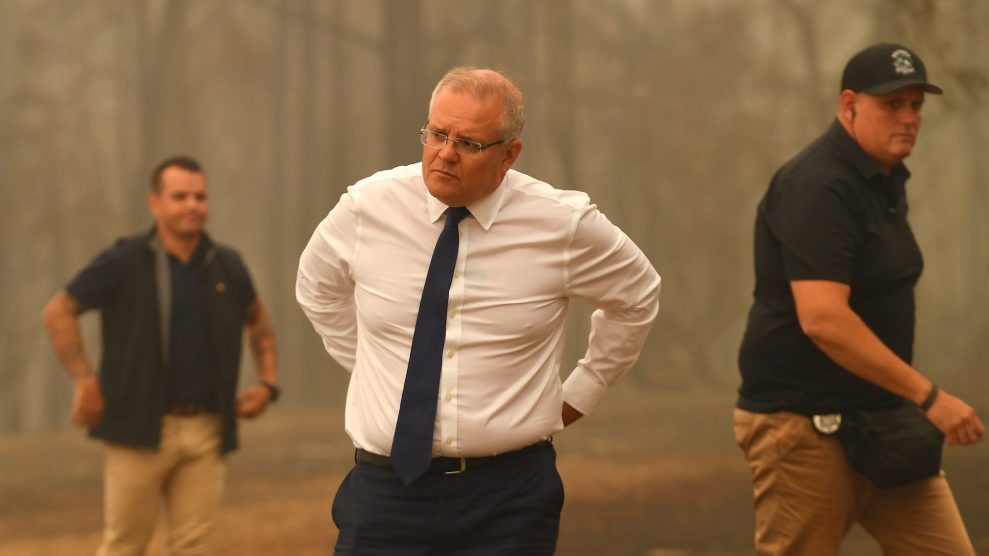 In August, 2018, when Scott Morrison became Australia’s 6th prime minister in 10 years, he presented himself as a responsible steward poised to bring continuity after a decade of leadership hiccups. To emphasize his willingness to take on the country’s most pressing issues, he evoked Bono: “When the history books are written, our age will be remembered for … what we did—or did not do to put the fire out.” Now, with the country in flames, those words seem painfully prophetic—and incriminating.

In the midst of the worst national crisis in recent memory—colossal wildfires that have swallowed a combined area the size of West Virginia, killed 28 people and countless animals, destroyed irreplaceable ecosystems, and prompted tens of thousands of evacuations—Morrison has finally acknowledged some responsibility for mishandling the crisis. Morrison’s critics suggest that the late and lackluster financial relief he offered and his reluctance to name climate change as a cause contributed to the appearance of the fires and their spreading at an astonishing speed, in some cases moving up to 55 miles an hour. Plus, even though experts have established a clear link between the extent and severity of the fires and climate change, the Morrison government took four months to fully acknowledge the connection— and even then, critics called it too little too late. Its allocation of  $1.4 billion USD in funding for damage relief has been described as a mere “drop in the bucket” in response to the fires’ epic proportions.

“When the history books are written, our age will be remembered for … what we did—or did not do to put the fire out.”

Morrison’s tanking poll numbers illustrate that many Australians agree. According to a recent Guardian survey, only 32 percent of the country approves of Morrison’s response to the brushfires while 52 percent disapprove of his overall performance. If that trend continues, Morrison could be just the latest Aussie leader condemned to political paralysis and public ire over the issue of climate policy, which has hung over Australia’s politicians like a dark storm cloud since at least 2006, and it has been instrumental in the downfall of multiple political leaders—a fascinating continuation of the “climate change as political kryptonite” narrative that has dominated Australian politics for years.

But there is plenty of blame to go around, especially since the Australian government has been accused of ignoring the warning signs of catastrophe long before the first flames. The problem goes back successive governments. Here are five opportunities missed by Morrison and his conservative coalition government, which may not have prevented the fires, but which almost certainly made them worse:

The epic proportions of the Australian fires this season have long been predicted by experts who have kept a close eye on climate impacts. In 2007, a report from the Intergovernmental Panel on Climate Change, a sub-organization of the United Nations that tracks climate change impact, reads like a prophesy now fulfilled: “An increase in fire danger in Australia is likely to be associated with a reduced interval between fires, increased fire intensity, a decrease in fire extinguishments and faster fire spread,” the report reads. “In south-east Australia”—where the fires are most devastating—”the frequency of very high and extreme fire danger days is likely to rise 4-25 percent by 2020.” The report puts the onus on the Australian government: “Differences in political commitment, lack of strong and clear guidelines from government…are major constraints.” Initially, Australia appeared to respond. In 2008, it established research facilities to study climate change adaption. Then, in 2017, Morrison, who was then the country’s treasurer, gutted program funding to a fraction of what it was.

Ditching the Kyoto Credits loophole at the Madrid Accords

During the Madrid climate change conference last December, Australia doubled down on a plan to achieve its Paris Accord 2030 goal—an emissions reduction of 26 percent below 2005 level—by carrying over credits from a prior climate agreement, the Kyoto protocol. Using the credits, which would permit the release of more emissions than 16 neighboring countries combined, would allow Australia to reduce its climate goals by about half. Critics tied the country’s inertia to its economic reliance on coal, an industry the Morrison government actively supports, but one that contributes massively to the country’s carbon emissions. On the international stage, other conference attendees were quick to point out Australia’s pariah status as the only country relying on the credits. Thirty-two countries even updated emissions goal rules to close the loophole, a clear message to Morrison. Scientific consensus suggests that climate change, propelled by fossil fuels, leads to more severe wildfires. By prioritizing the fossil fuel industry over a sustainable future, the Australian government added to the ingredients for longer, drier fire seasons. During the conference, former French environment minister Laurence Tubiana told the Financial Times that Australia’s use of the credits was “just cheating. Australia was willing…to destroy the whole system.”

In March 2019, 300 scientists signed an open letter to the federal and local governments across Australia, requesting that they strengthen regulations on land clearing, citing bush fires as a potential consequences of relaxed rules. New South Wales, where fires have been the most damaging, loosened controls on land clearing in 2017 by repealing a 2003 law that dictated how landowners could manage their vegetation. The letter’s authors suggest that land-clearing could contribute to lengthier droughts and carbon emissions, both combustors of bushfires, writing, “Large-scale clearing of woody native vegetation contributes to increased fire risk by exacerbating climate change through carbon emissions and increasing the severity and duration of droughts through changes in local and regional climates.” According to Deakin University professor Don Driscoll, a signer of the petition, both cleared landscapes and natural ecosystems are susceptible to bushfires. He stopped short of directly connecting the severity of this fire season with land clearing, but said the increase of the practice creates an environment more prone to fires. “Clearing native vegetation has other disadvantages,” he says. “Including loss of biodiversity and creation of a dryer climate.”

For the first three months of the bushfires, emergency response was largely left in the hands of the state governments, as is typical of the country’s previous handling of wildfire seasons. But in December, NSW firefighters made a direct appeal to local and federal officials for help, with the head of the volunteer fire fighting association characterizing the fires as “out of control.” Nearly two weeks later, with the even more intense and destructive flames, Morrison indicated that the federal government would step in, by deploying the country’s military, the Australian Defense Forces, to assist in emergency response. Unfortunately, nobody told the head of NSW firefighting efforts, Rural Fire Services commissioner Shane Fitzsimmons, who didn’t learn of the 3000-troop deployment until he saw it in the media. Asked about his feelings on the botched coordination, Fitzsimmons said he was “disappointed.” In a subsequent press conference, Fitzsimmons said,  “It took us some time to understand what the announcement was, what it meant, and how it was expected to be integrated.”

When the Australian fire season took off in September, advocates from the emergency responder community were already five months into a largely unsuccessful campaign to persuade the government to take seriously the additional burden climate change piles on bush fires. Since April, an organization of former emergency responders called Emergency Leaders for Climate Action Group, sought to convince the government—among other measures—to beef up its reserves of firefighting airplanes. In a September letter to Morrison from Greg Mullins, a former New South Wales fire and rescue commissioner and ELCAG member, again asked for an opportunity to make the case before government officials for the commitment of resources. Mullins described himself as “deeply concerned that we are not adequately prepared, that our brave emergency services personnel and communications are in increasingly grave danger.” Finally, after three months of continuous flames, the federal government relented, designating $7.5 million USD to lease four fire-fighting airplanes. In an interview with the Australian Broadcasting Corporation, Mullins is reported to have said that the funding “sat there for 18 months without any action.”