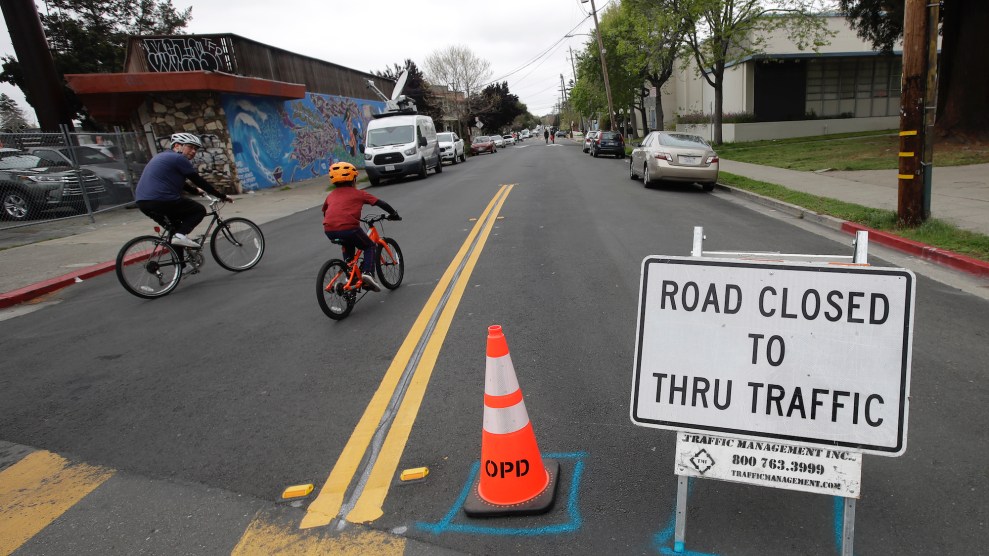 The view of 42nd Street in Oakland on Saturday. AP Photo/Jeff Chiu

Oakland, California, on Saturday started to phase in what it is calling a “slow streets” initiative, to give residents “more room to spread out safely.” The city’s mayor, Libby Schaaf, ultimately plans on closing 74 miles, or 10 percent, of its streets to cars, creating more space for pedestrians, joggers, and cyclists.

According to data from the National Association of City Transportation Officials, a coalition of departments of transportation throughout the country, Oakland’s initiative is the first large-scale closure of city streets during the coronavirus outbreak.

This is a dramatic departure from the unstated commandments of US urban planning and governance: make things harder for pedestrians and never, ever threaten the hegemony of car culture. There’s no question why it had to happen; the tougher question is whether it’ll happen more often now.

The conditions certainly are ripe for opening up the roads to foot traffic. Amid the pandemic, streets have emptied as vehicle traffic has dropped off a cliff. Smartphone location data from March, compiled by StreetLight Data, shows that traffic has dropped off 83 percent in San Francisco, 70 percent Los Angeles, 67 in New York and Chicago, and 77 percent in Washington, D.C. (In a handful of rural areas, driving is actually up, according to StreetLight.) Around the world, cities like Delhi have had a dramatic improvement in air quality.

Meanwhile, the sidewalks are as difficult to navigate as they ever have been, with pedestrians and runners fighting over narrow real estate to try to maintain a 6-foot-minimum radius. Some cities like New York and Washington, DC, have closed some parks and popular trails to pedestrians, to avoid crowded trails that might pose a risk for transmission.

The argument against opening up the streets is that it might make them more inviting to people who are otherwise being urged to stay indoors. In DC, Mayor Muriel Bowser rejected a call to open select streets and add temporary bike lanes along certain routes. “I don’t want to send the message to people to go out and have a festival,” she said.

Oakland is struggling with the same questions, but, Schaaf said, “We are taking this opportunity to try some new things.” Streets and sidewalks constitute 20–30 percent of the city’s land, Alex McBride, Oakland’s chief resilience officer, told the San Jose Mercury News. “We’ve decided to take advantage of that resource,” McBride said, adding that the city was “thoughtful and strategic” about the distribution of the closures.

Reclaiming streets from cars has been a hot idea in urban planning for a few years now. Barcelona rolled out an initiative to cut back on congestion with 500 “superblocks,” Vox’s David Roberts reported last year. San Francisco has gone mostly car-free on its busy Market Street, and New York recently shut out cars on 14th Street in Manhattan.

The open-streets efforts in America are moving against a powerful cultural current with a powerful lobbying arm, but the present crisis has ushered into some cities a cautious New Urbanism. By CityLab‘s Laura Bliss count, at least seven US and Canadian cities, including Portland, Minneapolis, and Calgary, have moved to selectively limit vehicles. In all, two dozen US cities have now passed or considered at least limited measures to close some streets to cars during the outbreak, according to data compiled by the NACTO.

Jacqueline Klopp, co-director of Columbia University’s Center for Sustainable Urban Development, says reclaiming streets for pedestrians and bikes is a solution worth considering, not just for the pandemic but permanently.

“Many [urban] planners focusing on healthy cities and reducing carbon have been advocating for a long time for proper, segregated bike lanes, and more space given back to pedestrians,” she says. When cars came into cities, she added, “we reallocated space in a socially unjust way, away from children and people who would like to walk and would like to ride bikes.”

There are no guarantees that the pandemic will indeed lead to more car-free streets in the longterm. Urban planners like Klopp are just as worried about a backlash to sustainable policies that encourage urban density but do not exactly fit a pandemic playbook. New York City’s outbreak has made cities that are dense by design another scapegoat in the pandemic, but Klopp maintains the density isn’t the problem when widespread testing and contact tracing has helped to control the outbreak in other parts of the world.

The reality is that there is no exact playbook that balances people’s need to move freely against immediate public health imperatives against longer-term sustainability concerns. But Oakland offers an example of a city at least rethinking the balance between pedestrians and cars going forward. And for now there are a lot of people seeing in vivid relief the connections between our well-being and the margin of public space allotted to us.