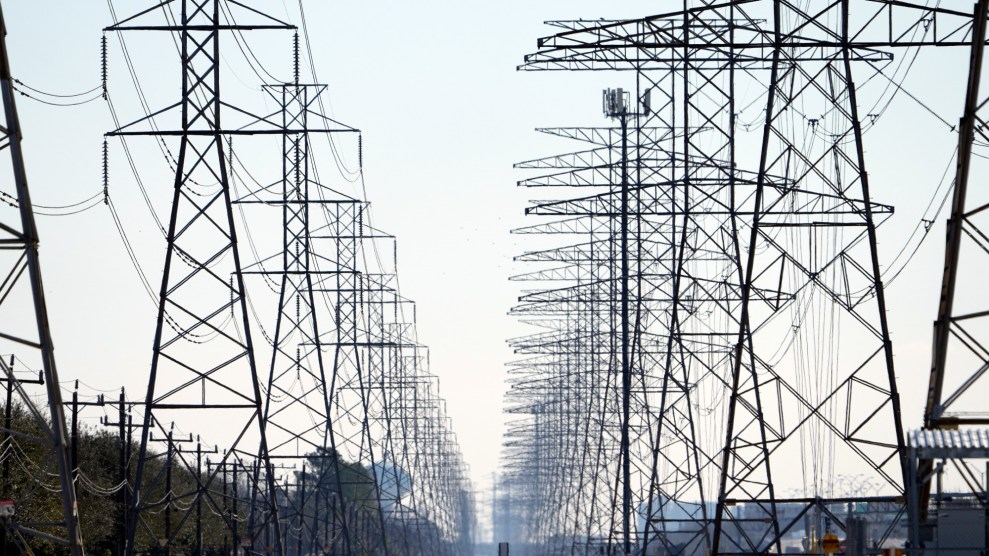 Last week, during a historic and catastrophic winter storm that brought snow and ice to Texas, the state’s independent and unregulated power grid collapsed. At the height of the storm, more than 4 million people were without electricity and in the ensuing days water supply issues left 14 million people without potable water. As pipes froze and burst damaging homes and businesses, the food supply also took a hit with stockpiles spoiling in warm refrigerators and delivery trucks unable to deliver much-needed products to the grocery stores.

As the devastation unfolded, the unbridled blame game began. Of course, it was all about politics. In a desperate move, the GOP falsely tried to blame the mess in Texas on the Green New Deal—which only exists conceptually, not in reality—and renewable energy. In reality, it was mostly the fault of Texas’ Republicans’ love affair with of natural gas and free market capitalism, which leads them always to prioritize profit over people. It didn’t take long before they became the prime targets for rage and ridicule, even as the power was gradually restored. But despite the Republicans’ horrific record on ignoring climate change, despoiling the environment, and favoring short term profits for industries that support them over long-term public health, safety, and environmental stewardship, it’s not just states run by the GOP that need to be worried about climate calamities.

Climate-fueled infrastructure disasters like the one still unfolding in Texas are coming for us all. In the last year alone, the United States has seen some of its costliest and deadliest climate change disasters in history. They include the devastating wildfires in the West that turned skies a deep, eerie orange and killed 33 people, and the record-breaking Atlantic storm year that left a trail of destruction in the Gulf Coast. And many of those catastrophes took place in reliably Democratic states like Oregon and California. Focusing solely on Republican-led states allows us to ignore the truth: Much like a deadly pandemic that’s killed half a million people, climate change chaos doesn’t care about voter registration or the arbitrary lines drawn by colonizers hundreds of years ago.

Much like a deadly pandemic that’s killed half a million people, climate change chaos doesn’t care about voter registration or the arbitrary lines drawn by colonizers hundreds of years ago.

And much like the pandemic, the burden of failing to meet the moment when it comes to climate change will have (and already has had) the worst impact on poor people and people of color—many of whom did not vote for Republicans. In Texas, incarcerated people and immigrants in border communities bore the brunt of the storm. Poor people were more likely to be unable to find somewhere warm to shelter or have extra supplies on hand. Not to mention absorb the lost wages from the state being paralyzed.

But first let’s spend some time with the singularly Republican situation in Texas and some of its unique aspects. The ingredients include the way the state’s power grid, which is isolated from the rest of the country, and regulators who weren’t required to prepare for deep winter freezes, collided with extreme weather to leave millions of people freezing and powerless in the dark. Then, the problems began to compound with carbon monoxide poisonings caused by people trying to stay warm, hospitals unable to care for patients, and firefighters incapable of putting out fires. But it’s not just winter weather in typically warm states that will cause these deadly infrastructure failures.

Perhaps the best comparison to the disaster in Texas is the one that happened in California just last year. “The one common element from the California situation and what appears to be the case in Texas, is weather,” said Richard Glick, chair of the Federal Energy Regulatory Commission last week. “All the experts tell us this type of wild unanticipated weather is going to happen much more frequently than has happened in the past.”

As the coronavirus continued to rampage through the country, high temperatures and high winds sparked wildfires throughout the Golden State. Utility operators instituted rolling blackouts during a heatwave to reduce strain on the electric grid and to prevent wildfires. By the fourth day of the blackouts, Californians were outraged. “These blackouts, which occurred without prior warning or enough time for preparation, are unacceptable and unbefitting of the nation’s largest and most innovative state,” Democratic Gov. Gavin Newsom said at the time. Mark Toney, executive director of the Utility Reform Network called out the power operators for failing to keep the lights on. “Why did they not do a better job of managing the grid, which is their job?”

The past tells us that the future will look worse. Heat waves like the one that struck California last year, will only become more frequent, killing people and putting stress on our power grid in liberal and conservative enclaves alike. According to a model by the Union of Concerned Scientists, if we fail to act to reduce carbon emissions, in 30 years, Washington, DC, will face an average of 41 days with a heat index above 105 degrees. Its reliably blue surrounding suburbs don’t fare much better.

And then there are hurricanes. Last year Hurricane Laura brought 150-mph winds to the Gulf Coast, leaving 600,000 without power for days. Entergy, a power company that serves parts of Louisiana and Texas said the storm caused some of the worst damage ever. The hurricane was followed by an intense heatwave. While Louisiana dealt with five named storms last season, we’ve seen how liberal-leaning states in the North and on the east coast are not immune. In 2012 Superstorm Sandy roared up the East Coast leaving behind $65 billion worth of damage, 117 deaths, and massive destruction. Immediately after the storm, more than 8 million people in 21 states were left without power. Since climate change is making hurricanes more powerful, we can expect more record-breaking storms in the near future. As my colleague Rebecca Leber wrote, “The federal government, states, and cities still have a lot of work to do to recognize that the future threats will not look anything like what we’ve seen before.”

Scientists warn that today’s disasters will only get worse without rapid action. The Biden administration, which is taking climate change seriously unlike its predecessor, may have committed to fight for climate-conscious policies, but they are falling far short of the radical approach that’s needed to stave off future disasters. For example, what about aiming for a drastic cut in our emissions by transforming our transportation and agricultural systems?

Climate change is a scientific phenomenon but our response to it—not to mention many of its causes—go back to politics. Once again, Texas has laid bare the dangerous pitfalls of an ideology that regards regulation as a dirty word and corporate greed as a value. Surely, the Republican officials who were more concerned with profit than providing a service to their constituents should be blamed for the disaster in the Lone Star state. But the real lesson isn’t that red states will suffer blue ones are safe, but rather that we’re all vulnerable, regardless of the electoral habits of our communities. Don’t let the GOP’s monopoly on ignoring climate science trick you into believing that a Texas-like tragedy can’t happen in your liberal enclave. It already has. And it will happen again.