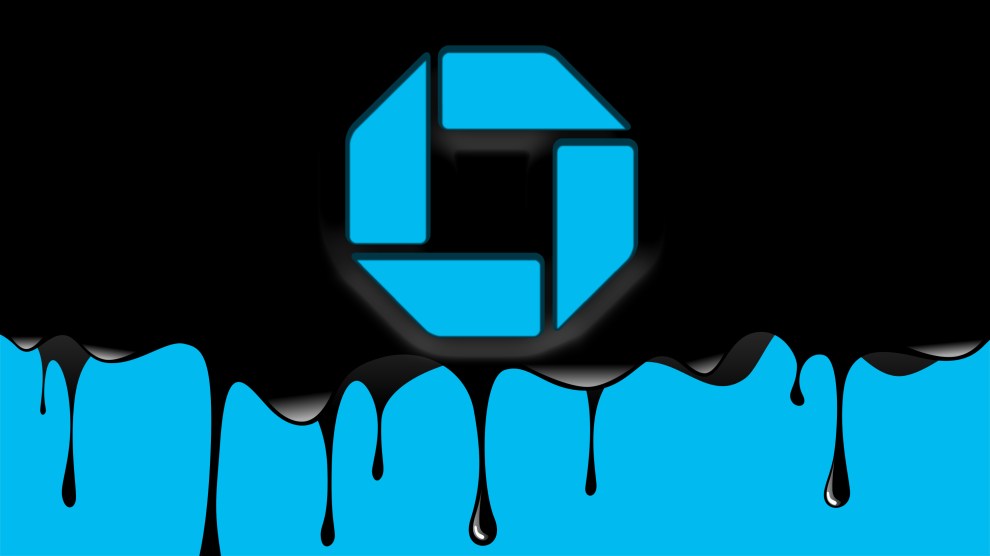 In October, top executives at JPMorgan Chase wrote in an op-ed for Fortune that the “clock is ticking” on the climate crisis and that JPMorgan planned to be part of the solution. The bank, they said, would align its immense financing portfolio to meet the Paris climate goals in the oil and gas, electric power, and automotive sectors. “We’re optimistic that industry and governments will harness the momentum and rise to the challenge,” they wrote. “Our bank intends to, and our shared future depends on it.”

Environmental watchdogs have had their doubts about JPMorgan’s commitment—not least because the bank at the time had on its board of directors the former ExxonMobil CEO Lee Raymond, a longtime climate skeptic who led the corporation when it aggressively fought government action to address climate change. Recently, in a report on fossil fuel financing by the climate group Rainforest Action Network, JPMorgan Chase earned the distinction as the “worst banker of fossil fuels” between 2016 to 2020, financing nearly $317 billion for the fossil fuel industry in that period, including oil and gas drilling in the Arctic and tar-sands extraction in Canada.

For example, the executives proposed a program modeled after the student loan TARP program to give the banking sector an injection of government-backed equity when it was facing steep losses.

The bank undercuts its climate promises in important ways that are less visible to the public. The environmental group Friends of the Earth obtained emails from last April between JPMorgan Chase and top Treasury Department officials through a Freedom of Information Request and subsequent lawsuit. The batch of emails show JPMorgan requesting changes to government lending programs meant to help smaller and medium-sized businesses weather the economic fallout of the pandemic. They also capture an unusual snapshot of Wall Street’s interdependence on the future of fossil fuels.

In March 2020, Congress passed the Coronavirus Aid, Relief, and Economic Security (CARES) Act, providing $454 billion to the Federal Reserve to support businesses. The move also gave then–Treasury Secretary Steven Mnuchin broad powers to adjust the terms of the lending as he saw fit. Three weeks after the law passed, a top executive at JPMorgan forwarded on an email to then–Treasury Deputy Secretary Justin Muzinich that outlined two items under the subject line “MSL industry review and Oil and Gas Banking Commentary.” Part of the email referenced the Main Street Lending Program, called by the shorthand MSLP, targeting small- and medium-sized businesses that were left out of other COVID relief packages.

The same email includes a frank discussion of the ways the government could directly support bailouts for the oil and gas sector, and protect banks exposed to heavy losses when oil prices were in free fall. One JPMorgan employee, Travis Machen, the head of Financial Institutions Corporate Client Banking, wrote, “Numerous banks, largely scattered across the South, have meaningful direct exposure to oil and gas (generally ranging from ~3-11% of total loans)” with fewer than 50 banks having “measurable direct exposure to the oil and gas sector.”

Machen lists a menu of ideas for the federal government to intervene on the banks’ behalf, including “additional direct government support to the energy sector (similar to programs for the airline industry).” He suggests tailoring programs like the Main Street Lending Program, as well as a government bailout. The email includes some suggestions that were ultimately not taken up by the administration. For example, the executives proposed a program modeled after the troubled-asset TARP program to give the banking sector an injection of government-backed equity when it was facing steep losses.

“This email exchange is a surprisingly candid picture of the risk Big Oil poses to the stability of our financial system.”

Friends of the Earth program manager Lukas Ross says the exchange gives a “glimpse at the depths the industry was willing to go to protect fossil fuel investments when the entire future of the economy” is at stake. “This email exchange is a surprisingly candid picture of the risk Big Oil poses to the stability of our financial system.”

JPMorgan characterized the emails differently. “We engaged with the government to provide feedback on the Main Street Lending Program broadly and across all industries,” a spokesperson at JPMorgan Chase said in a statement. She said that the part of the email that Mother Jones reviewed was actually sent to the Treasury deputy secretary in error. The section that was intended for the deputy secretary, she said, was an attachment that Mother Jones couldn’t review because it was redacted to protect business confidentiality. In that attachment, “at no point did we advocate for any specific industry,” the spokesperson said.

It’s unclear, based on the documents, how the Trump administration took up the specific items in the email. But there is plenty of evidence that both Wall Street and the fossil fuel sector did ultimately shape the terms of government lending to businesses. A March report from Public Citizen found the fossil fuel sector “in part responsible for the program’s failure to meet its goals,” weakening language on employer retention, loosening requirements around financial needs, and increasing the loan size even to businesses employing fewer than 10 workers. The result was 46 fossil fuel companies receiving $828 million in MSLP loans by the end of November. Twelve of those companies each received loans of $35 million or more:

After the first version of the MSLP term sheet was released, the fossil fuel industry and its political allies lobbied to weaken constraints on borrowers, hoping to make MSLP loans available to gas and oil companies. This lobbying included letters sent by The Independent Petroleum Association of America (IPAA) and Sen. Ted Cruz (R-Texas), in which they argued that loosening the criteria for eligible borrowers and weakening restrictions on loan use would be critical to supporting the struggling energy sector. 9 Following these lobbying efforts, the Fed implemented several changes to the MSLP term sheet, many of which mirrored the IPAA’s and Cruz’s requests.

Banks are not a direct arm of the fossil fuel industry, according to the financial accountability group Little Sis, but they are indispensable in providing loans and financial services to prop up the industry so it can continue to exist and expand. That relationship can seriously backfire in the volatile market of oil prices. JPMorgan’s emails to Treasury cites precedent for government intervention for the financial sector and other industries when the economy is in crisis, but precedent from the 2008 recession also shows how Wall Street has relied on taxpayer bailouts when its bets falter. Last year’s pandemic was an early lesson in the consequences of a carbon bubble, where banks like JPMorgan showed just how vulnerable the entire financial system is to a crash amid overvalued oil prices in a world dealing with climate crises.

JPMorgan has taken a few small steps to restore its reputation around climate change: The bank has promised to phase out funding of Arctic oil exploration. Its financing of the fossil fuel industry did drop significantly in 2020, though whether that’s a reflection of the pandemic or sustainability commitments is unclear. Last December, after a year of steady pressure to oust the 33-year JPMorgan board member Lee Raymond, the former Exxon chief resigned. No specific reason was given for his resignation.

Banks, including JPMorgan, have voluntarily jumped ahead of expected government scrutiny of the sector’s investment in fossil fuels: Treasury Secretary Janet Yellen has repeatedly tied climate impacts to economic instability, and President Joe Biden is expected soon to direct Securities and Exchange Commission and Federal Reserve to step up requirements that companies disclose the impacts global warming has on investments to shareholders. But banks and their regulators have much more work to do. Eventually, Ross predicts, “the price of oil is headed for zero again, and it’s going to stay there forever. The question is whether or not we’re going to have a reasonable and safe phasing down of this industry, or if it’s going to be a rough landing. This is a preview of what could happen when the carbon bubble finally bursts.”