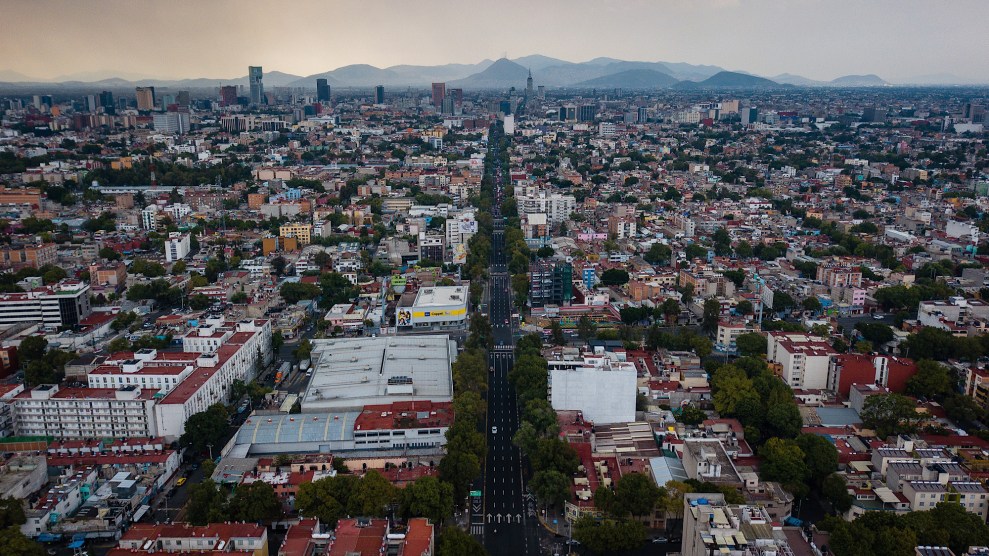 When Darío Solano‐Rojas moved from his hometown of Cuernavaca to Mexico City to study at the National Autonomous University of Mexico, the layout of the metropolis confused him. Not the grid itself, mind you, but the way that the built environment seemed to be in tumult, like a surrealist painting. “What surprised me was that everything was kind of twisted and tilted,” says Solano‐Rojas. “At that time, I didn’t know what it was about. I just thought, ‘Oh, well, the city is so much different than my hometown.’”

Different, it turned out, in a bad way. Picking up the study of geology at the university, Solano‐Rojas met geophysicist Enrique Cabral-Cano, who was actually researching the surprising reason for that infrastructural chaos: The city was sinking—big time. It’s the result of a geological phenomenon called subsidence, which usually happens when too much water is drawn from underground, and the land above begins to compact. According to new modeling by the two researchers and their colleagues, parts of the city are sinking as much as 20 inches a year. In the next century and a half, they calculate, areas could drop by as much as 65 feet. Spots just outside Mexico City proper could sink 100 feet. That twisting and tilting Solano‐Rojas noticed was just the start of a slow-motion crisis for 9.2 million people in the fastest-sinking city on Earth.

The foundation of the problem is Mexico City’s bad foundation. The Aztec people built their capital of Tenochtitlan on an island in Lake Texcoco, which is nestled in a basin surrounded by mountains. When the Spanish arrived, destroyed Tenochtitlan, and massacred its people, they began draining the lake and building on top of it. Bit by bit, the metropolis that became modern-day Mexico City sprawled, until the lake was no more.

And that set in motion the physical changes that began the sinking of the city. When the lake sediment under Mexico City was still wet, its component particles of clay were arranged in a disorganized manner. Think about throwing plates into a sink, willy-nilly—their random orientations allow lots of liquid to flow between them. But remove the water—as Mexico City’s planners did when they drained the lake in the first place, and as the city has done since then by tapping the ground as an aquifer—and those particles rearrange themselves to stack neatly, like plates put away in a cupboard. With less space between the particles, the sediment compacts. Or think of it like applying a clay face mask. As the mask dries, you can feel it tightening against your skin. “It’s losing water and it’s losing volume,” says Solano‐Rojas.

Mexico City officials actually recognized the subsidence problem in the late 1800s, when they saw buildings sinking and began taking measurements. That gave Solano‐Rojas and Cabral-Cano valuable historic data, which they combined with satellite measurements taken over the past 25 years. By firing radar waves at the ground, these orbiters measure in fine detail—a resolution of 100 feet—how surface elevations have been changing across the city.

Using this data, the researchers calculated that it’ll take another 150 years for Mexico City’s sediment to totally compact, although their new modeling shows that subsidence rates will actually vary from block to block. (That’s why Solano‐Rojas noticed tilted architecture when he first arrived.) The thicker the clay in a given area, the faster it’s sinking. Other areas, particularly in the city’s outskirts, might not sink much at all because they’re sitting on rock instead of sediment.

That sounds like a relief, but it actually exacerbates the situation because it creates a dangerous differential. If the whole city sank uniformly, it’d be a problem, to be sure. But because some parts are slumping dramatically and others aren’t, the infrastructure that spans the two zones is sinking in some areas but staying at the same elevation in others. And that threatens to break roads, metro networks, and sewer systems. “Subsidence by itself may not be a terrible issue,” says Cabral-Cano. “But it’s the difference in this subsidence velocity that really puts all civil structures under different stresses.”

This is not just Mexico City’s problem. Wherever humans are extracting too much water from aquifers, the land is subsiding in response. Jakarta, Indonesia is sinking up to ten inches a year, and California’s San Joaquin Valley has sunk 28 feet. “It goes back centuries. The human thought was that this [water] is an unlimited supply,” says Arizona State University geophysicist Manoochehr Shirzaei, who studies subsidence but wasn’t involved in this new research. “Wherever you want, you can poke a hole in the ground and suck it out.” Historically, pumping groundwater has solved communities’ immediate problems—keeping people and crops alive—but created a much longer-term disaster. A study earlier this year found that by the year 2040, 1.6 billion people could be affected by subsidence.

But if the problem is that the ground isn’t wet enough, couldn’t engineers in Mexico City just inject water into the clay sediment to, well … re-inflate it? “The answer to that is, unfortunately, no. We would not be able to see the ground go back up,” says University of Oregon geophysicist Estelle Chaussard, lead author of a new paper with Cabral-Cano and Solano‐Rojas describing the modeling. “Almost the entirety of the subsidence that we’re seeing is irreversible.” (The researchers got straight to the point in their paper, titling it: “Over a Century of Sinking in Mexico City: No Hope for Significant Elevation and Storage Capacity Recovery.”)

“We suspect that the final cost is going to be much larger than a very large earthquake, because it happens every day, every second.”

This process of compacting the clay is hard to undo, Solano‐Rojas agrees. At best, previous attempts to re-inject groundwater elsewhere around the world have found that they only gained back an inch or so of elevation. Think of those stacked dishes—and particles—again. Or how hard it is to re-wet your dried clay mask to scrub it off. “When it gets dry, it’s really hard to put water back into the clay,” he says, because “the structure of the clay changes. And these kinds of plates, or kinds of sheets, rearrange and don’t allow the water to go back into its structure.”

From studying subsidence as a global phenomenon, scientists know that halting groundwater extraction can stop the sinking—but it’s not a guarantee. Indeed, these researchers are finding parts of Mexico City that have kept on sinking after water extraction there has ceased. “That means that our buildings and everything built on top of the surface loses elevation, and that’s lost forever,” says Cabral-Cano. “And worst of all, the capacity of the aquifer to store water is severely diminished.”

It might make you wonder how much this will cost the city in the long run. These researchers are actually currently working on that calculation. “We suspect that the final cost is going to be much larger than a very large earthquake, because it happens every day, every second,” says Cabral-Cano. “The city goes down—relentlessly, it goes down.”

Mexico City is 573 square miles of roads, pipes, public transportation, cables, and buildings. After a big earthquake, the city will calculate the cost to repair the infrastructure and get to it. But subsidence is a perpetual problem: Patch a road or building foundation one year, and it might be broken again the next. A government might be able to throw money at this crisis, but most homeowners can’t. “There are vast amounts of areas where the damage is not just a slightly tilted sidewalk,” says Cabral-Cano. “It’s somebody’s house. And a very, very large majority of houses in Mexico do not have insurance for structural damage.”

For the residents of Mexico City, that’s going to add up to a whole lot of money. And Cabral-Cano thinks it’s important to do that math. “It’s not until you have a solid number—and it becomes a very large number—[that] we think that city managers are going to be looking at this more carefully,” he says.