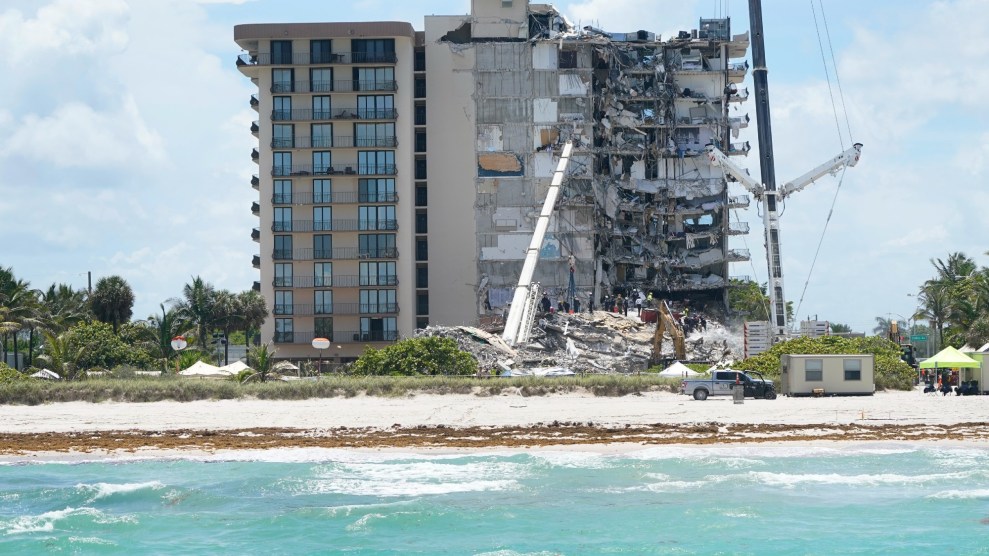 The deadly collapse of a 12-story condominium tower on a barrier island north of Miami Beach early Thursday morning has spurred new calls to survey buildings in areas vulnerable to sea level rise and subsidence, highlighting one of the lesser-known threats of climate change.

The cause of the disaster, which killed at least four people and left more than 150 missing as of Friday, remains unclear as rescuers pick through the rubble for survivors. But scientists have long feared for the future of this densely populated strip of land atop porous limestone as rising global temperatures increase sea levels.

Land beneath buildings tends to sink as dirt and rock shift as a result of removal or erosion. From 1993 to 1999, the Champlain Towers South high-rise on the Surfside beachfront sank roughly 2 millimeters per year, according to satellite data used in a study that Florida International University researcher Shimon Wdowinski published in April 2020. At the same time, sea levels are rising approximately one-eighth of an inch per year.

Wdowinski’s findings, first reported in USA Today, put a new focus on how ocean waters that have risen more than a foot over the past century can destabilize the porous ground on which many coastal cities sit.

“The land is moving downward,” he said. “It’s very devastating what happened.”

“It’s important to recognize this is not just a Miami problem.”

John Englander, an author and expert on sea level rise, said he expects the deadly incident will lead to a review of coastal development and building integrity in the Miami metropolitan area, which is home to more than 6 million people. He said officials should “quickly and carefully” examine the impact of both ground subsidence and the intrusion of saltwater, which can corrode concrete and steel. Miami is plagued by so-called king tides, which flood areas of the city with saltwater and are becoming worse as sea levels rise.

“The questions certainly need to be asked,” Englander said. “It’s important to recognize this is not just a Miami problem. But certainly the density of coastal development in Miami kind of makes it a poster child for the problem.”

A 2020 report from Resources for the Future, a Washington, D.C.-based think tank, concluded that Miami is “one of the most at-risk cities in the world from the damages caused by coastal flooding and storms.”

The disaster’s timing emphasized the cascading crises linked to global warming. As the Biden administration struck a deal with Republicans to potentially water down an infrastructure package experts already dubbed insufficient to drastically curb emissions, a historic heatwave roasted the American West, with temperatures in the high triple digits expected in the normally temperate northwestern states of Washington and Oregon this weekend. Climate policy fights have long focused on slashing pollution from power plant smokestacks and automobile tailpipes, but buildings―which burn gas and oil for heating and cooking, directly producing at least 13 percent of US emissions―are increasingly coming under scrutiny.

Most of those efforts have zeroed in on banning natural gas in new construction and requiring real estate developers to accommodate electric cars and induction stovetops. But the costly project of retrofitting old buildings for electrification could now give way to new calls to guard against those structures becoming unsafe as climate change worsens.

The technology Wdowinski employed in his study could be used to review all of Miami’s infrastructure. Satellites equipped with Interferometric Synthetic Aperture Radar, or InSAR, use radar signals to measure changes in land-surface altitude from space, according to the US Geological Survey. An existing constellation of European satellites offers the data free, so buildings could be surveyed relatively cheaply, relying primarily on skilled analysts to make sense of the information.

This week’s disaster wouldn’t be the first to trigger a broad environment-linked investigation in the Sunshine State. In August 1992, Hurricane Andrew slammed into South Florida as a massive Category 5 storm—one of the most powerful cyclones to make landfall in the United States. It destroyed more than 63,000 homes, killed 61 people and caused $26.5 billion in damage, which at the time was more than any hurricane in US history.

In response, Florida conducted an evaluation of its building codes and enacted stronger statewide standards in 2002. A later study from the University of Florida concluded that the changes helped limit damage during subsequent hurricanes.

But the updated rules applied only to new structures, meaning buildings constructed prior to 2002 were exempt. One of those buildings was the 12-story condo building that collapsed Thursday, which was built in 1981.

Though it remains unclear what caused the structure to fall, Kenneth S. Direktor, an attorney who represents the association that operates the building, told the New York Times that the condo was about to undergo major repairs to address rusted steel and damaged concrete. Direktor said an engineer identified those issues during a recent inspection but that there was no indication the building could collapse. Miami-Dade County requires older buildings to be recertified as structurally sound every 40 years.

Harold Wanless, a geography professor and sea level rise expert at the University of Miami, expects a combination of factors led to the disaster and called for a thorough investigation. “Some of the possible causes would be unique to this structure,” he said in an email. “Others would have broader implications to other coastal high-rises. I am not sure why this particular building had some kind of subsidence occurring. That is really the target question.”

Wanless questions the likelihood that saltwater intrusion played a major role, noting that sea levels in the area have risen about 6 inches in the 40 years since the building was constructed. “That seems small for a saline inundation story, but there are so many questions at this point,” he said.