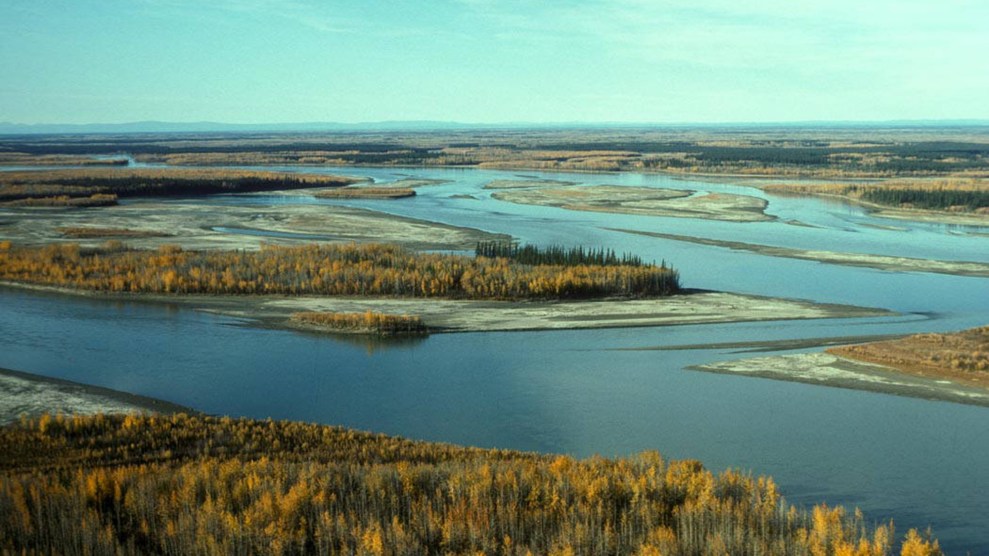 Aerial view of the Yukon River.U.S. Fish and Wildlife Service

Every spring, the shallow ponds and spruce forests of the Yukon Flats, in Interior Alaska, stir with the flapping of scoters and scaups, the laugh-like yelps of white-fronted geese and the high-pitched whistle of wigeons. Up to 2 million birds arrive each year to nest in some of North America’s most productive waterfowl breeding grounds. Along with salmon, moose and other wildlife, they provide food for the human residents of the region, where a half-gallon of milk can cost $7.99.

“It’s not only our subsistence…It’s a part of our identity, because our people have lived here since our creation.”

“It’s not only our subsistence,” said Rochelle Adams, a member of the Gwichyaa Zhee Gwich’in Tribal Government of Fort Yukon, who is from the villages of Fort Yukon and Beaver. “It’s our connection to the lands and waters. It’s a part of our identity, because our people have lived here since our creation.”

This summer, drilling rigs will join the wildlife in the Yukon Flats, as Hilcorp Alaska, a private company with a reputation for regulatory violations, explores for oil and gas. Hilcorp is operating under a 2019 agreement with Doyon Ltd., an Alaska Native regional corporation, which owns 1.6 million acres of mineral rights bordering the Yukon Flats National Wildlife Refuge. The companies’ plans have raised concerns among local tribes and exposed the complicated dynamics between for-profit Alaska Native corporations and sovereign tribal governments.

Soon after Doyon announced its deal with Hilcorp, the Gwichyaa Zhee Gwich’in Tribal Government passed a resolution opposing oil and gas development in the Yukon Flats, citing worries about environmental degradation, threats to traditional ways of life and infringements on tribal sovereignty. Last fall, the board of the Tanana Chiefs Conference, which represents 42 tribal governments in Alaska’s Interior, also opposed the project. “What we get to consume here is the most unadulterated food on the planet,” said Dacho Alexander, a Gwichyaa Zhee Tribal Government council member and former chief. “Our water is clean. Our environment is clean. There’s just simply no dollar amount that you could put on those places.”

To Alexander, Doyon’s push to explore for fossil fuels illustrates a “major disconnect” between Alaska Native regional corporations and tribal governments. Unlike federally recognized tribes, which are sovereign nations, Alaska Native corporations are for-profit companies owned by Alaska Native shareholders, who receive annual dividends of a few hundred to a few thousand dollars. They were created under the 1971 federal Alaska Native Claims Settlement Act to give tribal members economic autonomy, primarily through ownership of natural resources. Today, Doyon is the largest private landowner in Alaska, with more than 20,000 shareholders.

“A lot of people seem to give Alaska Native corporations a pass because they are titled Alaska Native corporations,” Alexander said. “There is this view that what they are doing is in the best interest of the people.” But even when individual shareholders do not want to develop natural resources, Alexander said, they’re represented by board members whose duty is to the corporation’s bottom line. Doyon did not notify its shareholders, according to Alexander and Adams, both shareholders, and did not consult all tribal governments in the Yukon Flats before announcing its deal with Hilcorp in December 2019. (Doyon refused to comment for this story.)

Now, Doyon and Hilcorp are proceeding to drill 15 stratigraphic boreholes—shallow test wells for soil analysis—near the Gwich’in villages of Birch Creek and Fort Yukon by the end of summer. Doyon has promised that oil and gas development will bring economic opportunity to the region. The company entered into a “cooperation agreement” with Tihteet’ Aii, the Birch Creek village corporation, but neither entity has released specifics about it or the projected economic benefits. (Tihteet’ Aii did not respond to requests for comment, and the Birch Creek Tribal Government declined to comment.)

Doyon’s press releases assert that Hilcorp’s drilling this summer will not cause environmental damage. Yet opponents worry that exploration could lead to long-term development, and they have concerns about Hilcorp’s environmental record: The company, which bought all of BP’s fossil fuel assets and interests in Alaska in 2020 and is now one of the state’s biggest oil and gas producers, has been responsible for numerous natural gas leaks in Alaska’s Cook Inlet.

In a 2015 letter to Hilcorp, the chair of the Alaska Oil and Gas Conservation Commission, which regulates fossil fuel production in the state, wrote that regulatory noncompliance is “endemic” to the company’s approach. Since then, Hilcorp has accrued three times more citations than each of Alaska’s biggest oil producers during that time, ConocoPhillips and BP, according to state documents High Country News obtained via a records request.

As Hilcorp begins drilling in the Yukon Flats, Adams, who started a Facebook group to raise awareness of the project, recalled a 2017 leak from a Hilcorp gas pipeline in Cook Inlet that lasted for about four months. “I can’t even imagine what can happen to the Yukon River,” which bisects the Flats, she said. “I don’t want to imagine.”