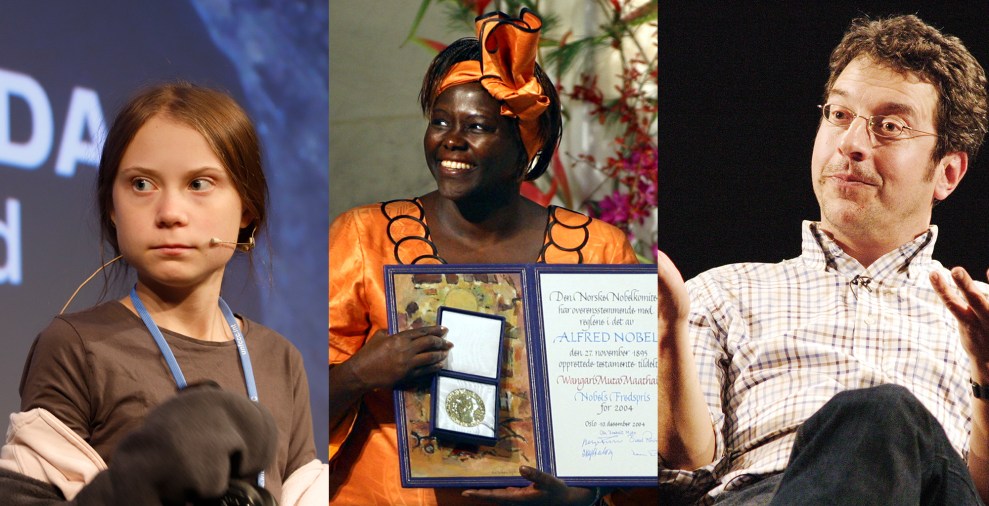 From Greta Thunberg to James Lovelock, publisher Penguin Classics has come up with a “new canon” of the environmental literature, which it believes has “changed the way we think and talk about the living Earth.”

The move is part of a growing trend in publishing for books focused on the climate, whether from big hitters such as David Attenborough or Bill Gates, whose How to Avoid a Climate Disaster was out in February, or so-called “cli-fi,” climate fiction, from writers including Richard Powers and Jenny Offill. Penguin’s Green Ideas series capitalises on this appetite, collecting 20 short books it believes constitute “the classics that made a movement,” by “visionary thinkers around the world [who] have raised their voices to defend the planet.”

The move is part of a growing trend in publishing for books focused on the climate.

Nobel peace prize winner Wangari Maathai is included with her exploration of the power of trees and why humans destroy the forests that keep us alive; Rachel Carson for her revelations about how man-made pesticides have destroyed wildlife; George Monbiot for his call for humanity to wake up to the destruction of the planet; and Naomi Klein for her look at how deregulated capitalism is waging war on the climate. Ranging across art, literature and gardening to technology and politics, Penguin believes that each title, extracted from longer works, “deepens our sense of our place in nature,” and that together they can “point the way to a fairer, saner, greener world.”

The publisher came up with the idea for the series in the wake of publication of Thunberg’s No One Is Too Small to Make a Difference. “Greta had raised the temperature of the global conversation—suddenly we were talking about a crisis rather than just climate ‘change’—and there was a clear and growing hunger for more environmental ideas,” said editor Chloe Currens.

Penguin set out to “trace the emerging environmental canon,” moving from Aldo Leopold’s A Sand Country Almanac (1949)—the forester and conservationist’s meditation on the US’s wildlands is included in the series—to Carson’s Silent Spring, which exploded into public consciousness in the 60s, and on into the present day.

“The 20 books we chose struck us as quite obvious starting points for the series, in terms of their originality and their impact,”

“The 20 books we chose struck us as quite obvious starting points for the series, in terms of their originality and their impact,” said Currens. “But there’s such an abundance of important and stimulating environmental writing that the list couldn’t be exhaustive.”

Robin Wall Kimmerer, a botanist and member of the Citizen Potawatomi Nation, is included for her guide towards a more reciprocal, grateful and joyful relationship with the earth. Kimmerer said that she was “deeply honoured that my words will stand in the company of my literary heroes.”

“This series feels like a collective expression of love and grief for the living world and could not be more important in this moment of peril,” said the author. “I view my writing as an act of reciprocity with the land, a way of returning in some small way, the gifts that have been shared with me. The Indigenous worldview offers approaches to healing our relationship with land, which is a counterweight to the dominant materialist worldview. It is both ancient and urgent and I am grateful that it is illuminated here.”

Kimmerer hopes her essays “will work as medicine for a broken relationship with land, healing us from the illness of species loneliness and human exceptionalism that the western worldview has produced.”

Amitav Ghosh, included in the series for an exploration of how our collective imaginations fail to grasp the scale of environmental destruction, said he was “very glad” to be included. “In my book I make the case that climate change is fundamentally a problem of culture, and I try to pinpoint the precise reasons why this subject is difficult to address within the traditional boundaries of modern literature,” he said.

Jared Diamond’s contribution to the series explores how the remote civilization on Easter Island destroyed itself by exploiting its own natural resources. “Why does the story of Easter Island society’s collapse so rivet our attention?” said Diamond. “Because Easter’s deforestation and collapse were so complete; because Easter was the most isolated human society on Earth, so its collapse was thus purely for environmental reasons, there being no other humans around to complicate the interpretation; because Easter’s fate may prove to be a metaphor for the fate of our modern Earth society, as isolated in space as Easter is isolated in the Pacific Ocean; and because of another metaphor: that some people nevertheless deny Easter’s clear story, just as some people deny the clear risks facing our modern world.”

Penguin hopes to add to the series. “It’s a growing, evolving ecosystem of great ideas,” said Currens. “I hope that the series will be used by readers as a way of engaging with some of the key ideas in modern environmental thought—that it will offer an accessible path through the vibrant, urgent, and perhaps occasionally overwhelming wider world of ecological writing.”