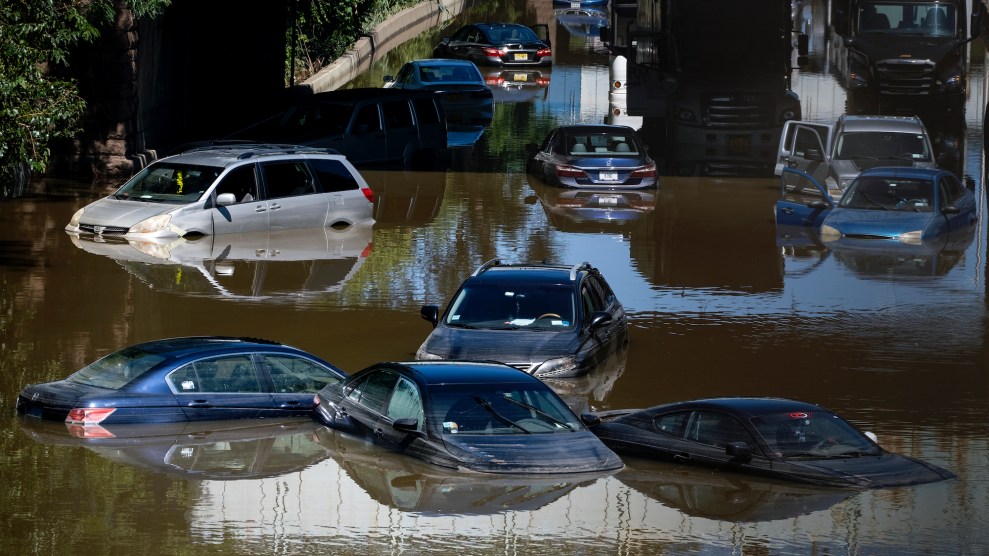 Cars and trucks remained stranded on a Bronx expressway on Thursday, the day after the remnants of Hurricane Ida dropped record levels of flooding rain on the entire region.Craig Ruttle/AP

The full scope of the devastation wrought by Hurricane Ida in the northeast is now starting to become clear. In New Jersey, the storm killed at least 25 people, more than half of the 49 confirmed fatalities in the region so far. Another six New Jerseyans were still missing as of Friday, the New York Times reports.

At least a third of the deaths in New Jerseys occurred after people were trapped in cars on flooded roads and highways. The severity of the storm caught the region completely off guard. As the Times explained:

Screeching alerts had sounded repeatedly on cellphones late Wednesday, warning people to stay inside, but no travel bans were put in place in New Jersey or New York, where 16 deaths — including 13 in New York City — have been linked to the storm. On Friday, in an acknowledgment of the growing risk of flash flooding as climate change unleashes increasingly intense storms, New York City’s mayor, Bill de Blasio, announced that the city would increase its use of evacuation orders and travel bans.

In New York City, 11 people died when their basement apartments flooded. Mayor Bill de Blasio has said that people will be able to remain in the basement units, which are often rented out illegally. As my colleague Nathalie Baptiste wrote this week, New Yorkers often don’t have any other options:

A lot has been written about the shadowy world of unlicensed basement apartments, where low-income families cram into small, damp spaces because they can’t afford anything else. They often only have one way out—an especially perilous situation when it comes to fires or floods. It’s now clear that with the climate crisis, the network of affordable but dangerous basement dwellings is not sustainable.

Curtis Silwa, the founder of the Guardian Angeles and the Republican nominee for mayor, is now saying he will go after the owners of illegal basement apartments. Where he expects people who live in those units to go in a city with a severe affordable housing shortage is unclear.

Further south in Philadelphia, much of the Vine Street Expressway, which runs through the heart of the city, remains closed as of Saturday. The city’s annual Made in America music festival, however, is still on. Attendees are supposed to get off the expressway early to avoid the ongoing road closures.