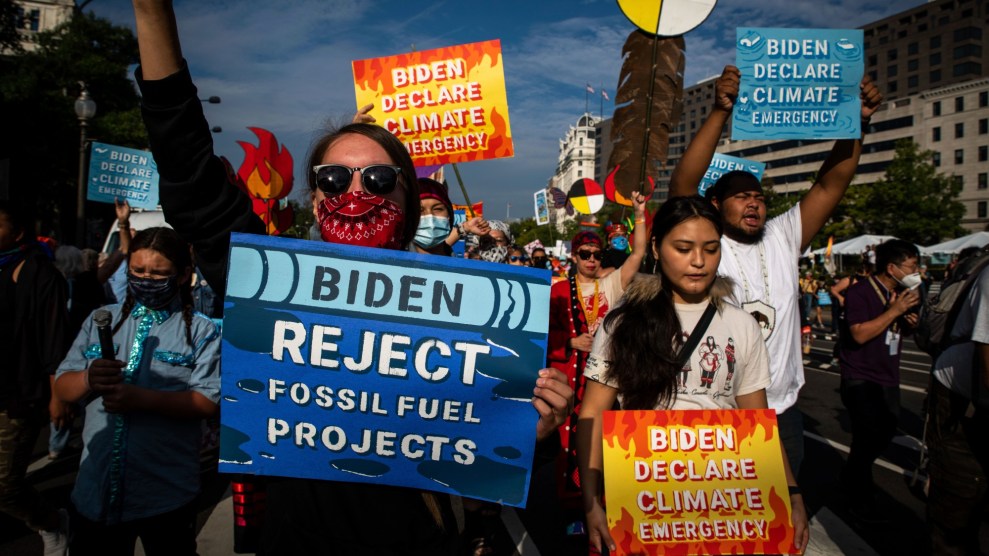 With furious environmental activists at the gates of the White House, and congressional Democrats fretting that a priceless opportunity to tackle catastrophic global heating may be slipping away, Joe Biden is facing mounting pressure over a climate agenda that appears to be hanging by a thread.

Biden’s allies have warned that time is running perilously short, both politically and scientifically, for the United States to enact sweeping measures to slash planet-heating emissions and spur other major countries to do the same. Failure to do so will escalate what scientists have said are “irreversible” climate impacts such as disastrous heatwaves, floods, wildfires and a mass upheaval of displaced people.

The administration’s multitrillion-dollar social spending package, widely considered the most comprehensive climate legislation ever put forward in the United States, must survive razor-thin Democratic majorities in Congress and, the House speaker, Nancy Pelosi, has vowed, pass in time for crucial UN climate talks in Scotland that begin in about two weeks.

“They will look ridiculous if they show up with nothing. It would be bad for US leadership, bad for the talks, and disastrous for the climate. Just disastrous.”

Embedded in the measure are plans to dramatically cut carbon emissions warming the planet and fueling climate disasters, a potentially historic set of policies that Pelosi has said would serve as “a model for the world”. But the 31 October deadline for passing the spending package and a smaller companion infrastructure bill appears increasingly ambitious as negotiations drag on between the White House, Democratic leaders and a pair of centrist holdouts in the Senate.

The prospect of the world’s leading economic power arriving in Glasgow with no domestic policy to cut emissions will make it harder to convince other major emitters, primarily China, to do more at a time when governments are collectively failing to avert unlivable global heating.

“They will look ridiculous if they show up with nothing,” Senator Sheldon Whitehouse, a Democrat, told the Guardian. “It would be bad for US leadership, bad for the talks, and disastrous for the climate. Just disastrous.

“The vast majority of Senate Democrats understand this is our last chance to act,” Whitehouse continued.

The bill includes a program of payments and penalties to ensure utilities phase out fossil fuels from America’s electricity supply, a huge expansion in tax credits for clean energy and new restrictions on methane, a potent greenhouse gas that is emitted from oil and gas drilling. The legislation would slash US emissions by about 1 billion tons by 2030, bringing Biden within striking distance of his target of cutting America’s emissions in half by this point.

Whitehouse also revealed that the president’s administration “will not oppose” a new price on carbon emissions being added to the bill, following negotiations with Senate Democrats. “We have a very good chance of getting that,” he said. The White House did not respond to a request for comment on the talks.

The carbon fee, which would initially be set at $15 per ton of emissions before rising rapidly upwards over the course of several years, has long been a favored policy of economists and some moderate Republicans as a way to encourage polluters to switch to cleaner energy but has latterly been disregarded by activists and progressives.

However, these measures will have to garner the vote of every Democrat in the Senate to pass, with Joe Manchin, a centrist from West Virginia, skeptical of the size and scope of the $3.5 trillion spending proposal. Manchin, a major recipient of donations from the coal industry, has said it “makes no sense” to pay utilities to phase in solar and wind power.

Manchin is reportedly set to block the clean electricity program, which forms the main muscle of the climate package. This could prove a hugely consequential blow to the effort to constrain dangerous global heating. “This is high on the list of most consequential actions ever taken by an individual senator,” tweeted the climate campaigner Bill McKibben. “You’ll be able to see the impact of this vain man in the geologic record.”

He plans to gut Biden's climate plan, and with it the chances for swift global progress.
This is high on the list of most consequential actions ever taken by an individual Senator; you'll be able to see the impact of this vain man in the geologic record. https://t.co/6ReMn8ZGdp

Whitehouse admitted it was unclear what Manchin will ultimately do but that he was confident that “there’s a window in which negotiations with Joe can produce a bill to reduce emissions enough so we are not in danger’s way.”

Democrats are working feverishly to trim the $3.5 trillion proposal to about $2 trillion, in order to win the votes of centrists without losing the support of progressives. Among the many pressing questions Democrats must answer as they hurtle to meet their end-of-the-month deadline is how bold to go on climate.

“Even if we pass the Build Back Better Act as it is, that doesn’t get us to net-zero by 2050…We are going to have to do more.”

Failure to pass the legislation would be disastrous for the United States and the global community, the US climate envoy, John Kerry, said in an interview with the Associated Press.

“It would be like President Trump pulling out of the Paris agreement, again,” he warned.

The Build Back Better plan will put America on track to meet its goals, but it must not be the only action congress takes to combat the climate crisis, said congresswoman Kathy Castor, a Florida Democrat and chair of the House select committee on the climate crisis. More federal action is needed to meet the scale of the emergency, she said.

“Even if we pass the Build Back Better Act as it is, that doesn’t get us to net-zero by 2050, which is the goal,” she said in an interview. Pointing to the latest climate research and a report by the Intergovernmental Panel on Climate Change that declared a “code red” for humanity, she added: “We are going to have to do more.”

While Biden can do little about the machinations of the Senate, the president has come under growing criticism that his own actions have not matched his rhetoric. Biden, who has said that the “nation and the world are in peril” from a “code red” climate emergency, has reincorporated the United States to the Paris climate agreement and sought to restore some of the environmental rules axed by Donald Trump.

But his administration has also approved a flurry of new oil and gas drilling permits on public lands, urged oil-producing countries to ramp up production to help lower gasoline prices and declined to stop major fossil fuel projects such as Line 3, an oil pipeline expansion in Minnesota that has sparked violent clashes between police and those protesting against its construction. “I think [the administration] has missed an enormous opportunity to join the battle against those behind the problem—the fossil fuel industry,” said Whitehouse.

Simmering resentment at the president exploded outside the White House last week, with four consecutive days of protests resulting in nearly 300 climate activists being arrested and removed by police. On Thursday, a banner was unfurled reading “We need real solutions, not false promises”, with protesters calling on Biden to declare a climate emergency and halt a slew of proposed pipelines and drilling projects—a report released by Oil Change International has found that 21 major fossil fuel projects under review by the administration would cause the emissions equivalent of 316 new coal-fired power plants if they went ahead.

“We felt we had someone who had our back and then he [Biden] wavered,” said Joye Braun, a campaigner at the Indigenous Environmental Network who traveled from South Dakota for the protests. “He made a lot of promises to us, as Indigenous people, that he’s not following through on. To allow something like Line 3 makes no damn sense.”

“Unless we have greater progress on CO2 cuts we are faced with a miserable outcome…A world above 2 degrees Celsius is not a pretty one.”

Climate scientists have echoed the need for urgency. The world is on course for nearly 3 degrees Celsius of heating by the end of the century, which would bring punishing impacts to people around the globe. Precipitously steep emissions cuts need to occur immediately to avoid this turmoil, scientists say.

“Unless we have greater progress on CO2 cuts we are faced with a miserable outcome,” said Drew Shindell, a climate scientist at Duke University. “A world above 2 degrees Celsius is not a pretty one. This reconciliation bill isn’t enough and it’s discouraging to see the Biden administration still approving fossil fuel projects. That should be very much in our past.”

In recent days, the White House and Democrats have sought to temper expectations that Democrats would reach a deal before the summit—and that a failure to meet their deadline would hurt Biden’s credibility as a global leader in the fight against climate change.

“None of our objectives for the president’s climate agenda begins or ends on November 1 and 2, or the week after,” White House press secretary Jen Psaki told reporters last week. “Whether our agenda has passed or not is not going to be the defining factor.”

The stars may not be aligned long to address climate breakdown. Democrats, having waited a decade for this opportunity, could lose control of Congress in midterm elections next year to a Republican party still unwilling to confront, or even acknowledge, the crisis. The prospect of not acting for another decade is almost unthinkable. “We can’t fail again,” said Whitehouse. “We just can’t.”