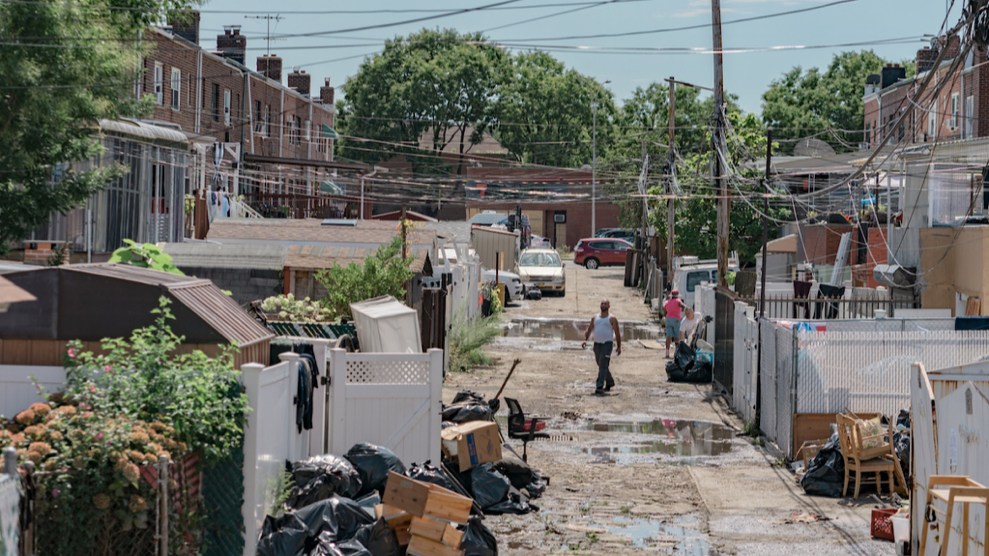 When Hurricane Ida hit New York City on September 16, it dumped more than three inches of rain an hour. Sewers overflowed, streets turned into rivers, and thousands of homes and basements across the city’s five boroughs flooded. Assemblymember Jessica González-Rojas saw the devastation firsthand when she toured her constituent neighborhoods of Corona, East Elmhurst, Jackson Heights, and Woodside in Queens. Family after family, mostly low-income immigrants, told her they’d lost almost all of their possessions in the storm. But as González-Rojas encouraged residents to seek help from the Federal Emergency Management Agency, or FEMA, she learned that those who were undocumented were ineligible for aid.

Other elected officials, including state representative Catalina Cruz and city council member Darma Diaz​​, discovered the same thing. Cruz’s office fielded dozens of phone calls from undocumented immigrants struggling to recover from the flooding, with no place to turn for help. As pressure mounted, Governor Kathy Hochul and Mayor Bill de Blasio announced a $27 million fund to help undocumented survivors of Ida in the city—the first initiative of its kind in the country. The fund will provide up to $72,000 to about 1,200 households with undocumented members to pay for things like repairing homes and replacing essential items.

“We have been fighting for this kind of disaster relief in our communities,” said Lucas Zucker, policy and communications director at the Central Coast Alliance United for a Sustainable Economy, or CAUSE, in California. “The fact that New York is taking this step is historic.”

Despite the growing impacts of climate-related disasters from coast to coast, the New York program is the first time a state or the federal government has invested in supporting undocumented immigrants after a disaster. This reality has left millions of people across the US in a state of “hyper-marginalization,” explains Michael Méndez, an environmental justice and public health researcher at the University of California, Irvine. “The ways that we have set up our disaster infrastructure—at the federal, state, and local levels—are rendering invisible undocumented migrants because of cultural and racial norms of who is considered a worthy disaster victim.”

An estimated 10 million people live in the US without legal authorization, according to the Pew Research Center. Most of them—around 61 percent—are concentrated in fewer than 20 metro areas located in some of the most vulnerable states to climate change, places like New York City, Miami, and Houston. Research has found that low-income, racial, and ethnic minorities, as well as the elderly, renters, non-native English speakers, and those with mobility challenges, are disproportionately affected by flooding. The legacy of racist urban planning practices like redlining also relegated Black, Latino, and other racial and ethnic minorities to flooding-prone neighborhoods in some major metro areas.

“One of the biggest barriers to climate resilience in our society is that millions of people in this country are almost completely excluded.”

In the best-case scenarios, local authorities are jumping through hoops trying to help undocumented immigrants access federal aid only authorized for US citizens or those with immigration papers, said Katy Atkiss, disaster equity manager at Houston Immigration Legal Services Collaborative, or HILSC. In the worst, they’re simply doing nothing.

“One of the biggest barriers to climate resilience in our society is that millions of people in this country are almost completely excluded from the safety net due to their immigration status,” Zucker said.

Typically, after a disaster strikes, the federal government sets up a network of programs to support survivors: Homeowners who don’t have insurance or are underinsured can ask FEMA for funds to repair their houses. The U.S. Department of Housing and Urban Development, or HUD, provides federally backed insurance and loans to cities, counties, and states to meet recovery needs in low-income communities. Families can apply for supplemental, short-term food stamps, as well as disaster unemployment assistance for up to 26 weeks. States can also tunnel federal funds from other programs to support survivors.

In theory, families with undocumented residents that have one or more U.S. citizens can apply for federal help. But many in this position are wary of asking for aid. FEMA is under the Department of Homeland Security, and its forms state that other Homeland Security agencies—including Immigration and Customs Enforcement, or ICE, in charge of deportations—could access the information, explained Mendez. Additionally, if the undocumented members eventually become eligible for citizenship, receiving federal funds while undocumented can play against them during their application. As a result, Mendez said, they avoid applying for disaster aid.

Unauthorized immigrants often find themselves particularly vulnerable even before disaster strikes. During the Thomas Fire, Mendez found, immigrants from different Mixtec Indigenous communities living in Southern California were unable to read the English and Spanish evacuation orders and recommendations.

In some cases, their migratory status keeps people away from shelters out of fear of being asked for ID, said Cesar Espinoza, executive director at FIEL, a grassroots group working in the greater Houston area. Espinoza recalls that when Hurricane Harvey hit Texas in 2017, Department of Homeland Security trucks were parked outside of the largest shelter in Houston to help secure the building. Many undocumented immigrants didn’t go because they were afraid of being asked for their papers. “They wondered, ‘Are we going to be safe there?’” he said.  “So a lot of people were in eight, nine feet of water” during the disaster.

The unavailability of federal funds has left many nonprofits as the only sources of assistance for unauthorized immigrants in the wake of natural disasters. But these too are often hard for the undocumented community to access. In the aftermath of Harvey, many undocumented people in Texas not only lost their homes, they lost their cars and work-related tools as well, particularly those who worked in construction, Espinoza said. When they reached out to non-governmental organizations for help—those that didn’t exclude unauthorized residents from their funds—the fact that they couldn’t prove their identity, didn’t have proof of income, or didn’t have a bank account for the electronic transfer left them ineligible for support. So FIEL raised $300,000 that they distributed hand-to-hand in the community.

In California, these organizations have struggled to deploy the infrastructure needed to assist so many people after fires, said Zucker. After the Sonoma Complex Fire scorched 87,000 acres of Sonoma County in 2017, the grassroots organization Community Foundation Sonoma County launched the first private disaster relief fund in the United States specifically for undocumented migrants. Others followed: After the Thomas Fire, the Ventura County Community Foundation raised $2 million to assist more than 1,400 families who were impacted by both the fire and the mudslides that followed.

Yet it soon became obvious that the needs exceeded the organizations’ capabilities. “Our waiting list was over 1,000 families long for months and months and months. People were lining up out the doors early in the morning. Our cellphones were just ringing off the hook. It took us over a year to get the relief for a lot of those families,” Zucker said. “As proud as I am of everything we’ve done, it does not make up for the lack of support and policy.”

Things remained pretty much the same until last year when COVID-19 hit. Low-income people—with or without documents—were disproportionately suffering from the virus. “[The pandemic] really accelerated our learning and evolved how we’re dealing with disaster preparedness, response, and recovery,” Atkiss, of the Houston Immigration Legal Services Collaborative, said.

In early 2020, California, Oregon, and several cities and counties, including New York City and Harris County, Texas, launched funds for those who lost their jobs because of the pandemic, including undocumented immigrants. But it was Washington’s $40 million in COVID-19 relief funds that changed the game, Atkiss said. Besides state dollars, Washington used money from the federal Coronavirus Aid, Relief, and Economic Security Act, or the CARES Act. The state took advantage of a loophole in 1996 welfare reform, which limits cash help to authorized immigrants—except for one-time emergency disaster relief. Washington leaders argued that since COVID-19 is an emergency, they were allowed to give undocumented immigrants a one-time disaster relief payment, explained Atkiss.

“Other places have used that loophole but not been so brazen about it for fear of lawsuits,” she said. “And as far as I know, Washington was not sued.” Now, she and other advocate groups in Texas are working to convince Harris County leaders to use the same legal argument to extend the eligibility of one of the county’s COVID-19 relief funds, which also uses federal dollars. A similar push is taking place in Iowa.

Advocates believe the “one-time emergency” framework used during the pandemic opens the door for exploring similar strategies for natural disaster aid. “Whether it’s a fire, whether it’s COVID, whatever kind of crisis comes, when you’re excluded from the safety net, you have nothing to put a roof over your kid’s head and food on the plate,” Zucker said. “That is a truly horrific and immoral thing.”