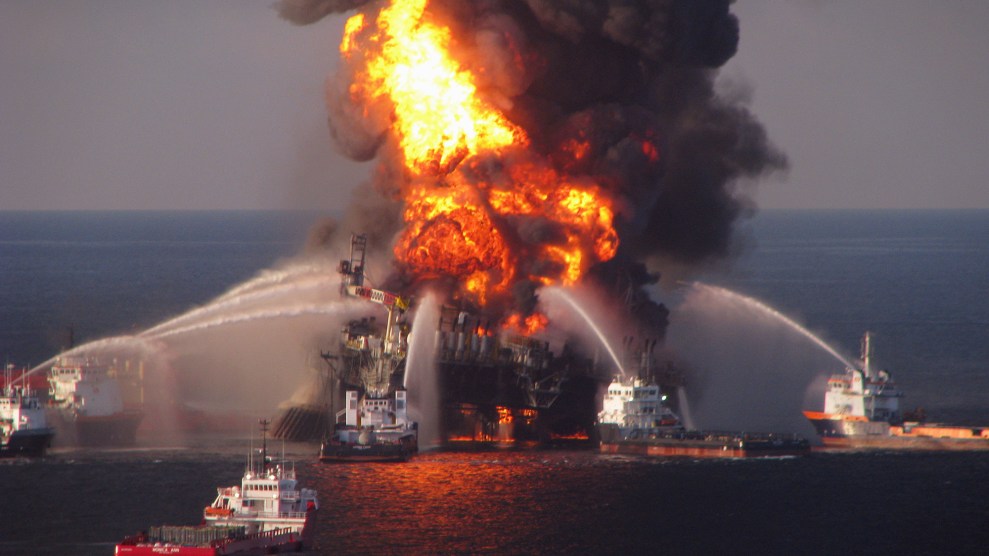 Fire crews respond to the BP Deepwater Horizon disaster in the Gulf of Mexico, April 21, 2010. US Coast Guard photo/AP

The Biden administration admitted that a court decision did not compel it to lease vast tracts of the Gulf of Mexico for oil and gas drilling, shortly before claiming it was legally obliged to do so when announcing the sell-off, the Guardian can reveal.

Last month, the US government held the largest-ever auction of oil and gas drilling leases in the Gulf of Mexico’s history, offering up more than 80 million acres of the gulf’s seabed for fossil fuel extraction.

The president’s administration insisted it was obliged to hold the lease sale due to a court ruling in favor of a dozen states that sued to lift a blanket pause placed on new drilling permits by Biden. But a memo filed by the US Department of Justice before the lease sale acknowledges that this judgement does not force the government to auction off drilling rights to the gulf.

“While the order enjoins and restrains (the department of) interior from implementing the pause, it does not compel interior to take the actions specified by plaintiffs, let alone on the urgent timeline specified in plaintiffs’ contempt motion,” wrote government lawyers to the federal court in Louisiana in August.

“If the administration was taking the climate crisis seriously they would be fighting tooth and nail to keep every molecule of fossil fuel in the ground.”

The issuance of new drilling permits would require further steps under federal laws, the memo states, adding that “the court’s order does not compel the agency to act in contravention of these other authorities.” The memo’s language was first referenced by The Daily Poster.

Just a month after arguing that it was not required to hold the sale, however, the Department of the Interior’s Bureau of Ocean Energy Management (BOEM) announced it would auction off an area of the gulf that is two times the size of Florida to oil and gas companies.

The expanse of the gulf put up for auction contains around 1.12 billion barrels of oil and 4.2 trillion cubic ft of gas, with the leases locking in years—and potentially decades—of planet-heating emissions. It comes at a time when the International Energy Agency has said no new fossil fuel projects can be established after this year if the world is to avoid catastrophic heatwaves, flooding and other disastrous impacts from runaway climate change.

“We know this will exacerbate the climate crisis, it undermines US credibility abroad and it contradicts a campaign promise by Biden. If the administration was taking the climate crisis seriously they would be fighting tooth and nail to keep every molecule of fossil fuel in the ground. They are nowhere near to doing that.”

The auction, held on November 17, ended up netting the government $191.6 million from companies such as ExxonMobil, Chevron, and BP, the company responsible for the Deepwater Horizon disaster in 2010. A total of 308 tracts of the gulf’s seabed were sold off, covering 1.7 million acres, an area larger than the state of Delaware.

The rapid staging of the lease sale was not required by the courts and could have instead been delayed by a proper federal review of climate and other environmental impacts according to Earthjustice, an environmental group that is suing to halt the leases before they come into effect in February.

“We have no good answer as to why they are doing this. It’s problematic and disappointing.”

“Interior had a lot of discretion over whether to hold this lease sale and they chose to do it anyway,” said Brettny Hardy, a senior attorney at Earthjustice. “The Biden administration is talking about a climate crisis and getting to net-zero emissions and then it makes decisions like this that lock us into impacts for decades to come. These leases could potentially be producing oil 50 years from now. We have no good answer as to why they are doing this. It’s problematic and disappointing.”

A spokesperson for the Department of the Interior said that it was “complying with a US district court’s decision” in going ahead with the leases. He did not answer questions over why the government said in August that this court decision does not compel the auction.

The decision to go ahead with the sale has damaged Biden’s climate credentials after the Cop26 talks in Glasgow where he said the US would “lead by example” in slashing greenhouse gas emissions. The president, who has called the climate crisis an “existential threat” to the US, said in a Democratic primary debate last year that under his administration there would be “no more drilling, including offshore. No ability for the oil industry to continue to drill, period, ends, number one.”

This jarring contradiction has alarmed even some of Biden’s closest allies, with three Democratic members of Congress filing a brief last week with the federal court calling for a halt to the gulf lease sales. The three admitted that they are “deeply concerned” and “shocked” that the government is pushing ahead with the drilling “despite its own findings that the largest lease sale in history has not had an adequate environmental review.”

“This is not going to help with Democratic turnout next year…There is a core constituency of young people and people who care about climate change.”

Biden has set a target for the US to reach net-zero emissions by 2050 and the use of the huge amount of land and ocean overseen by the federal government is seen as critical to this goal. The production and consumption of fossil fuels on federal land causes about a quarter of all American greenhouse gas emissions and a president has broad unilateral powers to limit or expand oil, gas and coal development.

The Biden administration’s apparent reluctance to aggressively wield this authority may cost it politically, as well as worsen the climate crisis, ahead of midterm elections next year. “This is not going to help with Democratic turnout next year,” said Meyer. “There is a core constituency of young people and people who care about climate change who are upset and feeling betrayed by the Biden administration.”

Some commentators have pointed to Biden’s need to appease senator Joe Manchin, a fossil fuel–friendly centrist Democrat who is a crucial vote for the president’s Build Back Better spending bill, as a reason for the drilling.

“If it is political, that is unfortunate because the climate doesn’t really care about politics,” said Hardy. “Climate change will continue to cause problems for the whole nation if we don’t address it.”