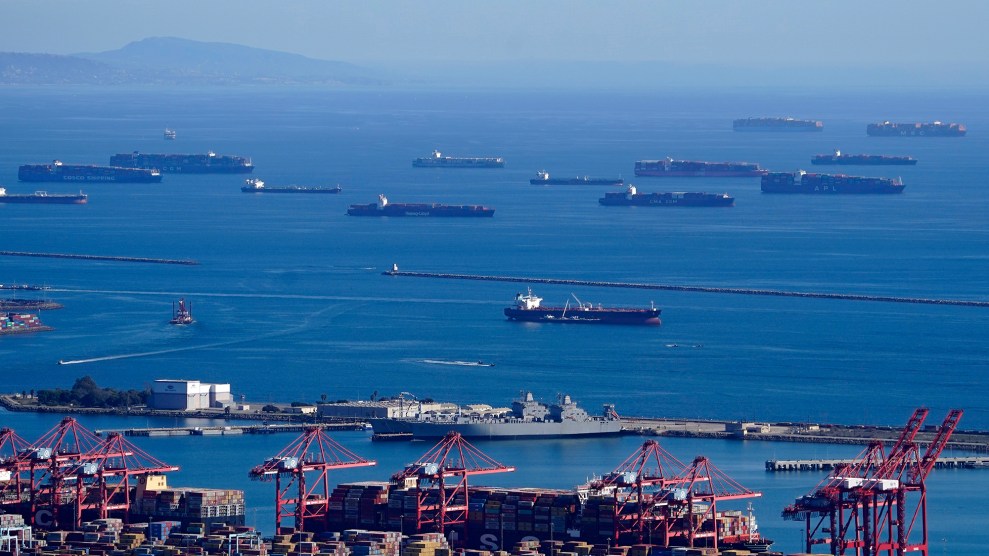 Cargo ships line up for unloading outside the Port of Los Angeles, February 2021.Mark J. Terrill/AP

The 34-year-old West Long Beach native and environmental activist struggles to describe the acrid scent of exhaust fumes before concluding it smells like “port.” Lately, he says, “you can see puffs of black smoke coming from the ships constantly. All that stuff is getting into our air.”

In recent months, a record-breaking backlog of ships idling just miles from Chavez’ doorstep has released as much particulate matter as 50,000 diesel trucks each day, according to state regulators.  Long Beach neighbors the two busiest ports in the United States, the Port of Los Angeles and the Port of Long Beach. Just four miles apart, they field a combined 40 percent of containers that enter the country.

Daily emissions from the ports exceed those of the region’s six million cars, state regulators say.

Despite successful efforts to reduce shipping emissions in recent years, these ports are still the largest fixed source of pollution in Southern California. Daily emissions exceed those of the region’s six million cars, according to state regulators. And that’s during normal operations, without scores of ships idling offshore.

Pandemic-related supply chain issues have slowed the flow of goods into American homes, even as the ports move to speed up operations. For many, that means delays on holiday gifts, but for locals like Chavez, who was diagnosed with asthma as a child and now works for the Coalition for Clean Air, the excessive pollution related to shipping and trucking congestion at the ports raises concerns about his health, and that of his community.

West Long Beach is an industrial, working-class and largely Latino section of Long Beach, a city of nearly half a million people that stretches across the southern border of Los Angeles County.

California officials have found it has some of the highest concentrations of diesel pollution in the state, and elevated concentrations of PM2.5—a class of particulate matter linked to cardiovascular and respiratory diseases, including lung cancer.

Black Long Beach residents were hospitalized with asthma at eight times the rate of white residents.

Adults in Long Beach are hospitalized with asthma at a rate about 35 percent higher than in the rest of California, according to a 2019 community health survey. In one zip code close to the ports, the rate of adult asthma-related emergency room visits is twice the state average. The city’s Black and Brown residents in particular bear the brunt. According to the survey, Black Long Beach residents were hospitalized with asthma at eight times the rate, and Latinos at twice the rate, of white residents.

Nationwide, the burdens of air pollution disproportionately hurt the poor and communities of color, several studies have shown. A 2019 study from the Union of Concerned Scientists found that in California, Black people were exposed to 43 percent more PM2.5, and Latinos 39 percent more, than white residents were.

That exposure can translate to serious health complications—about 200,000 Americans die early every year due to air pollution, according to research published by JAMA Open Network. Edward Avol, a professor of clinical preventive medicine at the University of Southern California, says air pollution has also been linked to kidney, liver, and nervous system problems. In children, it can slow or prevent lung development.  Excessive exposure “can have lifelong consequences,” he says. “And we’re particularly concerned about those effects in children because they have such a long trajectory of life ahead of them—we hope.”

Chavez still remembers the fear he experienced when he began struggling to breathe as a kid. Growing up, he assumed asthma diagnoses were something that “just happened” since it was so common among his peers.

Jan Victor Andasan, 31, is another Westside resident who was diagnosed with asthma growing up, as was their younger brother. Today, Andasan, who uses they/them pronouns, is an organizer with East Yard Communities for Environmental Justice. They said these health disparities played out to deadly effect as Covid-19 swept through the community.

“We’ve had folks pass on because our bodies were already damaged and deteriorated as a result of various types of pollution.”

Zip codes in West Long Beach saw the city’s highest death rates, which local health officials attributed to the area’s relative density, poverty, large household size, and high number of “essential” workers—including port workers. “We’ve had folks pass on because our bodies were already damaged and deteriorated as a result of various types of pollution—and one of those sites [of pollution] is the port,” Andasan told me.

Both the Port of Los Angeles and the Port of Long Beach have taken steps to clean up their acts over the past 15 years. As part of a clean-air plan, they have offered incentives for ships to use newer, cleaner engines, and have begun phasing out fossil fuels by upgrading to electric-powered equipment.

Despite an increase in ships, the ports have been able to reduce emissions significantly. In October, the Port of Long Beach announced it had reached its 2023 emission-reduction goals three years early, decreasing nitrogen oxide output by more than 60 percent.  But the recent supply chain bottleneck is “negatively affecting these gains,” says Phillip Sanfield, a spokesperson for the Port of Los Angeles.

“We can’t draw an exact line to say that if [pollution] goes up this much today, tomorrow somebody is going to be sick,” notes Avol, the USC professor. But there is little doubt about the correlation between higher levels of pollutants and more health problems, he says.

As a short-term solution to reduce coastal emissions, the ports recently adopted a new queue system that requires ships to wait farther offshore, Sanfield says. Looking forward, Gov. Gavin Newsom has pledged to take an “aggressive” approach in demanding more federal funding to improve port infrastructure. The state has also entered into a partnership with the US Department of Transportation to fund port projects that “address equity and environmental justice.”

Chavez sees the current crisis as an opportunity to think about greening the local economy. “This constant push and pull that you see between this notion of do we have clean air or do we have a strong economy—it’s a false narrative,” he says. “If we invest in our communities and we invest in clean technologies, and actively work on deploying these technologies, it’s going to create jobs.”

Andasan hopes all recent media focus on the ports will bring more attention to the needs and demands of communities that shoulder the toxic burden. “As an organizer, when I sit in with officials, they tell us the economics of [the issue],” he explains. “This isn’t about money for us. This is about us wanting to live the best quality life.”