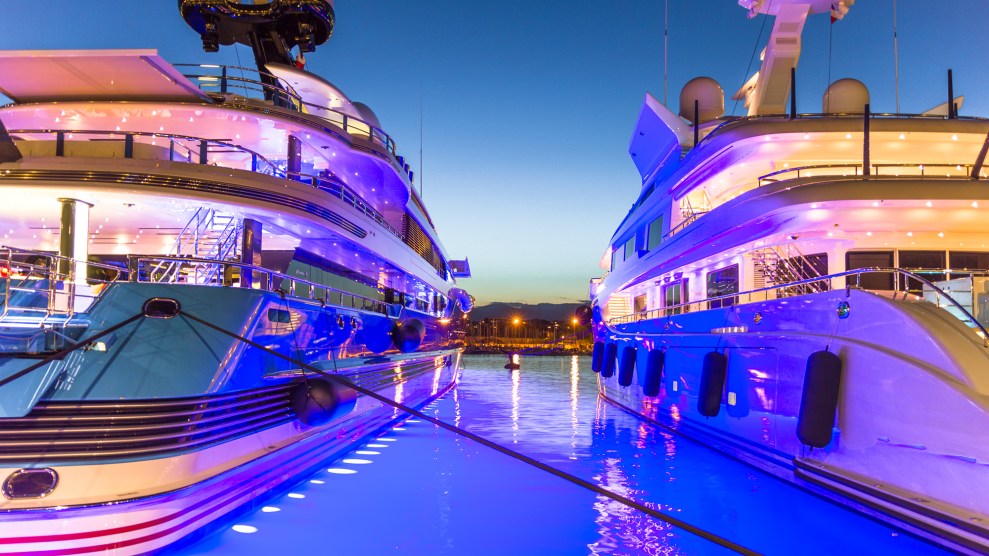 Port of Antibes on the French Riviera.Getty Images

In an era of environmental awareness and conspicuous displays of sustainability, you might not expect a rise in the number of people with the means and appetite for a $60 million floating fortress of solitude.

But, in part because of the coronavirus crisis, the superyacht industry is booming—and the number of vessels under construction or on order worldwide has hit a new record. According to figures revealed in the latest edition of Boat International’s Global Order Book, more than 1,200 superyachts are slated to be built—a rise of 25 percent on last year.

“In previous eras the people with enough money were too busy in the office to justify the purchase; these days they can work from anywhere.”

“The market’s never been busier,” said Will Christie, a superyacht broker. “And I’ve been in the industry 20 years. A lot of people say they appreciate the safety of being on a yacht during the pandemic. But it’s also because whereas in previous eras the people with enough money were too busy in the office to justify the purchase, these days they can work from anywhere.

“I had one client who sent his trading terminals by plane so he could use them onboard—he’d be kitesurfing in the afternoon and then go back to his desk.”

Christie said shipyard order books were typically full until 2025—meaning clients are prepared to pay a premium to take over someone else’s slot if it can be delivered years earlier. He argued that the ability to transport a holiday home to a different location at a moment’s notice was deeply appealing.

“Everybody just wants freedom, and ultra-high-net-worth individuals can afford it,” he added. “The ability to escape anywhere is very attractive in the current climate. They think: I don’t need to be stuck in the office, and if you’re worth billions, why should you be?”

Critics of the boom in superyachts point to the vastly disproportionate environmental damage produced by the super-rich. “Whether it’s this or private jets or trips to space, they’re just sticking two fingers up at the rest of society,” said Peter Newell, a professor of international relations at Sussex University. “It’s decadent. They’re not comfortable with the constraints that come with accepting collective responsibility for the fate of the planet.”

Newell, the lead author of a Rapid Transition Alliance report which called for policymakers to target the “polluter elite” to limit their carbon consumption, said industry claims of moves to a more sustainable model were unconvincing. He called for government action. “You can’t just rely on people’s empathy—it has to be tax and regulation,” he said. “But it is very, very hard with a mobile elite that can move its money and its property around.”

Of the 1,200 superyachts on order or under construction, 27 would be more than 100 meters (109 yards) long, the Global Order Book said. The REV Ocean, being built by the Norwegian billionaire Kjell Inge Røkke, will measure 183 meters, making it the biggest in the world. It features a “moon pool” through which a submarine will be deployed for ocean research.

Some of the more eye-watering features of existing superyachts include helicopter landing pads, open-air cinemas, and—in the case of the UFC fighter Conor McGregor—a “jousting platform.”

The economic anthropologist Richard Wilk, a distinguished professor at Indiana University, said: “Of course, if you add every superyacht together, it’s just a blip on total greenhouse gas production. But it is symbolic—and the global impact of the 2,000-odd billionaires on the planet are very significant. So it’s part of a pattern of overconsumption by the upper crust.”

In research with his colleague Beatriz Barros, he found that the average billionaire had a carbon footprint thousands of times that of the average person. The global average footprint of CO2 emitted per person is just under five tons, while they estimated that Roman Abramovich—the top polluter according to their list—was responsible for about 33,859 tons of carbon emitted in 2018. More than two-thirds of that was the product of his yacht, the 162.5-meter Eclipse.

“Whether it’s this or private jets or trips to space, they’re just sticking two fingers up at the rest of society.”

As well as fuel when the vessel is in use, Wilk said, “even when [the owners] are not onboard, they usually have a substantial permanent crew there, using all kinds of relatively inefficient systems. They might call the captain and ask him to take the yacht from the Mediterranean to the Caribbean to meet them. So you can greenwash it, but it doesn’t make much difference.”

Sympathy for superyacht owners may not have been enhanced by a recent intervention from Australia’s richest woman, the mining magnate Gina Rinehart. In a video recorded from the deck of her own vessel in front of an emerald sea, she complained that there were not enough spaces to dock superyachts in Queensland.

“For instance, we’ve just experienced days of very rough water from the southern Queensland border to the Capricorn Coast,” she said. “Then, when we arrived at the coast not feeling that great after two very rough sleepless nights and a rough day, many yachts were outside the marinas, given the lack of marinas.”

Queensland might suffer because overseas superyacht owners would be less likely to visit, she added. “These superyachts need marinas too—sadly lacking for vessels over 50 meters. It’s time for more marinas large enough to cater not only for small and medium yachts, but larger ones too.”