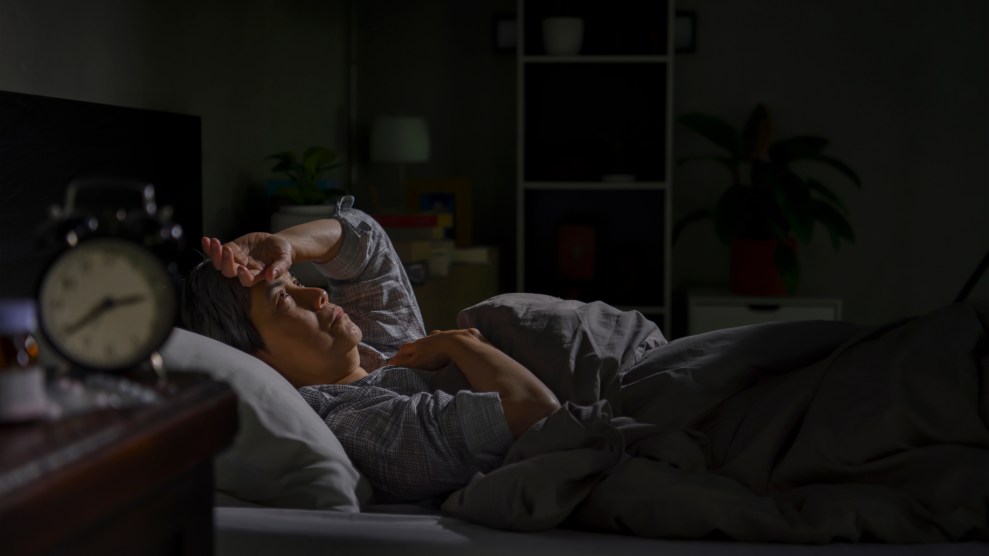 Rising temperatures driven by the climate crisis are cutting the sleep of people across the world, the largest study to date has found.

Good sleep is critical to health and wellbeing. But global heating is increasing night-time temperatures, even faster than in the day, making it harder to sleep. The analysis revealed that the average global citizen is already losing 44 hours of sleep a year, leading to 11 nights with less than seven hours’ sleep, a standard benchmark of sufficient sleep.

Lost sleep will increase further as the planet continues to heat but it affects some groups much more than others. The sleep loss per degree of warming is about a quarter higher for women than men, twice as high for those over 65 years old and three times higher for those in less affluent nations. The researchers used data from sleep-tracking wristbands used by 47,000 people over 7 million nights and across 68 countries.

Previous studies have shown that rising temperatures damage health, including increased heart attacks, suicides and mental health crises, and accidents and injuries, as well as reducing the ability to work.

Poor sleep has also been shown to have these effects and the researchers said their study suggests that disturbed sleep may be a key mechanism by which heat causes these health impacts. Worryingly, the researchers said, their data showed no signs of people being able to adapt to hotter nights.

“For most of us, sleep is a very familiar part of our daily routine; we spend nearly a third of our lives asleep,” said Kelton Minor, at the University of Copenhagen, Denmark, and who led the research. “But growing numbers of people in many countries around the world do not sleep enough.”

“In this study, we provide the first planetary-scale evidence that warmer than average temperatures erode human sleep,” he said. “It might actually be the tip of the iceberg, because it’s very likely our estimates are conservative.”

Minor said sleep reduced by warmer nights is affecting huge populations. For example, he said, a night above 25C (77F) in a city of a million people would result in 46,000 extra people suffering from shorter sleep. “And if you look at the heatwave that’s transpiring right now in India and Pakistan, we’re talking about billions of individuals exposed to conditions expected to result in considerable sleep loss,” Minor said.

The study, published in the journal One Earth, analyzed sleep and outdoor weather data collected from 2015 to 2017 and found that higher temperatures reduced sleep by delaying its onset. People’s bodies need to cool every night as they fall asleep, but this is harder when it is warmer.

Women may be affected more because their bodies usually cool faster than men’s when going to sleep. Women also have higher levels of subcutaneous fat on average, making cooling slower. Older people are known to sleep less at night and have poorer body temperature regulation, which may explain their susceptibility. People in poorer nations could lose more sleep as they have less access to cooling features such as window shutters, fans and air conditioning.

The researchers found the impact of warmer nights on sleep was seen in all countries, whether they had naturally cooler or warmer climates, with the impact clear when night-time temperatures rose above 10C (50F).

“Worryingly, we also found evidence that people already living in warmer climates experienced greater sleep erosion per degree of temperature rise,” said Minor. “We had expected those individuals to be better adapted.” Furthermore, people did not catch up on missed sleep at later times, according to the data.

Minor said the research had important implications for policymakers, who needed to ensure cities, towns and buildings were well adapted to heat in order to reduce the health impacts of rising temperatures. The UK government’s official advisers warned in 2021 that it was failing to protect people from the fast-rising risks of the climate crisis, particularly heatwaves.

The data used in the study came mainly from richer nations, although it included some from India, China, Colombia, and South Africa. The wristbands also tended to be worn by people less prone to sleep disturbance by warmer temperatures, such as middle-aged, wealthier men.

“Lower-income people are underrepresented in the data and we’re very transparent about that,” said Minor. He said further research was needed, particularly in places that already ranked as among the hottest in the world, such as large parts of Africa, Central America, and the Middle East. The research was unable to assess sleep quality, such as the different phases of sleep, but there was no change in the number of times people woke in the night.

Minor said the path the world chose in terms of how hot the planet got would have consequences for everyone’s slumber. “Our decisions, collectively as societies, will have costs in terms of sleep.”