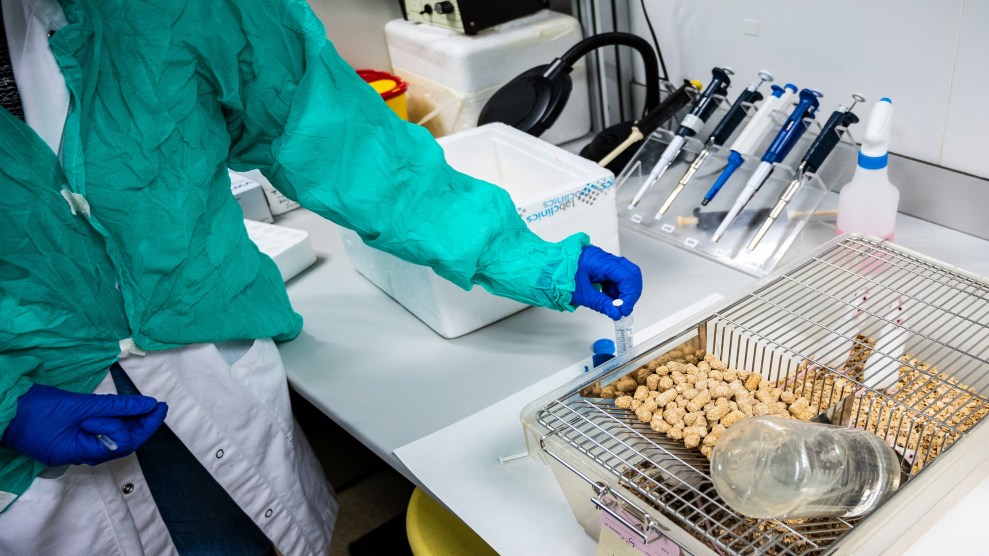 A researcher preparing to perform an intraperitoneal injection on mice.Marcos del Mazo/LightRocket/Getty

Animal testing has long been necessary for a drug to gain approval by the US Food and Drug Administration—but it may be on its way out. A new law seeks to replace some lab animal use with high-tech alternatives.

The FDA Modernization Act 2.0, signed by President Biden at the end of December with widespread bipartisan support, ends a 1938 federal mandate that experimental drugs must be tested on animals before they are used in human clinical trials. While the law doesn’t ban animal testing, it allows drugmakers to use other methods, such as microfluidic chips and miniature tissue models, which use human cells to mimic certain organ functions and structures.

“We have many important drugs that have been developed using animal tests. But as we get into some of these more difficult diseases, especially neurological diseases, the animal models just aren’t serving us as well,” says Paul Locke, a scientist and lawyer at Johns Hopkins University who studies alternatives to animal testing. “We need new ways to really unlock the molecular mechanisms that are causing these diseases, and the alternatives I think hold great promise.”

Locke and other advocates point to studies that have shown animal testing to be an unreliable predictor of toxicity in humans. And plenty of drugs work in mice but aren’t effective in people. An estimated 90 percent of drug candidates in clinical trials never reach the market, and drugs that target the brain typically have an even higher failure rate. These inconsistencies, combined with the time, expense, and ethical issues associated with using animals, have led scientists to develop alternative testing methods that aim to better recapitulate human physiology.

These include microfluidic organs-on-chips—clear, flexible polymer gadgets about the size of a computer memory stick that contain different kinds of human cells and push fluid through tiny channels to mimic blood flow. The first successful chip containing living human cells, a lung model, was described in 2010 by Donald Ingber and his team at Harvard University’s Wyss Institute. The miniaturized device was able to carry out basic functions of the lung, including exchanging oxygen and carbon dioxide. Researchers at the Wyss Institute and elsewhere have gone on to create chips that simulate the liver, stomach and intestine, brain, skin, and more, using them to test the effects of drugs and environmental toxins.

Then there are organoids—tiny, three-dimensional blobs of tissue grown in the lab. In 2008, Japanese biologist Yoshiki Sasai showed that, under the right conditions, it is possible to transform stem cells into neural tissue in a dish. By feeding cells certain nutrients and genetic instructions, scientists can coax them to self-organize into structures that resemble miniature organs and contain several cell types.

Though no bigger than a pea, these models have some of the characteristics of full-size hearts and brains, and because they’re grown in a lab dish, they provide scientists with a detailed window into how organs form and develop. They’ve also been shown to predict patient responses to certain drugs, including cystic fibrosis medications and chemotherapy.

Computer models that use artificial intelligence and machine learning trained on human data could also provide fast and cheap alternatives to animal testing. One 2018 study from the University of Oxford found that a computer simulation representing human heart cells outperformed animal tests in predicting adverse effects among cardiac drugs.

Moving away from animal testing has been a priority for researchers for some time.

Previously, the US government required that all investigational drugs be tested on animals before they could progress to initial trials in humans. But the new law allows drug developers to submit safety and efficacy data from sources other than animals.

This doesn’t mean it will be easier to get drugs approved, says Aysha Akhtar, a neurologist and president and CEO of the Center for Contemporary Sciences, a Washington, DC, nonprofit that advocates for human-based testing methods. “The decision is still up to the FDA to decide whether the method was adequate and whether to allow the drug to continue through the pipeline.”

Akhtar thinks the measures could eventually cut the cost of developing drugs by reducing reliance on animal testing, but she doesn’t think the effect will be instant. “What I suspect we’re going to see is these other testing methods being used and being incorporated more and more into new drug applications to the FDA. They may not be in place of animal testing just yet, but they will be added in addition to the animal test results,” she says.

A reduction in lab animal use may be hard to measure, because no one knows exactly how many are used in the US every year. A 2021 study calculated that annual figure at more than 111 million mice and rats, which make up the vast majority of lab animals. But that study was criticized for extrapolating national numbers from a handful of institutions. Other estimates are much lower. For instance, Speaking of Research, an organization that advocates for the use of lab animals, puts the total—including rodents, primates, dogs, guinea pigs, and rabbits—around 12 million to 24 million per year.

Moving away from animal testing has been a priority for researchers for some time. Although animal experiments have been used since at least the sixth century BC, when physicians in Ancient Greece performed surgeries called “vivisections” on living animals to better understand anatomy, they’ve come under increasing scrutiny. In 2021, the European Union Parliament voted to phase out animal testing.

Research on nonhuman primates, including monkeys and baboons, is particularly controversial because of the animals’ advanced cognitive abilities. Primates are often considered the “gold standard” animal models for drug development because they are biologically and anatomically similar to people. But in the US, they make up less than 1 percent of research animals, and only a handful of primate research centers exist.

The US has phased out research on chimpanzees, humans’ closest genetic relatives. In 2013, the National Institutes of Health announced that it would significantly reduce government-supported research on chimps, following recommendations from an advisory committee. The agency initially planned to retain a colony of 50 animals for research but in 2015 announced that it would end chimp research altogether and retire them to sanctuaries.

The Covid-19 crisis highlighted certain economic and welfare issues associated with using animals for research. Pandemic-related closures meant that many labs had to halt experiments and euthanize animals. Then the race to develop vaccines and treatments for Covid-19 meant monkeys were in short supply due to huge demand.

While alternative methods are promising, they’re relatively new. Methods for developing organ chips, organoids, and computer models also vary from lab to lab, making it difficult to draw broad conclusions about their accuracy.

“I don’t think the organ-on-chip will do it all. I think we’ll need a battery of different, complementary tests.”

Boston biotech company chip Emulate, cofounded by Ingber, is testing how well its liver-on-a-chip device does at flagging the presence of dangerous chemicals. Lorna Ewart, the company’s chief scientific officer, says liver toxicity is a major reason why clinical drug trials are stopped or products are pulled from the marketplace after approval. Animal models, she says, may not be accurate predictors of liver toxicities for people, because animals metabolize drugs differently than humans do.

Emulate scientists recently performed a blind test on the company’s liver chip of 27 drugs, some known to be toxic to the liver and some safe. They found that the chip correctly identified 87 percent of the drugs that cause liver injury in patients and did not falsely identify any drugs as toxic. Ewart says previous animal tests, used as a comparison, did not always predict safety issues. “In some cases, the animal models didn’t fully inform the investigator of the true outcome,” she says. The study was published in the journal Nature Communications in December.

But organs-on-chips have their limitations. For one, they’re not ideal for testing some kinds of drugs and compounds, particularly those with a low molecular weight, which tend to absorb into the rubber polymer channels of the chip. Ewart says that’s a problem, because if the drug is caught in the plastic and not actually exposed to the cells within, it will skew the test results. And organs-on-chips often require special instrumentation to conduct testing and read out data.

“I don’t think the organ-on-chip will do it all. I think we’ll need a battery of different, complementary tests,” says Jeffrey Morgan, a professor of engineering and director of the Center for Alternatives to Animals in Testing at Brown University. He says organ chips tend to be better for shorter tests, over a week or two, but longer-term testing is an unmet need. For instance, in some cases the chronic toxicity of a drug or chemical is apparent only after long-term exposure, sometimes at low doses. Good alternative testing methods that replicate this kind of scenario don’t exist, he says.

And while techniques to develop organoids have greatly advanced in recent years, the structures are still relatively simple. They don’t have all the cell types or characteristics of real human organs, which may limit their reliability. Organoids also take months to grow in the lab.

For its part, the FDA will need to thoroughly vet any new methods that are used in place of animals. In an emailed statement, a spokesperson for the agency wrote that the new law does not change the regulatory process for drugs: “The FDA will continue to ensure clinical investigations of drugs are reasonably safe for initial use in humans.” A spending bill passed at the end of 2022 also includes $5 million for an agency program aimed at evaluating alternative methods.

And it may be that different methods are useful for testing different drugs or watching for certain side effects. “They have to be shown to be relevant and reliable and actually predict the endpoints that they’re evaluating,” says Locke. “That’s going to be a scientific challenge, and it’s going to take a while to do that.”