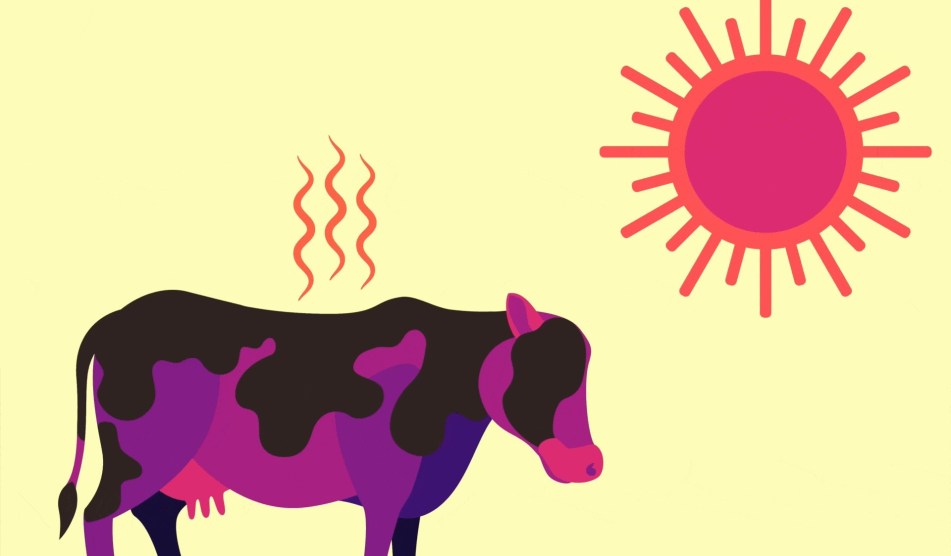 This story was originally published by the Bulletin of the Atomic Scientists and is reproduced here as part of the Climate Desk collaboration.

Last month, during a slow-moving heat wave that smothered much of the United States, the Kansas Department of Health and Environment reported at least 2,000 cattle had died from heat stress. In 2021, as the Pacific Northwest sweltered under a heat dome, more than 650,000 farm animals perished in British Columbia alone. And in 2015, a deadly heat wave in India killed more than 17 million chickens.

Hot, humid conditions can lead to massive heat casualties in animals—in livestock as well as wild animals. These events will become more extensive, longer lasting and more damaging as the world warms, potentially threatening economies and ecosystems. While many studies have demonstrated the impact of individual events or gradual trends in heat stress on livestock, there is a Panglossian tendency among many working in livestock agriculture to believe in a nearly infinite capacity for modern agricultural practices and breeding to overcome heat-stress induced challenges.

Much of the warming that has occurred in places like the United States or Europe can be dealt with through breeding in key traits from variants from warm countries like India or North Africa. But as high heat conditions travel beyond the upper ranges of temperatures recently experienced (over the past few thousand years) in North Africa, India, or South America, there will limited genetic diversity to draw upon to prepare for these conditions. There are temperature ceilings that humans and mammals (and many other animals) cannot survive, if breached. What those limits are, and what happens when they are crossed, will have profound implications for agriculture and biodiversity in a warming world.

In 2010, Steven Sherwood and I published a paper introducing wet-bulb temperature, a measure of moist heat stress, as a way of conceptualizing a 35 degree Celsius upper limit for survivability. Today very small regions cross this threshold for brief intervals. But with every degree of global warming, maximal wet-bulb temperatures will increase by nearly 1 degree Celsius. With enough warming more and more of the world will begin to cross this critical moist heat stress threshold. This critical survivable wet-bulb temperature concept has since spread well beyond its initial scope and its application to human health appears nearly daily in newspapers and even in science fiction.

Unfortunately, this limit was always understood to be an upper limit for perfectly hydrated, perfectly sweating people living in the shade exposed to a strong wind. Real humans do not behave this way all the time, if ever, and the real-world wet-bulb limit is in all likelihood substantially lower.

All mammals—indeed all endotherms, or warm-blooded animals, to a greater or lesser degree—are subject to similar temperature-humidity limits. Much of the best data exists for livestock so extra attention is due there, but moist heat stress is an equal opportunity killer, and the welfare of entire species and ecosystems need to be considered. And unlike many humans or even some livestock animals cared for by humans, wildlife does not have access to technologies like air conditioning to use to adapt to extraordinary temperatures.

When Sherwood and I began work on this topic we were inspired by records of past “greenhouse” climates over the past 90 million years, in which temperatures and humidity were mostly much higher than they are today. At a conference in which I was presenting these paleoclimate records, Sherwood asked, “Given that there is substantial evidence that the world used to be much hotter, is there a thermal limit that applies to all warm-blooded animals which might have been crossed in the past? If so, could it be crossed in the future, causing mass extinctions?”

Birds are a slightly different story. It is now widely understood that birds are avian dinosaurs and are derived from an endothermic avian dinosaur lineage. Their maximum sustainable internal body temperatures are significantly higher (approximately 43 degrees Celsius), likely a necessary legacy of the hot, humid Mesozoic conditions in which they evolved.

The common maximum internal temperature is about 38 degrees Celsius for placental mammals or 43 degrees Celsius for birds, and these are shared across the vast majority of genera and species within these groups, which strongly suggests that these are immutable limits on human time scales. In other words, this is not something that human beings or other animals can rapidly evolve out of as conditions warrant. The mass death events in recent history described above are great examples of this.

Indeed, most species today have experienced strong evolutionary pressure to adapt to cooler “icehouse” conditions during the prevailing glacial-interglacial cycles of the past 3 million years. The last time climate was as warm as it will be in the next 50 to 100 years was 3 million years ago during the “warm” Pliocene climate. Warming projected for moderate emissions scenarios going beyond 2100 brings temperatures into a range not seen since the Miocene (23 to 25 million years ago). There is a real danger that in the near future, temperatures and corresponding humidity will increase to such a degree that wet-bulb levels extend beyond the range seen for at least 3 million years, or perhaps 15 million years.

There is good news though. In climate model simulations it requires substantial warming (more than 6 degrees Celsius) to create zones deadly to endothermic mammals and birds over substantial areas. That is not likely to happen even by the year 2300 in the most likely carbon emissions scenarios. With 3 degrees Celsius of global warming, which current research indicates is the most likely future, most of the world’s terrestrial biosphere will avoid crossing the 35 degrees Celsius wet-bulb limit for significant periods of time.

The bad news is, as previously mentioned, the 35 degree Celsius wet-bulb is an upper limit for mammals, not a lower survivability limit, meaning that in reality the limit may be reached sooner, with less global warming. Lower limits on wet-bulb temperature might be as low as 31 degrees Celsius for humans and other mammals. But in this lower range, wet-bulb may not be a useful or reliable metric, and less-idealized and more case-specific calibrated metrics are likely to be of more use. These include the Wet Bulb Globe Temperature, a measure of heat stress in direct sunlight, or the Universal Thermal Climate Index, which accounts for ambient temperature as well as humidity, wind, and radiation, in the case of humans; or the temperature–humidity index in the case of animals.

Food systems involving livestock do not fare well in simulations with 3 degrees Celsius of global warming when using these livestock-specific metrics calibrated on modern animal tolerances. In the United States, just 3 degrees Celsius of warming conditions in simulations tend to be hotter—when humidity is factored in—than heat waves in North Africa today. These heat waves of the future could devastate US livestock yields, if they don’t kill the animals outright. Much more work needs to be done to understand how mammals and birds will fare globally, but most especially in tropical and subtropical regions. As noted above, animals there are already tolerant of high heat conditions, but they also have the least recent history with warmer and wetter than modern conditions and may therefore have a diminished capacity to adapt to warmer conditions.

With 1 degree Celsius of global warming already locked in, and several more that appear to be guaranteed by current policies, over the next century scientists will see just how much adaptability and genetic phenotypic plasticity there is. This raises the question of the degree to which humans can and should interfere to help this process along via more selective breeding or genetic modification.

As animals are moved by global warming outside of the environmental envelope that has encompassed them for literally millions of years, it is quite possible they will not have the ability to adapt. The best solution of course would be to avoid this experiment entirely. That is within the realm of feasibility. Limiting warming to less than 3 degrees Celsius by slashing the use of fossil fuels substantially reduces the area of the planet subject to dangerous moist heat stress conditions.

One may rely on either natural or man-made refugia, or, in other words, moving populations of endotherms either uphill or away from hot humid regions, or building giant air-conditioned enclosures, in order to allow animals to continue to survive. But, if humans are in the position of doing this in a big way, that already presumes the fight to preserve the major ecosystems that make our world beautiful has been lost. For the sake of all the animals, including us, I hope we choose a saner path.