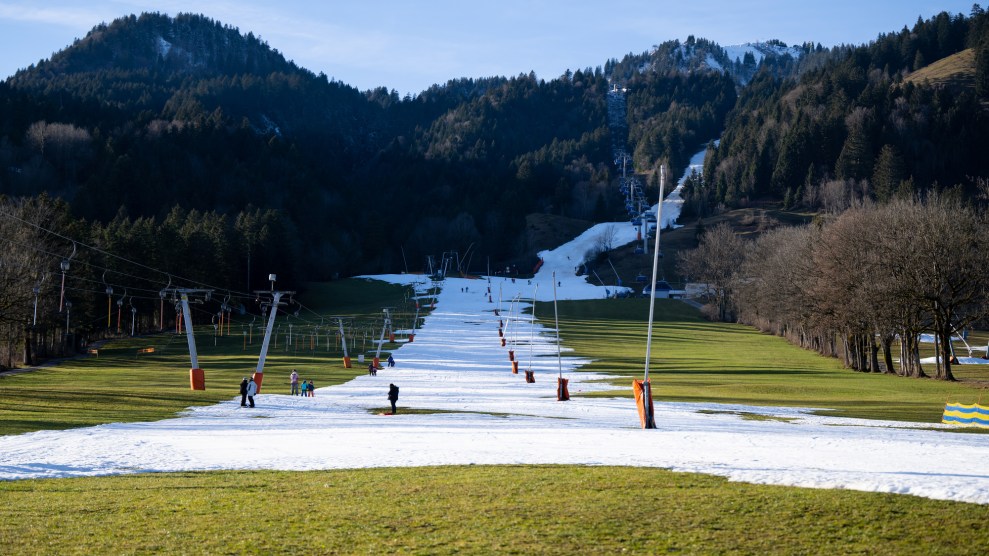 Eight countries across the continent have recorded their warmest January day ever, with temperatures in parts of Switzerland and southern Germany exceeding 68 degrees F and 90 monitoring stations in France setting new records over new year.

MeteoSwiss, Switzerland’s national weather and climate service, said a mild south-westerly wind combined with a Foehn effect were producing temperatures on the north side of the Alps that were “worthy of June.”

The Swiss resort of Adelboden, which this weekend hosts a skiing World Cup event on its classic Chuenisbärgli course, has said almost all of this year’s race will be run on artificial snow, with temperatures above freezing even at 6,500 feet.

“We can offer clients something—they can ski a bit in the morning, and bike in the afternoon.”

“The climate is changing, but what should we do here? Shall we stop with life?” said course director Toni Hadi. “Everything is difficult—not only preparing a ski slope.”

Altitude is no guarantee of immunity. The eastern Swiss resort of Splügen, long considered “snow safe” at around 5,000 feet, on Monday closed all its 18 miles of slopes until further notice, blaming “lack of snow, heavy rainfall, and high temperatures.”

Hacher Bernet, the head of the resort’s lifts operator, demonstrated why to Swiss TV cameras. Picking up a handful of dripping snow, he said: “It’s really too wet, like in spring. For skiing, the snow needs to hold together—there’s just too much water.”

In France, Méteo France said 2022 had ended with some of the warmest weather ever experienced for the time of year. Snowfall was close to normal in the southern Alps and at altitude to the north, it said, but very scarce below 2,200 meters (7,218 feet) and in the Pyrenees.

“There was a good start to the season, with a cold wave in mid-December which provided some snow for pretty much everyone,” said Laurent Reynaud, of the Domaines Skiables de France (DSF) organization, which represents lift operators.

“But then last week there was quite a bit of rain and warm temperatures, so runs had to close again.” Only half of all France’s slopes were open over the holidays, DSF said, with several entire resorts, particularly in the Jura, closed altogether.

Higher-altitude French resorts such as Les Deux Alpes, where almost 70 percent of slopes are above 2,000 meters (6,562 feet) have plenty of snow and were 100 percent booked over Christmas and new year. But mid- and low-level resorts are facing a grim season—and future.

Some are scrambling to provide alternatives for skiers, opening summer hiking paths and offering horse-drawn carriage rides or bouncy castles for children. Les Gets, part of the Portes de Soleil area, which has kept two of its runs open thanks to 300 snow canon, has opened up a chairlift for mountain bikes.

“It’s clear one lift for bikes hardly compensates,” Benjamin Mugnier, the director of the lift operator, told France 3 television. “But at least it means we can offer clients something—they can ski a bit in the morning, and bike in the afternoon.”

At about 3,900 feet, Combloux in Haute-Savoie has seen no skiing since December 24, and the entire Portes du Mont-Blanc ski area of which it is part remains closed. “We’ve laid on face-painting, scooters, inflatables—the lot,” said Aurélien Astre of the tourist office.

Patrice Blanc of the tourist office in nearby Praz, where none of slopes running down to the village are currently skiable, told Le Monde: “I’ve been in this village for 20 years and this is the first time I’ve seen so little snow at this time of year.”

Not all the continent’s resorts are affected, with good snowfall in Italy’s Dolomites, south of the Swiss Alps. But experts warn the warm conditions and lack of snow are a sign of things to come, with global heating set to radically change winter tourism.

Nor is artificial snow likely to provide much relief: a recent study by the University of Basel calculated that the water consumption of ski resorts who turn to snow canon could rise by an unsustainable—and, for much of the public, unacceptable—80 percent.

Wim Thiery, a professor of climate science at the University of Brussels, said that by the end of the century, “skiing in the Alps as we know is just going to be over. These problems will just get worse…as long as the climate warms.”