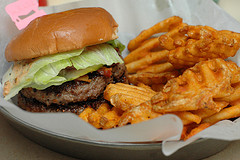 Somehow, the battle over whether to require chain restaurants to prominently disclose nutritional information has become a hot button issue. And it could flare up as lawmakers consider enacting a federal calorie labeling policy. New York City reinstituted the practice last year, and California is on track to follow its example. But calorie labeling has so far stalled outside of these progressive havens.

Why all the controversy? As Ezra Klein writes, calorie labeling is such a good idea that it will “one day come to seem like the most natural thing in the world.”

It turns out that the only drawback to requiring restaurants to disclose calorie information is that it could make people healthier… which could be bad for unhealthy restaurants and has therefore drawn the ire of the restaurant industry. In a brief following the defeat of a labeling measure in Maryland, the Restaurant Association of Maryland wrote that they do not oppose labeling but that they “simply want flexibility in how the information is displayed and nationwide uniformity through a federal approach.” Will they show calorie information under the counter, or in the trash can, perhaps?

By giving consumers the means to make more informed, healthy decisions about their meals, calorie labeling fits perfectly into our capitalist ideals. The consumer can choose a 400-calorie salad from Cosi, for example, or a 1,000-calorie burger and fries combo from McDonald’s. I, for one, know the euphoria that follows the knowledge that I just saved myself from 400 calories by ordering “fresco” at Taco Bell instead of my default 970-calorie choice Grilled Stuft Burrito and Double Decker Taco.

Why not let people enjoy the simple pleasures of eating healthy or unhealthy when they choose?