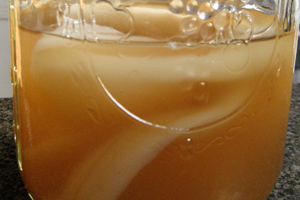 As an occasional kombucha drinker, I enjoy the strange, sour aftertaste of the trendy fermented beverage. But after spending as much as five bucks for a 16-ounce bottle of the stuff, I decided to see if I could successfully—and safely—brew my own batch. I also wondered whether the claims about kombucha’s health-enhancing properties had any merit.

Often mistaken for a mushroom, the culture used to make kombucha is actually a collection of yeast and bacteria. After 10 days of natural fermentation, the amalgam forms a thin pancake-looking colony referred to as a SCOBY (symbiotic culture of bacteria and yeast) surrounded by a fizzy, vinegar-like tonic—the stuff you drink. Remnants of the living mass make their way into bottled kombucha, which creeps some people out. “But really, it’s no more frightful than when yogurt first reared its head in health stores across America in the 1970s,” states one Whole Foods website. Kombucha has been consumed for thousands of years—some say it originated in Manchuria in 220 B.C.; others trace its roots to Russia—and enthusiasts prize the drink for its beneficial probiotics, organic acids, vitamins and antioxidants.

Because the fermentation happens naturally, I needed no special equipment besides a one-gallon mason jar to get the project bubbling. Brad Koester, a local kombucha brewer who also sells pickled beans and onions to San Francisco restaurants, presented me with my very own “mother” SCOBY; a gelatinous mass that resembled a small jellyfish asleep in amniotic fluid. I brewed about a gallon of green tea, added eight tablespoons of sugar, and poured all the liquid that would fit into the gallon jar with the SCOBY, making sure to cover the top of the mason jar with a thin cloth to prevent fruit fly infestation.

Maybe because kombucha brewers refer to this mass as the “mother,” I couldn’t help feeling like I was caring for a pet. Would I kill my SCOBY if I shook it? Would my SCOBY wither and die in my chilly Victorian house? I voiced my anxieties to Brad, who shot me back a text that said: “Patience grasshopper.” I could do nothing but wait and see if the “mother” would work her magic, and I’d have little control over the results.

This lack of control recently led to some problems among kombucha manufacturers and sellers. In June, Whole Foods voluntarily pulled all kombucha products from its shelves, citing concern that the alcohol levels had surpassed the legal limit of 0.5 percent. Because it kept fermenting in the bottle, some brands’ product became more alcoholic—sometimes up to 3 percent alcohol—over time. Some kombucha manufacturers have since recalibrated their beverages so that they won’t re-ferment, and the tea is back on store shelves.

I don’t know precisely how much alcohol will turn up in my homebrew, but unless I allow it to re-ferment, the possibility that it will get me drunk—or even buzzed—is remote. If mine registered in at 0.6 percent alcohol, I would have to drink five 16-ounce bottles of kombucha before reaching the effects of one can of Coors Light—which contains 4.2 percent alcohol.

Whether my homemade kombucha can provide health benefits turns out to be a far more complicated question. Beverage manufacturers praise the elixir for “improving liver, gall bladder, and digestive function” and being able to “enhance the body’s normal toxin elimination process.” But little scientific research has been conducted on the stuff, and these claims are mainly based on anecdotal evidence.

That the probiotics in kombucha might aid digestion has certainly caught people’s attention. GT’s Synergy Kombucha, the leading brand on the market, claims its probiotic content includes S. boulardii and Lactobacillus, bacteria commonly found in yogurt. S. boulardii is actually a yeast, explained Boulder nutritionist and herbalist Matthew Becker. “It has a great effect on normalizing the system, it crowds out bad bacteria, and it allows good bacteria to proliferate.”

Believers also praise the drink for its array of organic acids. Becker maintains that the malic acid in kombucha contains mildly detoxifying properties, and Adam Goodman, a Santa Cruz brewer and owner of Kombucha Botanica, added that the drink’s combination of acetic acid, gluconic acid, and succinic*acid “has a powerfully detoxifying effect.” But while many kombucha makers boast about their brew’s glucuronic acid—which may play a role in ridding the body of harmful chemicals—Goodman believes research that says none has ever been detected in the beverage. Among others, Stuart Tompson, director of Gaia Research Institute, continues to cite several studies which report that low levels of glucuronic acid are found in kombucha.

Overhyping the benefits of a beverage can lead producers into sticky legal situations. Millenium Products, makers of GT’s, currently faces a class action lawsuit, wherein plaintiff Gretchen Patch aims to “put an end to the deceptive, misleading, unfair, and unlawful labeling and advertising of GT’s” and claims she never would have bought the beverage if she had known its health benefits had not been scientifically proven. What’s worse, the lawsuit says, “serious health risks may be associated with the product.”

And Patch is not the only one to voice concern about the risks involved in kombucha. In 1995, two women who had shared the same kombucha culture became seriously ill; one went into cardiac arrest and died. Another man was hospitalized in 2009 after possibly suffering lactic acidosis, a build-up of lactic acid in the blood stream that can be life-threatening, as a result of drinking kombucha.

One potential risk of growing my own kombucha is that even though the high acetic acid content would eat away at any potentially harmful bacteria, dangerous molds could find their way into the mix. Cornell microbiologist Ramón Mira de Orduña raises concerns over the possibility that molds like penicillium and aspergillus could proliferate. The molds may produce mycotoxins, which are “fairly toxic and carcinogenic,” warned Mira de Orduña. “If you do that at home, and you’re not sure how to control that, that could be dangerous.” The mold would be visible on the surface of the SCOBY, though, or might expel a funky odor, so keeping an eye out for anything fuzzy could decrease the chance of drinking cancer-causing agents.

The danger of these molds is much worse for those with already suppressed immune systems. So trying to cure illnesses like AIDS and cancer with lots of kombucha drinking, as was trendy in the ’90s, could be a bad idea. But for healthy people who drink small quantities of kombucha (4 ounces or so a few times a week), the risks involved still seem pretty low.

But what about the question my friends keep asking me: Will my kombucha cure their hangovers? My guess is the caffeine and the sugar in the drink might have something to do with any morning-after boost. Mira de Orduña doesn’t even go that far. “Sure, the liquid might have some effect,” he chuckled, because “often when you have a hangover, you’re dehydrated. If someone found something that officially worked against hangovers, they would’ve made a billion dollars by now.”

Noted. My kombucha won’t be ready for another few days, but I have high hopes.

*Note: This sentence originally listed usnic acid, but should have said that succinic acid combines with gluconic and acetic acids to produce a detoxifying effect. Usnic acid is also found in kombucha, but was not mentioned by Goodman.