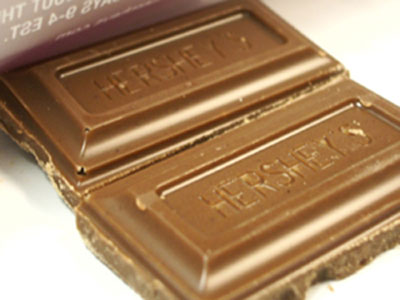 As far as sweet confections go, chocolate tops my list. But the sourcing reality of some mass-produced chocolate’s main ingredient, cocoa, is a bitter pill to swallow.

Six years ago, children who had been trafficked from Mali to Cote d’Ivoire to work on cocoa plantations filed a lawsuit in US courts against Archer Daniels Midland, Cargill, and Nestle. The children described being beaten and forced to work for 12 to 14 hours a day without pay, given little food and sleep. The lawsuit is ongoing.

Even though chocolate manufacturers like Cadbury, Ben & Jerry’s, and Green & Black’s (owned by Cadbury/Kraft) have agreed to increase their purchases of Fair Trade Certified cocoa, Hershey’s has kept mum on its cocoa sources, according to a report released last year by four labor rights groups:

While Hershey’s CEO received an $8 million compensation package in 2009, many of the farmers who grow cocoa in Cote D’Ivoire and Ghana that ends up in Hershey products are barely able to cover their costs, and as a result, use unpaid child labor and even forced labor on farms.

Global Exchange, the International Labor Rights Forum, and other fair trade groups are pressuring Hershey’s to raise the bar on the company’s international child labor policies. Mother Jones called the company to get its statement concerning the accusations, but didn’t receive a response by press time. Break me off a piece of my heart.