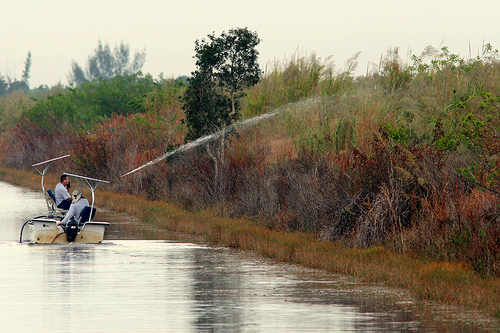 In 1996, the Talent Irrigation District in Oregon set out to kill off aquatic weeds in irrigation canals by spraying herbicides in the water. But in addition to a lot of dead weeds, it got a lot of dead fish—92,000 steelhead salmon. Since then, legal battles have raged over how the government should regulate pesticides used on or near waterways.

On Tuesday, pesticide users marked a possibly major victory in that battle, as a bill that would allow them to bypass the Clean Water Act and spray pesticides over waterways passed through the Senate Agriculture, Nutrition and Forestry Committee.

Currently, once a pesticide has been deemed safe by the EPA, there’s nothing to compel users of the pesticide to follow guidelines in the Clean Water Act for minimizing how much pesticide makes it into streams, lakes, or other water bodies. But in the long wake of the Talent incident, in 2009 a federal court ordered the EPA to require pesticide users to get a permit before they could spray into water.

After some delay, that permit was set to be available in October. But the bill, H.R. 872 (given the opaque moniker Reducing Regulatory Burdens Act), would bar the EPA or states from requiring it, freeing pesticide users to spray without regard for the damage the pesticide might cause to aquatic plants and animals.

Despite the fact that pesticides are known to wreak havoc on amphibians and groundwater supplies, proponents of the bill argue that the permits will place an undue burden on farmers and other pesticide users. The American Farm Bureau Federation, which supports the bill, states on its website that the permit could “create significant delays, costs, reporting burdens and legal risks from citizen suits for thousands of permit holders without enhancing the environmental protections” afforded by current pesticide regulation.

As May Wu of the Natural Resources Defense Council put it, “This bill would take that permit and throw it in the trash.”