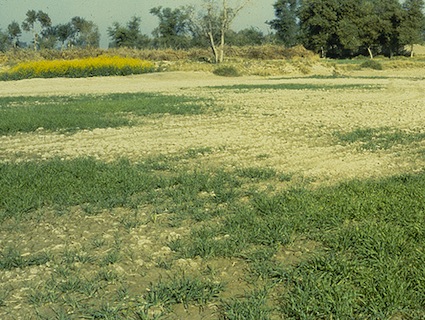 August hasn’t been a happy month the for the Monsanto public-relations team. No, I’m not referring to my posts on how Gaza and Mexico don’t need the company’s high-tech seeds—the ones it will supposedly be “feeding the world” with in the not-so-distant future.

Monsanto’s real PR headache involves one of its flagship products very much in the here and now: the herbicide Roundup (chemical name: glyphosate), upon which Monsanto has built a highly profitable empire of “Roundup Ready” genetically modified seeds.

The problem goes beyond the “superweed” phenomenon that I’ve written about recently: the fact that farmers are using so much Roundup, on so much acreage, that weeds are developing resistance to it, forcing farmers to resort to highly toxic “pesticide cocktails.”

What Roundup is doing aboveground may be a stroll through the meadow compared to its effect below. According to USDA scientist Robert Kremer, who spoke at a conference last week, Roundup may also be damaging soil—a sobering thought, given that it’s applied to hundreds of millions of acres of prime farmland in the United States and South America. Here’s a Reuters account of Kremer’s presentation:

The heavy use of Monsanto’s Roundup herbicide appears to be causing harmful changes in soil and potentially hindering yields of the genetically modified crops that farmers are cultivating, a US government scientist said on Friday. Repeated use of the chemical glyphosate, the key ingredient in Roundup herbicide, impacts the root structure of plants, and 15 years of research indicates that the chemical could be causing fungal root disease, said Bob Kremer, a microbiologist with the US Department of Agriculture’s Agricultural Research Service.

Now, Kremer has been raising these concerns for a couple of years now—and as Tom Laskaway showed in this 2010 Grist article, the USDA has been downplaying them for just as long. Laskaway asked Kremer’s boss at the Agricultural Research Service, Michael Shannon, to comment on Kremer’s research. According to Laskaway, Shannon “admitted that Kremer’s results are valid, but said that the danger they represent pales in comparison to the superweed threat.”

So let’s get this straight: The head of the USDA’s crop-research service agrees that Roundup damages soil and thinks the superweed problem is even more troublesome. In the face of these two menaces, you might expect the USDA to intervene to curtail Roundup use. But Shannon meant his statement as a rationale for ignoring Kremer’s work. Meanwhile, the USDA keeps approving new Roundup Ready crops—ensuring that the herbicide’s domain over US farmland will expand dramatically.

Kremer commented on his employer’s reception of his work in a Reuters article last year:

“This could be something quite big. We might be setting up a huge problem,” said Kremer, who expressed alarm that regulators were not paying enough attention to the potential risks from biotechnology on the farm, including his own research…”Science is not being considered in policy setting and deregulation,” said Kremer. “This research is important. We need to be vigilant.”

Meanwhile, at a conference in Boulder, Colorado, in early August, another mainstream ag expert raised serious concerns about the poison, according to an account in Boulder Weekly. Iowa-based consultant Michael McNeill, who has a Ph.D. in quantitative genetics and plant pathology from Iowa State University, advises large-scale corn and soy farmers on weed control and soil fertility. He’s observing trends in the field that are consistent with Kremer’s research. Here’s Boulder Weekly:

McNeill explains that glyphosate is a chelating agent, which means it clamps onto molecules that are valuable to a plant, like iron, calcium, manganese, and zinc.…The farmers’ increased use of Roundup is actually harming their crops, according to McNeill, because it is killing micronutrients in the soil that they need, a development that has been documented in several scientific papers by the nation’s leading experts in the field. For example, he says, harmful fungi and parasites like fusarium, phytopthora and pythium are on the rise as a result of the poison, while beneficial fungi and other organisms that help plants reduce minerals to a usable state are on the decline. He explains that the overuse of glyphosate means that oxidizing agents are on the rise, creating oxides that plants can’t use, leading to lower yields and higher susceptibility to disease.

According to McNeill, problems with Roundup aren’t limited to the soil—they also extend to Roundup Ready crops and the animals that eat them.

McNeill says he and his colleagues are seeing a higher incidence of infertility and early-term abortion in cattle and hogs that are fed on GMO crops. He adds that poultry fed on the suspect crops have been exhibiting reduced fertility rates.

McNeill made an interesting comparison to the Boulder Weekly reporter: “Just as DDT was initially hailed as a miracle pesticide and later banned, researchers are beginning to discover serious problems with glyphosate.”

Well, the EPA has been in the process of reviewing glyphosate’s registration since July 2009, but I’ve seen no evidence that the agency has the fortitude to challenge Monsanto and its multibillion-dollar empire. Just last week, Kremer told Reuters that neither the EPA nor the USDA has shown interest in further exploring his research. Maybe Monsanto’s PR team doesn’t have much to worry about, after all.