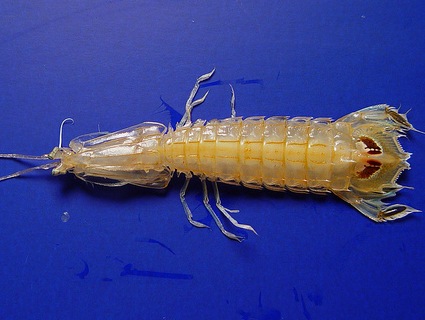 Little more than a year after BP oil disaster, seafood from the Gulf of Mexico is “as safe to eat as it was before the oil spill,” the FDA insists on its website.

But along the Gulf itself, questions linger within the very fishing communities that rely on the Gulf’s bounty both for sustenance and a living, as this CNN report shows (video below). For one thing, shrimp populations have plunged. The New York Times reported last month that Gulf fisherperople were complaining of the worst white-shrimp season in 50 years, with yields 80 percent lower than normal.

Several fisherman and processors make similar complaints in the CNN piece, and admit that they feel less safe eating shrimp now than they did before the spill. One makes an even more startling claim (see 2:47 mark of the video): “fisherman are bringing in shrimp without any eyes … they evidently have lost their eyes and they’re still alive.”

Of course, there is as yet no hard link the BP spill with the shrimp declines or this disturbing eyeless condition. But you won’t find such links if you don’t look for them—and with the FDA insisting that everything is fine, it’s hard to discern any urgency among federal authorities to examine the question.

While the federal government takes a see-no-evil approach, the Natural Resources Defense Council (NRDC) has been looking at FDA data on petrochemical traces in Gulf fish—and charging that the agency has been way understating safety concerns, as I reported last month.

In the CNN report, NRDC senior scientist Gina Solomon reiterates those concerns, claiming that the FDA’s tolerance levels for petroleum traces do not adequately protect children and pregnant women who regularly eat Gulf seafood. She adds that “it’s likely that the population declines in the shrimp are due to the same contaminants that we’re worried about if people eat them.”

FDA spokesperson Robert Dickey appears in the CNN report to rebut NRDC’s warnings about toxicity levels. “The seafood from the Gulf of Mexico is safe to consume for all consumers including pregnant women and children,” he asserts. He adds”

The amount of seafood that somebody would have to eat would be the equivalent to sixty-three pounds of shrimp, or five pounds of oyster, or nine pounds of fin fish every day for five years before they would exceed levels to be concerned of. That’s how low the residues are in the seafood.

The NRDC’s Solomon took to her blog to contest those claims—convincingly, it seems to me. She writes:

FDA only examined what would be safe for an adult. When they did their calculations they looked at what level of contamination would be safe for a 176 pound person. Children are known to be more vulnerable to contaminants in seafood because they eat more per pound of their bodyweight and their developing bodies are more sensitive to harmful contaminants. What’s more, in a pregnant woman, these contaminants can cross the placenta and harm the developing fetus. This increased vulnerability is well known to science, and other agencies require that children be included in safety assessments.

It would be convenient for the Obama administration, which recently reopened deepwater driling in the Gulf, for things to return to normal in the region’s fishery. BP, too, would benefit from not having to compensate fisherpeople for lost harvests. I hope such considerations aren’t being placed above the obligation to protect the public and the Gulf’s fishing communities from last year’s disastrous spill.