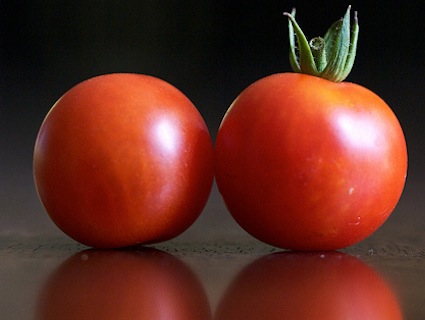 Walk into a fancy grocery store today and you’ll see them: stacks of pristine, glistening organic tomatoes. But what does it take to generate a bounty of organic tomatoes in January?

According to a great New York Times story by Elizabeth Rosenthal, the bulk of organic tomatoes now gracing the produce aisles of US supermarkets hail from Mexico’s Baja Peninsula—a desert. Rosenthal reports that Baja’s production of US-bound organic tomatoes has expanded dramatically in recent years. And growing large monocrops in a desert, organic or not, requires lots and lots of water. Here’s Rosenthal:

The explosive growth in the commercial cultivation of organic tomatoes here, for example, is putting stress on the water table. In some areas, wells have run dry this year, meaning that small subsistence farmers cannot grow crops.

That’s a pretty brutal tradeoff: A luxury product for export—fresh winter tomatoes—squeezes out people who are trying to feed themselves from their own land. And lest anyone argue that the arrangement is somehow building wealth and pulling people out of poverty in this part of Mexico, Rosenthal notes that the going wage for working in these mercilessly hot fields is $10 per day—twice the local minimum wage, but not enough to pull anyone out of poverty and certainly not sufficient compensation for drawing down the water table and snuffing out other forms of agriculture.

In other words, the profits from our booming market in organic winter tomatoes are not being distributed very widely in the place where they’re being grown. They’re going to our supermarkets, to distributors, and to a few landholders in Baja—many of whom are American, Rosenthal reports. Farm workers get scraps. Meanwhile, the cost of the arrangement—aquifers that are depleted far more rapidly than they can be replenished, generating a long-term water crisis—falls squarely on the backs of Baja residents.

In addition to lacking water, desert land is also deficient in organic matter: decayed plant material that gives soil tilth and the ability to hold nutrients. Just how stark is the landscape on which these tomatoes are being grown? According to Rosenthal, growers in Baja “describe their toil amid the cactuses as ‘planting the beach.'”

In other words, these crops are literally being grown in sand. That reminds me of another region famous for winter tomatoes and dirt-cheap labor costs: Immokalee, Florida, source of a huge percentage of nonorganic winter tomatoes consumed in the United States. I’ve been to Immokalee, and when I was there I plunged my hand into the ground between rows of tomato plants. What I found was pure sand. As Barry Estabrook puts it in his excellent Tomatoland, central Florida’s :sandy soil makes for great beaches,” but it’s “devoid of plant nutrients.” As a result, farmers there “pump the soil full of chemical fertilizers.”

All of this, of course, raises serious questions about what organic agriculture has come to. There’s no reason to doubt that Baja’s thriving tomato growers are following the letter of organic code, i.e., forgoing synthetic pesticides and fertilizers. But as conceived by its founders, like the great British agriculturalist Sir Albert Howard, organic agriculture is about working within ecological niches to create a bounty of food while sustaining those niches.

What’s going on in Baja seems more about generating a premium-priced product while systematically degrading a landscape. Want organic tomatoes in the cold months? Buy them in a can.