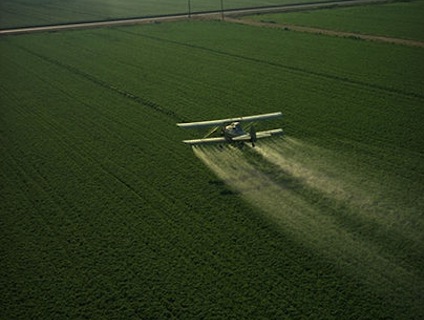 Last week, NPR food and agriculture correspondent Dan Charles delivered an interesting report on a topic I’ve been following for a while: “superweeds.” As farmers planted millions of acres with crops engineered to withstand Monsanto’s Roundup herbicide, Roundup-resistant weeds have cropped up—prompting farmers to apply toxic herbicide cocktails in a desperate, and losing, battle to keep up with weed evolution.

And Sunday, Charles followed up with a blog item asking just what Monsanto scientists were thinking when they proposed Roundup Ready technology as a blanket solution to industrial agriculture’s weed problem.

In its 1993 petition to the USDA to deregulate Roundup Ready soybeans, Charles reports, Monsanto insisted that glyphosate, the active ingredient in Roundup, is “considered to be a herbicide with low risk for weed resistance.” Citing agreement from university scientists, the company declared it “highly unlikely” that widespread use of Roundup Ready technology would lead to resistant weeds.

Well, the company won the regulatory battle. Starting in 1996, farmers began to plant Roundup Ready corn, soy, and cotton across millions of acres of farmland without restriction. And the USDA continues to deregulate new Roundup Ready crops, unleashing alfalfa and Kentucky bluegrass into the mix last year. Meanwhile, Roundup-resistant weeds have been galloping through the south’s cotton fields and Midwest’s corn and soy fields. No fewer than 20 different weed species, Charles reports, now thrive despite dousings of the poison.

For his blog post, Charles asked scientists who worked for Monsanto in the ’90s how they got it so wrong. “They all told a similar story,” Charles reports. Here it is:

First, the company had been selling Roundup for years without any problems. Second, and perhaps most important, the company’s scientists had just spent more than a decade, and many millions of dollars, trying to create the Roundup-resistant plants that they desperately wanted — soybeans and cotton and corn. It had been incredibly difficult. When I interviewed former Monsanto scientists for my book on biotech crops, one of them called it the company’s “Manhattan Project.”

Considering how hard it had been to create those crops, “the thinking was, it would be really difficult for weeds to become tolerant” to Roundup, says Rick Cole, who is now responsible for Monsanto’s efforts to deal with the problem of resistant weeds.

Charles lets this explanation stand unchallenged. That surprised me, because he is one of the nation’s reporters most steeped in the history of GM crop commercialization. His 2001 book Lords of the Harvest remains, to my knowledge, the best account of GM crop technology’s gestation and birth.

And it includes an account of the discovery of the Roundup Ready gene that, I think, makes the accepted explanation sound absurd. For much of the 1980s, Charles reports in Lords of the Harvest, scientists in Monsanto’s budding agriculture-biotechnology wing struggled mightily to find a gene that would effectively confer Roundup resistance and also allow plants modified with it to grow robustly. After years of near misses and tantalizing failures in the lab, they “discovered that nature had trumped all of their efforts.”

Their eureka moment involved a vast Luling, Louisiana, chemical factory where Monsanto manufactured Roundup. The plant “covers 1500 acres along the Mississippi River,” Charles reported. Outside of the Luling plant, he continues, an uncontrolled experiment in glyphosate exposure had been taking place for years:

There are glyphosate residues in the ponds, in the mud at the bottom pf the ponds, and in the soil alongside. Those residues exert a steady pressure on the population of microorganisms in the water and the soil, eliminating those that are sensitive to glyphosate and selecting for those that are less vulnerable.

People from the company’s cleanup team collected sludge samples from affected ponds for analysis in the early 1980s. The samples sat idle for years in a company lab, until the GMO team thought to look there. When they did, they found the gene they were looking for in that glyphosate-laced sludge from Luling— a gene that “proved to tolerate Roundup far better than any gene the scientists had created in the laboratory,” and didn’t interfere with plant growth.

In other words, the scientists found that landscapes subjected to regular Roundup exposure develop organisms that evolve to resist Roundup. Or, to put it another way, while they themselves failed to identify the perfect Roundup Ready gene, wild organisms had done so as a matter of course. How could this information not have raised for them the possibility that weeds might develop resistance in farm fields?

Meanwhile, even as Monsanto publicly denied the likelihood of resistant weeds as it pushed to get Roundup Ready seeds deregulated, at least some people were raising concerns. Margaret “Mardi” Mellon, senior scientist with the Union of Concerned Scientist’s food and environment program, pointed me to a long report from 1990 called “Biotechnology’s Bitter Harvest,” authored by activist researchers from prominent environmental groups like World Wildlife Fund and Environmental Defense. The report doesn’t appear to be online, but its introduction warns explicitly of at least one pathway to weed resistance: “Once [Roundup Ready technology is] in widespread use, the exchange of herbicide-tolerance genes between the domesticated crops and weedy relatives could ultimately result in the need for more herbicides to control herbicide-resistant weeds.” The report was prominent enough that Charles mentions it in his book.

And by 1998—just two years after Roundup Ready crops first hit fields in the United States—the assertion that weeds somehow couldn’t develop resistance to glyphosate had already crumbled in Australia, where resistant ryegrass had developed in an orchard where glyphosate had been “used three times a year for 15 years” to control weeds, as this 1998 paper from the peer-reviewed journal Weed Science shows.

Reckoning directly with the problem of weed resistance would have meant regulations stipulating that farmers not plant Roundup Ready crops years after year on the same line—a requirement that would have cut into Monsanto’s bottom line.

And today, as Roundup Ready technology crumbles under the weight of superweeds, Monsanto and other agrichemical industry heavyweights are now colluding to engineer new crops to be resistant to both Roundup and other, more toxic herbicides. As I reported a while back, they are claiming once again that these so-called “stacked-trait” crops are unlikely to generate resistant weeds. This time, prominent mainstream scientists from Penn State are bluntly predicting the technology will generate weeds resistant to multiple herbicides.

All in all, I think Charles is being too generous to Monsanto scientists in uncritically reporting their claims that they were shocked, shocked by the emergence of superweeds. Their explanation reminds me of a famous quote from the writer who could be thought of as industrial agriculture’s first prominent critic, The Jungle author Upton Sinclair: “It’s hard to get a man to understand something when his salary depends upon his not understanding.”