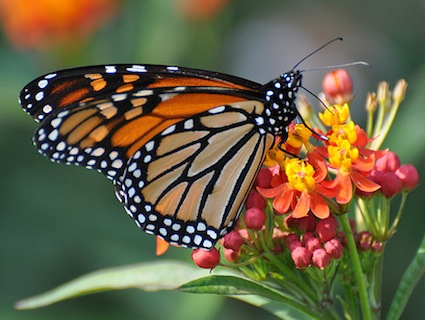 If any insect species can be described as charismatic minifauna, it’s the monarch butterfly. The gorgeous creatures flutter about in a migratory range that stretches from the northern part of South America up into Canada. The monarch is the only butterfly species that undertakes such a long-distance migration. And when they alight upon a place en masse, heads turn. No fewer than five states—Texas, Alabama, Idaho, illinois, and Minnesota—claim the monarch as their state insect.

Unfortunately, the monarch populations appear to be in a state of decline. Why? A new study (abstract; press release) from University of Minnesota and Iowa State University researchers points to an answer: the rapid rise of crops engineered to withstand herbicides.

Their argument is powerful. Monarchs lay their eggs on one particular kind of plant: the milkweed. And when the eggs hatch, the caterpillars feed exclusively on the weed. Milkweed is common throughout the Midwest, and has long thrived at the edges of corn fields. But when Monsanto rolled out its “Roundup Ready” seeds in 1996, which grew into plants that could thrive amid lashings of its flagship Roundup herbicide, the Midwest’s ecology changed. As farmers regularly doused ever-expanding swaths of land with Roundup without having to worry about the hurting their crops, milkweed no longer thrived—and as a result, the charismatic butterfly whose caterpillars require it can no longer thrive, either.

The researchers estimate that the amount of milkweed in in the Midwest plunged by 58 percent from 1999 to 2010, pressured mainly by the expansion of Roundup Ready genetically engineered crops. Over the same period, monarch egg production in the regions sank by 81 percent. And it turns out that monarchs tend to lay more eggs milkweeds that sprout up in and around cultivated fields. So when farmers snuff out the milkweeds with Roundup, they’re exerting a disproportionate effect on monarchs.

Now, there are no doubt other pressures facing the monarch, including habitat loss in Mexico, but it’s undeniable that when you drastically reduce egg-laying habitat and caterpillar food in one big go, you’re going to harm a butterfly species.

Of course, this is not the first time scientific research has implicated GMO crops as a threat to monarch butterflies. Besides Roundup Ready, Monsanto has succeeded in commercializing one other trait: what’s known as Bt, which it uses in corn and cotton seeds. So-called Bt crops have been engineered to express the toxic-to-bugs gene of the Bacillus thuringiensis bacteria. 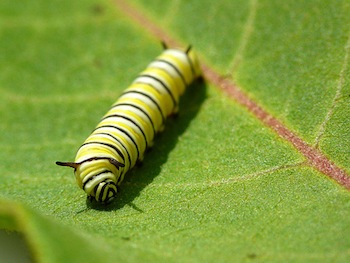 Habitat, sweet habitat: A monarch caterpillar lounges on a milkweed leaf. : sankax/FlickrBack in 1999, Cornell researchers published a paper in Nature expressing concern that that pollen from Bt-engineered corn would drift onto milkweed and poison monarchs. In their lab tests, they found that when monarch caterpillars fed on milkweed dusted with pollen from Bt crops, they consumed less food, developed more slowly, and died at much higher rates than the control group.

The paper generated a lot of controversy and got activist groups charged up. But in 2005, a USDA study found that Bt corn wasn’t a threat to the popular butterfly after all.  The researchers concluded that in the Midwest’s cornfields, not enough Bt pollen was accumulating on milkweed to have an effect.

The story here is about more than the decline of a butterfly species. It’s also about the unintended consequences of subjecting millions of acres of our best farmland to a single chemical-dependent technology, one literally designed to wipe out plant biodiversity in farm fields. We know about the plight of the monarch only because it’s a fascinating, beloved creature that attracts scrutiny from researchers. What else are we sacrificing to industrial agriculture ramped up by genetic engineering?