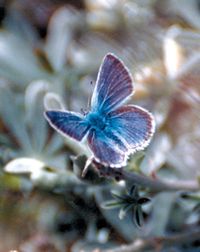 The delicate and distinctive Mission Blue Butterfly was first discovered in San Francisco’s Mission District around 1937. Since then, the city’s layout has changed considerably, rendering much of the iridescent butterfly’s urban habitat inhospitable. Although the Mission Blue has been on the federal Endangered Species List since 1976, its recovery has been slow. The butterfly has only a handful of habitats (San Bruno Mountain, San Francisco’s Twin Peaks, Marin headlands) and its larva eat only three kinds of lupine plants. Add to that fact that adult butterflies have only a week to live and breed, and you’ve got a bit of a conservation challenge.

However, California wildlife professionals are not easily discouraged. San Francisco’s Mission Blues have been suffering due to El Nino-fueled climate change, so this year the city introduced pregnant females to Twin Peaks, hoping to drive up population for 2010.