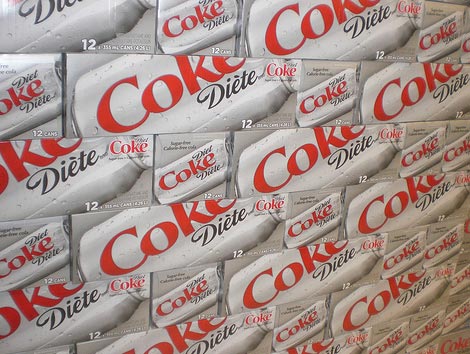 A whole wall of Diet Coke. <a href="http://www.flickr.com/photos/like_the_grand_canyon/3117707361/sizes/m/in/photostream/">Like_The_Grand_Canyon</a>/Flickr

Sugar-free diet soda has gotten a free pass in the recent debates on soda regulation, covered in Monday’s Econundrum. Proponents of soda bans or taxes have attacked Big Gulps and other giant drinks sweetened with sugar or high fructose corn syrup, but DIET COKE devotees may want to hold off on gloating. A new study found that diet soda drinkers had altered brain responses to saccharin (Sweet’N Low) compared to nondrinkers.

Diet soda may be bad precisely because it has no sugar and fewer calories. When you eat something sweet, researchers have argued, your body comes to expect a caloric boost. Low or no calorie artificial sweeteners could screw up this link in the brain.

Researchers at the University of California-San Diego and San Diego State University recruited 24 participants, half of whom drank diet soda regularly, and imaged their brains responding to a squirt of water flavored with saccharin or sugar water. Artificial sweeteners taste sweet, but they don’t quite taste like real sugar. Researchers using fMRI, an imaging technique that tracks blood flow in the brain, see a different response to sugar than to sweet substitutes like sucralose (Splenda) and, in this study, saccharin.

In diet soda drinkers, however, the right orbitofrontal cortex of their brains could no longer distinguish between real sugar and fake sugar. In addition, there was decreased activation in an area called the caudate head. The more often the participants reported drinking diet soda, the less activity in this brain area, and the study authors had previously linked decreased activation in the caudate head to obesity.

This is a small-scale study, and it’s far too early to say that diet soda makes you fat. Bedeviled by confounding factors, observational studies tracking obesity in diet soda drinkers have come up with conflicting results. But a controlled study in rats from 2010 does suggest a link between diet soda and obesity. Rats fed saccharin-sweetened yogurt ate more rat chow, gained more weight, and had more body fat than those who got the same amount of yogurt with a natural sugar, glucose, instead. This new fMRI study is a nice follow-up that begins to extend the story in humans. Further research into other sweeteners like aspartame, most commonly found in diet soda, is needed too.

Health concerns of artificial sweeteners do add a twist to the recent debate over sugar and high fructose corn syrup (HFCS). All the studies mentioned so far come from independent researchers, but the sugar lobby has tried to heap its own criticism on competitors. The Truth About Splenda, for example, is a Sugar Association website that prominently displays a study about Splenda altering bacteria in the stomachs of rats. This study was funded by the Sugar Association, a crucial fact whose only mention is buried in an outside news article reproduced on the website. (Or you could pony up $43 to read it in the paywalled journal article.)  As least it refrains from repeating the claim that artificial sweeteners cause cancer, which has been fairly thoroughly debunked.

The sugar industry’s criticism of Splenda is interesting given its feud with the corn industry that produces high fructose corn syrup. The two industries have historically been at odds, with HFCS having replaced sugar as the sweetener of choice in soda and pretty much everything else. Many of these corn companies make both high fructose corn syrup and artificial sweeteners. There is a practical reason for this link: Artificial sweeteners are up to hundreds of times sweeter than sugar, so the bulk of a Splenda or Sweet’N Low packet is actually dextrose or maltodextrin, food addictives derived from corn. Tate & Lyle, for example, manufactures Splenda along with a whole host of corn derivatives including corn syrup and dextrose—all of which compete with sugar.

Advocates of recent soda regulation are a third voice who have have criticized the health effects of sugar and high fructose corn syrup alike. (The two are chemically very similar.) But lingering concerns about artificial sweeteners are why soda regulation advocates might want to be careful with how they make their case against sugar and HFCS. Advocates such as Dr. Robert Lustig have argued it was the war on fat that drove us to overconsumption of sweet. By a similar logic, vilify sugar or HFCS as poison and you run the risk of pushing people into artificial sweeteners as a “healthy” alternative.

In the end, everybody is a probably little bit right: Drinking one can of soda, whether diet or regular or Mexican Coke, isn’t going to kill you. Drinking them all the time might not be so great.