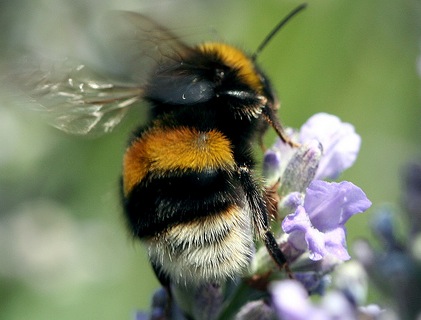 Corn prices remain quite high, driven up by the summer’s prolonged drought. And since the United States is by far the globe’s largest corn producer, prices will likely stay high until the next bumper crop in the Midwest replenishes global corn reserves. To take advantage of high prices, US farmers will likely plant a whole lot of corn in spring 2013—at least as much as they did in 2012, which marked a 75-year high in corn acreage. And that could be bad news for bees, commercial honey-producing ones and wild bumblebees alike, both of which have experienced severe declines in recent years.

What does the health of bees have to do with the corn crop? A growing weight of evidence links a class of pesticides called neonicotinoids, which are used on nearly the entire US corn crop, to declining bee health. In March, I looked at three studies that had just been released, two of them published in the prestigious journal Science, making the link. Those papers came on the heels of a damning one from Purdue University researchers (which I discussed here). And now comes yet another, this one (abstract; I have the full study but can’t upload it because of copyright issues) published by UK researchers in another prestigious publication, the British journal Nature.

The researchers treated 40 colonies of bumblebees over four weeks as follows: 10 got exposed to tiny doses of a common neonicotinoid pesticide (10 parts per billion, a level within a range of what bees experience in corn fields); 10 got exposed to small doses of another common pesticide, this one of the pyrethroid class; 10 were exposed to both pesticides; and 10 served as the control group, and were kept free of pesticides. The bees were tracked with radio frequency identification (RFID) tagging technology.

The results: Both groups of neonic-treated bees saw sharp declines in overall worker bee productivity. The bees treated with only pyrethroids fared a little worse than the control, but not much. The ones treated with both pesticides fared worst of all—suggesting a possible cocktail effect, meaning that pesticides combinations may work in ways that mutually amplify the effects of the individual pesticides.

Among the neonic-treated bees, foragers—the ones that go out in search of pollen to bring back—were much less successful than their counterparts in the control group: They brought back significantly less pollen in each forage run, and took significantly longer on each run. As a result of lower per-forager pollen intake, the treated hives recruited more workers to go out and forage than the control hives—and even with more foragers on the hunt for pollen, they still managed to get less pollen than the controls, meaning less food for the hive.

The reduced worker efficiency had two other “knock on” effects for overall hive health. The first is that recruiting more foragers to collect pollen is a risky strategy—individual bees can get lost. The treated colonies paid the price—the neonic-only colonies experienced 50 percent more lost workers than the control, and the colonies exposed to both pesticides lost 55 percent more.

The other effect has to do with brooding—raising the next generation of bees for the hive. The treated hives showed significantly lower production of new bees—probably, the researchers suggest, because they had to divert bees from brooding duties to foraging duties, and also because of less overall availability of pollen.

All of these factors, the researchers conclude, lead to colonies that are less resilient to the many stresses that confront bees in the field: loss of habitat, parasites, and viruses. Two of the 40 colonies involved in the study collapsed over its four-week course, both from the hives treated with the combined pesticides. The clear takeaway is that neonic pesticides, both alone and in combination with another pesticide, significantly damage bee health. To grow our massive corn crop, we’re killing our bees.

So where does this leave us? Well, the EPA stubbornly maintains its registration of neonic pesticides, the main maker of which is the German chemical giant Bayer. The agency does so, as I have written before, even though the registration hinged on a Bayer-funded study its own scientists have criticized as worthless.

And they aren’t the only government scientists who have concerns. In March, after the previous round of damning research, USDA’s bee researcher Jeff Pettis made a statement to the New York Times that I only caught while doing background research for this article. In the past, Pettis’ own research has suggested that neonics do harm, but he has stopped short of directly blaming them for bee decline. That seems to have changed. The Times quotes Pettis calling one of the Science studies “alarming,” and then goes on:

“Three or four years ago, I was much more cautious about how much pesticides were contributing to the problem,” Dr. Pettis said. “Now more and more evidence points to pesticides being a consistent part of the problem.”