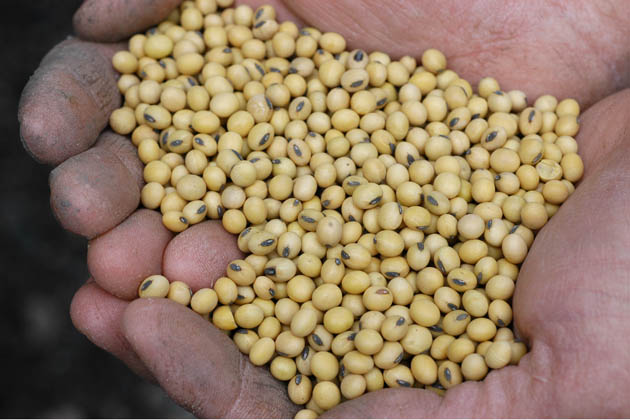 Vernon Hugh Bowman, a 75-year-old Indiana farmer, says that switching to Monsanto’s Roundup Ready soybeans “made things so much simpler and better.” Monsanto’s patented beans can survive when they are sprayed with the herbicide glyphosate, also known as Roundup, which makes pest control much easier. Monsanto is less impressed with Bowman: The Supreme Court heard oral arguments yesterday on a lawsuit that the company filed against him in 2007, accusing him of violating its patent on Roundup Ready soybeans.

Here’s what happened: Bowman bought seeds from a grain elevator that sold soybeans for animal feed, industrial use, or other nonplanting purposes. The elevator contained a lot of “second generation” Roundup Ready seeds—the spawn of original seeds that other farmers had bought and harvested from Monsanto. That’s not surprising, since “[Roundup Ready soybeans are] probably the most rapidly adopted technological advance in history,” said Seth Waxman, who is representing Monsanto. “The very first Roundup Ready soybean seed was only made in 1996. And it now is grown by more than 90 percent of  the 275,000 soybean farms in the United States.”

Bowman then planted the soybeans—and that’s the part that Monsanto objects to. Farmers who plant Monsanto soybeans have to sign an agreement saying they will not save the “second-generation” seeds and use them for the next harvest. Bowman didn’t replant his own Monsanto seeds, but he did plant seeds that contained somebody else’s second-generation Monsanto seeds. According to Monsanto, buying that grain and planting it to make more soybeans (as opposed to buying the grain to use for food or another purpose) is a patent violation, too.

Why aren’t the owners of the grain elevator to blame? After all, they’re the ones who sold the soybeans to Bowman, right? Wrong, says Monsanto: The grain elevator was selling the soybeans as grain for general purposes, not planting. Monsanto contends that the patent violation is Bowman’s fault because he took the grains and used them to create new versions of Monsanto’s patented soybeans that Monsanto, the patent holder, hadn’t sold him.

The company claims that violations like this could stymie investment in similar products in the future. “It would be near impossible to recoup your investments with that first sale, and so the more likely consequence is that research dollars would be put elsewhere,” said Melissa Arbus Sherry, assistant to the solicitor general at the Department of Justice, during the argument.

“They want the farmers to take all the risks associated with farming, yet they want to control how they use those seeds all the way down the distribution chain.”

Chief Justice John Roberts appeared to agree. “Why in the world would anybody spend any money to try to improve the seed if as soon as they sold the first one anybody could grow more and have as many of those seeds as they want?” he asked.

But Bowman’s lawyer, Mark Walters, argues that there have to be limits on how far and how long the patent on a GMO soybean extends. “They want the farmers to take all the risks associated with farming, yet they want to control how they use those seeds all the way down the distribution chain,” he said during oral argument.

Monsanto is no stranger to patent battles: ThinkProgress reports that the company devotes $10 million per year and 75 staffers to investigating and prosecuting farmers for patent violations. It has also sued more than 400 farmers over the last 13 years for patent infringement.

The Obama administration reportedly backs Monsanto, and urged the court to stay out of this case because it could have implications for patenting other products that can reproduce in fields like nanotechnology and genetics.