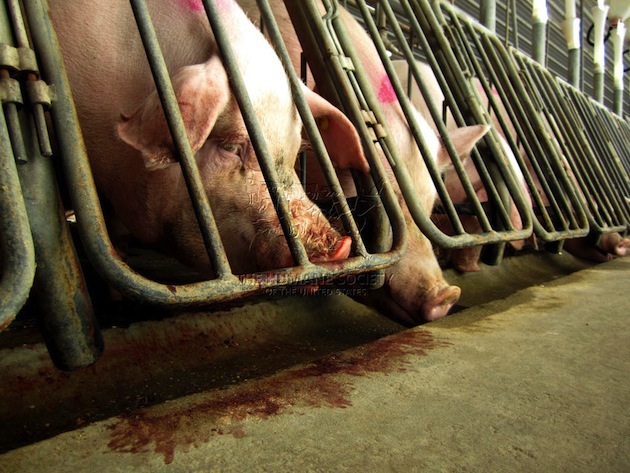 Pregnant sows in gestastation crates at a Smithfield facility, 2010, documented by a Humane Society of the United States investigation. HSUS

Among all the various dodgy aspects of factory-style meat production, the use of tight cages to confine pregnant female pigs surely ranks among the most awful. The hog industry isn’t keen on displaying this practice to the public, but in 2010, the Humane Society of the United States (HSUS) planted a camera-toting undercover investigator in a hog facility run by Smithfield Foods, the globe’s largest hog producer and pork processor. You can read the report here, but you can’t beat the video for sheer visceral effect:

In the wake of the exposé, Smithfield saw fit to recommit itself to phasing out the practice in its own hog-production facilities by 2017. (The company had made a similar pledge in 2007 and backed off from it in 2009, claiming that financial losses in its hog-production business made the capital investments necessary for the transition too expensive.) In 2012, its rival Hormel made a similar pledge; and Cargill, another massive pork processor and hog producer, says that it has already phased out gestation stalls in half of its hog facilities. A raft of high-profile companies that use pork in their products—including McDonald’s, Burger King, Wendy’s, Subway, Oscar Mayer, Kroger, Safeway, Costco, Denny’s, Jack in the Box, Carl’s Jr., Hardee’s, Sodexo, Sysco, ARAMARK, and Bon Appétit Management—have promised to stop buying from suppliers who treat pigs in this fashion. And no fewer than nine states have banned the practice, HSUS reports.

The states that have banned gestation crates do not include the four that produce 61 percent of US hogs.

So, gestation crates are on the way out, right? Well, maybe not. Consider that the states that have banned the practice do not include Iowa, North Carolina, Minnesota, or Illinois—the four that produce 61 percent of US hogs*. The ban on gestation crates in Rhode Island is a nice gesture, but not likely to move the industry. Given the power the meat industry wields in these hog-heavy states, it’s hard to imagine such a ban in, say, Iowa.

Now check out this column by Rick Berman, a notorious PR hired gun whose past clients include Big Tobacco, in the industry trade journal Pork Network. If the piece is any indication of the pork industry’s commitment to banning sow crates, then the practice seems pretty entrenched for the long haul. Berman is a battle-scarred veteran of pork-industry battles. During its nasty and ultimately failed fight to stave off unionization at its vast Tar Heel pork-processing facility, Smithfield hired Berman to roll out TV commercials trashing union leaders, Bloomberg reported last year. And Berman’s Center for Consumer Freedom even runs a website dedicated to “Keeping a watchful eye on the Humane Society of the US.”

In his Pork Network column, Berman counseled the industry to simply ignore the push to ban gestation crates. If the industry rallies around Berman’s advice, he assured his readers, “it will prevail.” Displaying his PR skills, Berman cunningly suggests using the phrase “maternity pen” instead of gestation stall, on the grounds that “it’s easier for people to comprehend.”

But the column gets interesting when Berman quite correctly points out that when giant players like Smithfield and Hormel promise to phase out crates, the pledge only applies to the hog operations that they directly run. But they raise only a fraction of the hogs they slaughter and process. The rest come from independent producers. According to Berman, pledges from companies like Smithfield and Hormel, even if they are kept, apply to only 20 percent of the hogs raised in the US. “The vast majority of the remaining 80% of the U.S. swine industry, very few of which are large or publicly traded, has no plans to stop using standard sow housing,” Berman writes. Now, something like two-thirds of US hog production comes from producers working under contract with mega-processors like Smithfield and Cargill, and presumably, these companies could push for a transition away from crates among their contract suppliers. But Berman’s right—they haven’t done that.

He flatly states that “consumers don’t care about the gestation stall issue” without citing any public-opinion data.

That’s really the only cogent bit in Berman’s piece. The rest is assertion unbacked by evidence—mainly, an effort to reassure producers that they can and should continue using tight cages for sows. For example, he flatly states that “consumers don’t care about the gestation stall issue” without citing any public-opinion data. The Humane Society, however, points to two separate nationwide polls—one from the agribusiness-tied American Farm Bureau—finding that a majority of people do favor banning gestation stalls.

Interestingly, Berman appears to be merely repeating and promoting the pork industry’s bottom line agenda here. As Huffington Post reported last week, Fedele Bauccio, CEO of Bon Appétit, which runs cafeterias and cafes for corporations, colleges, and universities nationwide, submitted a rebuttal to Berman’s piece, challenging his undocumented assertions that consumers don’t care about the issue and that companies like Bon Appétit aren’t serious about refusing pork from producers that still use crates.

Pork Network refused to run Bauccio’s piece. In an email to Bon Appétit that I’ve obtained, Pork Network editor and “brand champion” JoAnn Alumbaugh justified the decision by pointing to research funded by the National Pork Producers that found tight gestation crates are harmless to sows. She added: “I can tell you from first-hand experience that pens [gestation crates] are safer for the animals as well as the people who care for them than open pens.” She revealed that she had spent the day attending the National Pork Producers Council and National Pork Board annual meetings, and regretted that Bauccio hadn’t been there to “to visit first-hand with producers and hear their commitment to sound animal care.”

Berman’s article, dubious as it is on many points, is a good reminder of just how hard it’s going to be to wean the meat industry from even its most vicious practices. No one should be lulled by pledges into thinking that the industry intends to change its ways without a much bigger fight.

*Correction: The original version of this article mistook the percentage of US hogs produced by states that have not banned the use of gestation crates.