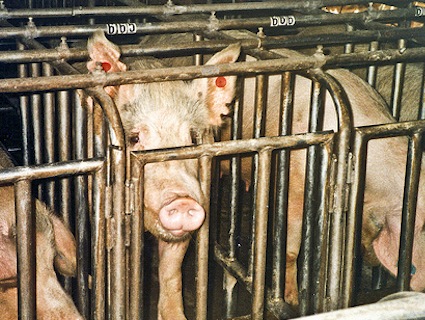 For me, Utah conjures up visions of Mormons and dramatic canyons, not factory-scale facilities stuffed with pigs and hens. Yet the state’s western half contains four counties with “extreme” concentration of such facilities, and three more that rank as “severe,” according to Food and Water Watch. One of those counties, Beaver, is home to Circle Four Farms, a subsidiary of hog giant Smithfield Foods. Circle Four churns out a million pigs per year in just 40 buildings.

Perhaps emboldened by their peers in Iowa, Utah’s state legislators have passed a law that would help shield such farms from scrutiny. Like the recently passed Iowa law, the Utah bill would prohibit people from getting jobs at farm facilities under false pretenses—an attempt to stop animal welfare groups from documenting conditions there.

The Iowa and Utah bills represent a new wave of attempts to protect the meat industry from the scrutiny of watchdog groups. The first wave of bills, which floated around state houses throughout farm country last year, sought to criminalize sneaking cameras into factory farms. Those bills failed because of concerns about constitutionality, Amanda Hitt, executive director of the Government Accountability Project’s Food Integrity Campaign, told me.

The Iowa bill shifted tactics—it criminalized posing as a job-seeker to get employment with the intent of documenting factory farm practices, a tactic that has been used to great effect by animal welfare groups. Apparently Iowa lawmakers felt the new format could withstand legal challenges, because they passed it overwhelmingly last week. The Utah bill started out like a first-wave bill in the state House, and was amended this week in the Senate along the lines of the Iowa one. It now awaits the signature or veto of Gov. Gary Herbert, a Republican.

It’s hard to imagine Herbert vetoing the bill. In 2009, he appointed former Circle Four Farms general manager Rob Adams to the Office of Economic Development’s board.

Meanwhile, in Illinois, a bill that took a first-wave approach—it would have banned surreptitious video-taking—was quietly tabled by its Illinois House sponsor this week.