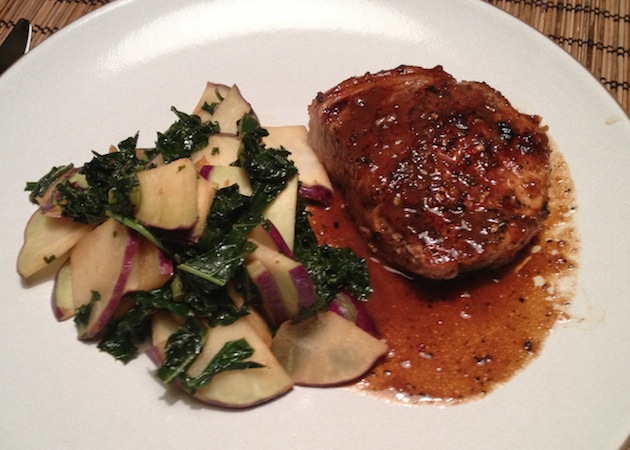 Umami dearest: a little miso pushes this dish over the edge.

At the end of the week, my stock of perishable foods consisted of the following items: a bunch of kale, two knobs of gorgeous, purple-skinned kohlrabi, and a fat pork chop. The veggies were leftovers from the previous weekend’s farmers market run; the chop was an impulse buy after lunch at a new Austin butcher shop/salamuria called Salt and Time, where they buy whole animals from local farmers, break them down, and put the results to various uses: everything from sandwich fillings to cured sausages to a magnificent case of expertly cut steaks, chops, and the like.

Disclaimer: I don’t eat a lot of meat, but I think pastured animals play a critical role in sustainable agriculture. And when I do indulge, I love to buy it from skilled butchers sourcing directly from nearby farms. I have made the economic case for locally owned butcher shops here and here.

Okay, back to the kitchen. My challenge late one recent weekday evening: how to turn these staples into a fast, delicious dinner. My first thought was a stir fry—just cut everything up, sear it off, and then nap it with a quick, soy-sauce-based sauce. But cutting up that beautifully rendered pork chop seemed silly—like taking a scissors to a Picasso canvass to make it fit a tight space. So I decided to sear the pork chop whole and stir fry the veggies as a side dish.

I decided on an East Asian flavor palate—ginger, rice vinegar, and soy sauce. Fermented soy products like soy sauce deliver that ineffably deep, savory quality known as umami. To ramp up the umami factor, I turned to the ultimate fermented soy product: miso, a jar of which had been languishing at the back of my fridge.

2 cloves garlic, chopped
1 knuckle-sized chunk of fresh ginger, peeled with a spoon and chopped
A few whole peppercorns
A good pinch of dark-brown sugar
A robust pinch of crushed red chili flakes
1 tablespoon of rice vinegar
2 tablespoons of soy sauce (my favorite is the sublime Ohsawa)
1 large thick-cut, bone-in pork chop, which will be a half or two-thirds of a pound
Some freshly ground black pepper
1 bunch kale
2 bulbs of kohlrabi
A little cooking oil, such as peanut or sunflower
1 cup water or stock
1 tablespoon miso

First, make the marinade. Pound the first five ingredients in a mortar and pestle until reduced to a coarse paste. Add the vinegar and pound and stir the mixture. Do the same with the soy sauce. Dump the marinade into a container not much bigger than the pork chop. Add the chop, turn it a few times with a tongs to fully coat it, and then let it sit in the fridge. (The chop can marinade for a few minutes, while you prep the veggies, or up to an hour or so.)

Now prep the veggies. Stack the dry kale leaves on top of each other and roll them lengthwise into a cylinder. Slice them crosswise into half-inch strips, stems and all, down to where the leaves end. (This last bit is controversial; most people remove the stems. I find that if the kale is fresh, a bit of stem adds a nice crunch.) Now rotate your cutting board 90 degrees and slice the kale strips again, again in half-inch increments. Place in a bowl and set aside.

Trim the kohlrabi of stems and tough parts. Slice each bulb in half, and place the halves on the cutting board, cut-side down, and slice them thinly into crescents. Cut those crescents in half. Set aside.

Get two heavy-bottomed skillets going over medium on the stovetop: a small one for the chop, and a large one (or a wok) for the veggies. Add a little cooking oil to each. While they’re heating, remove the chop from the marinade, scraping away the chunks with a butter knife. Reserve the marinade in the container, including any chunky bits from the chop, and add a cup of water to it. This will become the base for the miso glaze.

Dry the chop well with paper towels or a kitchen towel that will be set aside for washing before any other use. (This step, while annoying, is critical for properly brown the chop—wet meat will turn a dull gray instead of caramelizing.) 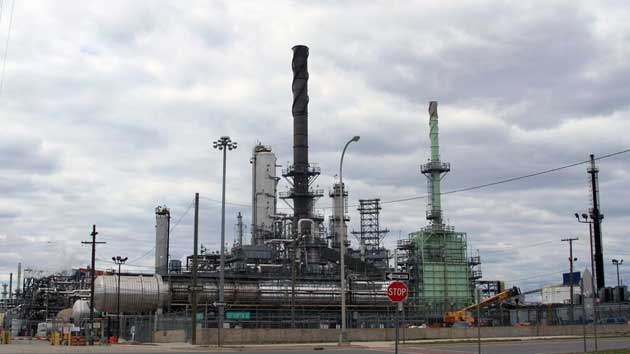 Let it get good and brown—the caramelization adds to the dish’s umami.

Give the chop a vigorous lashing of fresh-ground pepper on both sides, and place it on the smaller, now quite-hot skillet. Let it sizzle.

Now add the chopped kale to the larger, also-hot skillet or wok. Toss the kale in the hot oil until it starts to wilt, add a few dashes of soy sauce to the pan, and turn the heat down to low and cover. Let the kale steam in the covered pan until tender. This won’t take long.

When the chop is beautifully browned on the bottom, turn it over. Let it go a minute or two on the stovetop, and then place it in the hot oven. For a thick-cut chop, finishing in a hot oven is a great way to ensure the meat is properly cooked without scorching.

Meanwhile, when the kale is done, set it aside, and return the skillet or wok to medium heat. Add a bit more oil, then add the kohlrabi. Tossing often, let it sauté until it’s starting to brown and is tender, but still retains a bit of crunch. Now add the cooked kale and half of the watered-down marinade. Add a half-tablespoon of miso, and stir until the miso has become incorporated and the marinade has reduced to a glaze.

By now, the pork chop should be done. I shoot for medium—no rawness, but a touch of pink inside. At that point, the chop should feel firm but springy to the touch. You can also cut into it to take a peak.

Remove the chop to a plate. Pour off any excess fat from the skillet—careful, it will be smoking-hot, Add the other half of the watered-down marinade to the hot skillet, and stir with a wooden spoon to dissolve any caramelized bits on the bottom. (This is known as “deglazing the pan.”) Add the other half tablespoon of miso and stir to incorporate. Let the meat rest another minute or two, and then dump any juices that have accumulated on the plate into the skillet, stirring to incorporate. This is your miso glaze. Cut the chop in half, placing each on a plate. Divide the veggies onto the two plates. Drizzle the miso glaze over each chunk of pork, and serve. A bit of brown rice would be a welcome addition as well.